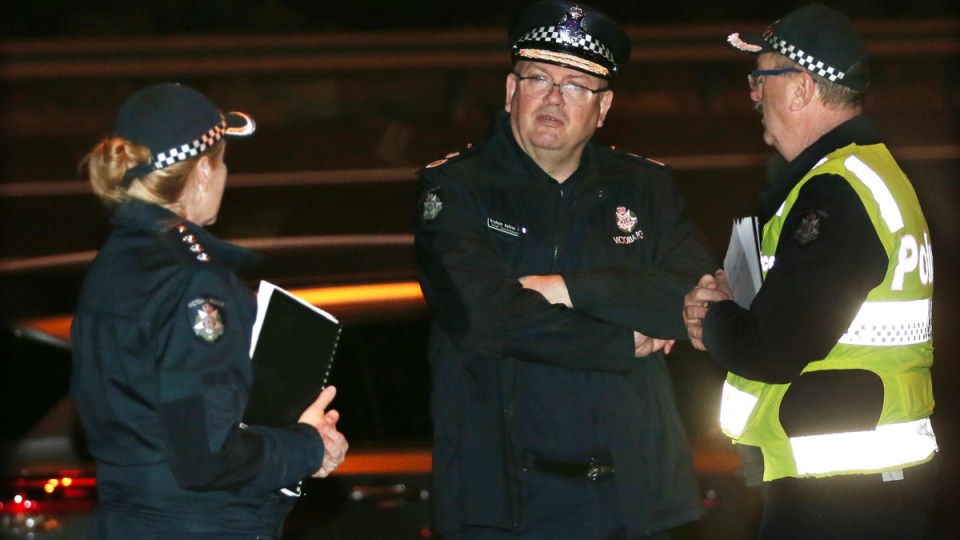 Four police officers killed while pulling over a suspicious car in Melbourne have been remembered as “heroes”, as the search continues for a driver who fled the scene of the deadly smash.

A policewoman and three policemen – one of whom had only just joined the force – were standing on the Eastern Freeway at Kew to question a speeding Porsche driver when an oncoming truck ploughed through the group.

It’s the most officers killed in one incident in the history of Victoria Police.

“Our hearts are breaking with them.

“In the coming days, formal investigations will tell us why – how – this could possibly have happened.

“But one thing is already clear: Though we may not yet know their names – we will always call them heroes.”

Chief Commissioner Graham Ashton went to the scene on Wednesday night to meet investigators and deliver a public tribute.

“It’s a very tragic night for Victoria Police,” he said on the roadside.

He said the tragedy unfolded after two officers intercepted the Porsche, which had been speeding on the freeway about 5.40pm.

They called for backup when they decided to impound the vehicle, and two of their colleagues joined them on the roadside.

A refrigerated truck then ploughed into the vehicles, hitting and killing the officers.

Drove past tonight’s horrific scene on the Eastern Freeway on my way home from work. Have never seen a crash so bad in my life, and it was once my job to go to them. My heart goes out to all involved and to my special @VictoriaPolice family. 💙

It’s thought that during the chaos, the Porsche driver, who was believed to be uninjured, took his chance to run away. He was still at large on Thursday morning.

“I strongly suggest he gets himself down to the nearest police station,” Mr Ashton said.

Aside from any investigation into his own actions, the Porsche driver could provide key details to help investigators – headed up by the homicide squad – determine what caused the truck to crash.

Police said the truck driver had a “medical episode” but they were yet to ascertain whether that came before or after his semi-trailer hit the cars and officers.

He was taken to hospital under police guard and is expected to have his blood tested for drugs and alcohol.

“We don’t know at this stage what has caused him to drive that truck into our police members,” Mr Ashton said.

Images from the freeway showed a damaged highway patrol car and an SUV near a large, white semi-trailer, with Connect Logistics branding.

Police Association Victoria secretary Wayne Gatt said the deaths would cause heartache and shock across the force.

‘‘These police officers were doing something that we do 10 times, 20 times, 30 times a shift – intercepting a motor vehicle on the side of the road, this is the bread and butter of policing,’’ he said.

‘‘This isn’t stuff that you go to do and expect to be killed doing. But each and every time a police officer does that for the next little while, they’ll have this in the back of their minds, there’s no doubt.’’

“Now is the time for people to really thank them,” Ms Neville said.

Parts of the Eastern Freeway remained closed on Wednesday morning. Detours were expected remain until lunchtime as investigations continued.