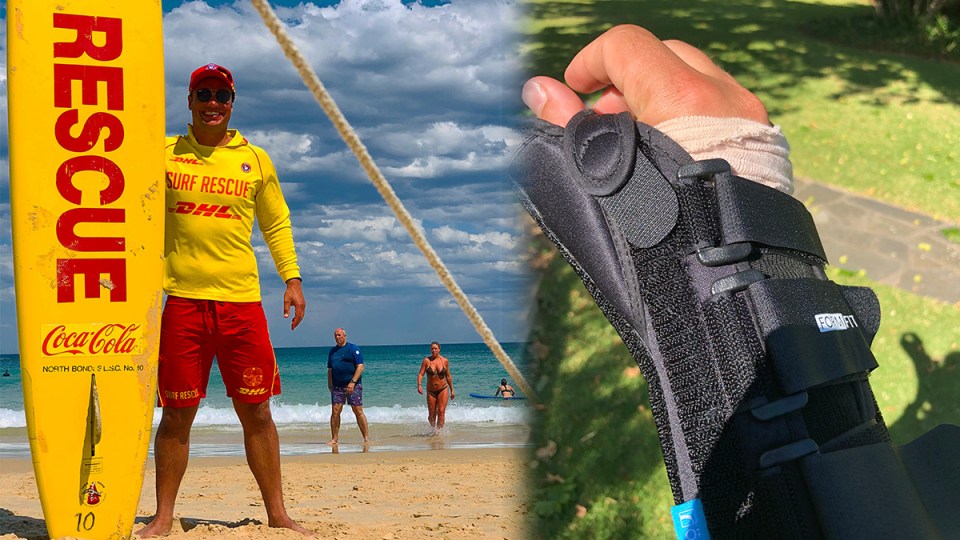 Lifesaver Scott Gibbons will be forced to wait even longer for surgery after he hurt himself in a rescue. Photo: Scott Gibbons

Surf lifesaver Scott Gibbons tore ligaments in his wrist while pulling a swimmer to safety.

Now he has to wait at least six months to be able to use his hand again – all to help save more lives.

Mr Gibbons knows his unexpected wait for surgery is in the “greater good”, but that doesn’t lessen the excruciating pain.

Public and private hospitals have been temporarily banned from performing elective surgeries to ensure they don’t run out of beds or personal protective equipment during the coronavirus pandemic.

The Morrison government’s expectation that the virus will cause significant disruptions for at least six months means patients may need to wait until after the outbreak has been contained to be operated on.

But the Australian Patients Association is warning there could be a backlog that, if not managed properly, may leave people suffering.

“It’s important to clear that backlog as quickly as we can,” CEO Stephen Mason said.

With Victorians potentially being made to wait as long as 18 months, Mr Mason is proposing that the government continues using private hospital beds even after Australia gets on top of the coronavirus, to reduce public hospital elective surgery waiting lists.

Their waiting is “not in vain”, said public health lecturer at La Trobe University, Adamm Ferrier.

The qualified nurse called them “silent heroes” and praised “their sacrifice”.

“I acknowledge their pain and their suffering at the moment but … their forbearance is so people that would die with COVID-19 have a chance of survival,” Mr Ferrier said.

Mr Gibbons was pulling to safety a man who was in danger of drowning at Sydney’s Bondi Beach when he tore two ligaments in his right wrist.

After getting an MRI and X-ray, the surf lifesaver was told he needed to be operated on “straight away”, and his surgery was deemed category 1.

He drove from Sydney to Adelaide, where he knew of a trusted family friend surgeon that could perform the procedure.

He then put himself through quarantine for two weeks at the surgeon’s request, only to be told in the end that the operation isn’t going ahead.

“I can’t have it until the coronavirus has gone,” Mr Gibbons said.

“Even though this is an urgent elective surgery … they [the hospital] basically said I’ve just got to deal with this for the next six months or however long it takes.”

Aside from moving into a friend’s house for help with everyday tasks, Mr Gibbons is having to deal with the “constant pain” of a broken wrist, but understands “it’s for the greater good”.

“Given this is potentially a mid- to long-term situation, six to 12 months, I don’t want to be reliant on painkillers because it is something that could go quite bad quite quickly,” he said.

“I do know of people that have started taking it and have become reliant on it, so I’ve just been trying to suck up the pain.”

Like Mr Gibbons, Catherine, 37, a fitness instructor and freelance journalist from Melbourne, understands coronavirus patients must take priority but that doesn’t make things any easier.

After waiting nearly nine months for a hip replacement, Ms Woods was not far off the scheduled surgery date when she rang her hospital and was told it would be “indefinitely postponed”.

“While the orthopaedic liaison unit has been extraordinarily compassionate, they couldn’t give me any information. That’s really the most difficult aspect of this,” she said.

“More than the physical pain is that psychological buildup of going ‘right I’m going to be unconscious, someone is going to be sawing open parts of my body. I can do this. I’m ready. Let’s go do it’.

“To be then told ‘we don’t know when it’s going to happen, we could call you a week before but then maybe it’ll be another six months’ – psychologically, that’s the difficult part … especially if you are my age and your job depends on your body and your income depends on your body being well.”