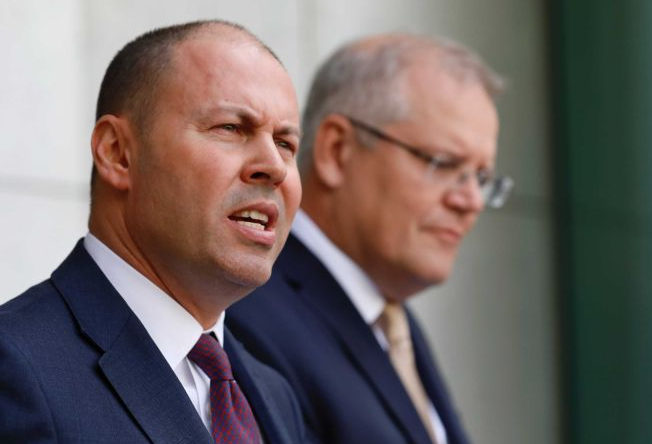 Contrary to PM Morrison and Treasurer Frydenberg's optimism, the OECD sees a long, hard and difficult road ahead. Photo: ABC

Australia’s proposal for the global economy to go into hibernation amid the coronavirus pandemic has been endorsed by the Organisation for Economic Cooperation and Development (OECD), but it has warned countries will not “re-emerge very, very quickly” as Prime Minister Scott Morrison has suggested.

In early March the OECD forecast global growth would halve to just over 1 per cent for this year, but it now expects growth to fall 5 per cent or more.

The Treasurer told the powerful group, which includes the United States and United Kingdom, the global economy should be put into a controlled hibernation while quarantine measures were in place to fight coronavirus.

Mr Gurria told the ABC confinement was the best way to contain the spread of the virus.

“We have to fight contagion, we have to stop the spread for human reasons, for ethical reasons, for moral reasons but also for very pragmatic reasons, in that the longer it lasts, the deeper we will be in the hole, the more GDP we will lose and the longer it will take to get out of the hole,” he said.

“It is in everybody’s best economic and financial interest that the first part, the virus issue, lasts as little as possible.”

“So I would agree with Josh [Frydenberg] that confinement or hibernation — call it what you want — … is the only way is to address the spread.”

Economic hibernation is a key plank in Mr Morrison’s plan to contain the damage from coronavirus. He says it will “enable businesses to re-emerge very, very quickly” and “switch on again and get moving again” once the virus is contained.

“Once the confinement efforts have stopped, we are then going to have to pick up the pieces and they are going to be all over the place,” he said.

“We are going to have a long period [of recovery] and it is going to be longer than just the time which we take to stop the spread of the virus itself.”

“The economic and social consequences will unfortunately be felt for some time to come.”

Despite global leaders holding regular teleconferences since the outbreak, Mr Gurria was very critical of the lack of coordination between nations and said they were not doing enough to fight the spread of the virus.

“So they are talking, they are understanding what the others are doing … but greater coordination has still a lot to grow and thus to benefit.”

He said their lack of coordination meant the impact on the global economy would be much worse than previously hoped.

“For every month of [non-containment of the virus] there will be a 2 per cent reduction in GDP growth,” he said.

“We are now talking about recessionary scenario for most countries in the world.”

In early March the OECD forecast global growth would halve to just over 1 per cent for this year. Mr Gurria said he now expected it to fall 5 per cent or more.

But he praised the Australian Government’s stimulus response to the economic fallout.

“It means you’re moving quite actively and with great agility in responding to the challenges, as have a number of countries,” he said.

“Now the biggest question is coordination among countries. Any country that wants to go it alone does so at its own peril.”

A major concern for the OECD is the potential for widespread social unrest.

Recent work by the OECD, whose members account for about a fifth of the global population, found one third of OECD households would fall into poverty if they had to forgo three months’ income.

It also suggested half of middle-class people in OECD countries would fall below the middle-class level if they lost only three months of income.
Your questions on coronavirus answered:

Mr Gurria said the OECD was “extremely worried” this would happen, given the shutdowns across the globe.

“You are going to have millions of people who are going to be in that situation, and therefore the impact on inequality will be very severe,” he said.

There would be serious economic, financial and political consequences.

“Already you are looking at this crisis on top of what was very clear rising discontent around the world,” he said.

“This makes the most vulnerable hit the hardest and you are going to see a lot of very serious tensions, social tensions, political tensions.”

He suggested governments should “drop the rule book” on government spending and managing debt.

“The ultimate duty of governments is to protect the people, to see after the wellbeing of the people, and in this case to protect them against this very harsh and dramatic impact that they are suffering,” he said.

Eventually governments would have to account for the costs, but for the time being they needed to keep pouring money into economies so people could stay home, he said.