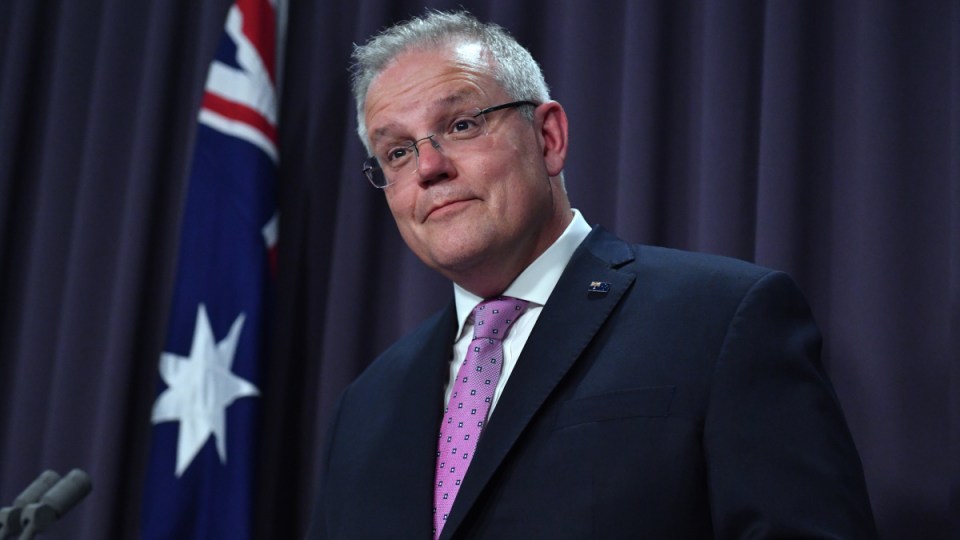 In times like this, a country needs a leader – not a politician. Let's hope someone told Morrison. Photo: AAP

Contained within the German language is a single evocative word that probably describes the way Labor MPs have been feeling since the Morrison government announced its Coronavirus health and economic stimulus package on Friday.

That word is Schadenfreude, which essentially means taking pleasure from someone else’s misfortune.

For more than a decade, Labor has been trying to live down the bad reputation it gained during the last time it was in office, when the prime minister at the time, Kevin Rudd, and his treasurer, Wayne Swan, injected billions of dollars into the Australian economy to inoculate it against the ravages of the Global Financial Crisis.

The tragic irony for Labor was that the bold cash splash was successful – Australians were spared from the worst economic impacts of the global recession and were therefore left none the wiser about the bullet we had dodged.

Instead of being grateful for being spared from a recession, we focused on the mistakes made by the Rudd government in its rush to get the cash out the door.  Such as the $900 cheques sent to dead people, over-priced school halls and the tragic outcomes of the poorly implemented home insulation program.

At the time, Labor already had a problem with older Australians who remembered its spendathon during the Whitlam years, and then a whole new generation was left with the impression that the party was as responsible with money as a drunk in a casino. This view may have also been reinforced by the big spending promises made by Labor during the 2016 and 2019 federal elections.

This is borne out in a recent opinion poll, published this week, which found 40 per cent of those surveyed believed the Coalition is better at managing the general economy, compared with 31 per cent for Labor. Although it should be noted that the survey also found respondents believed Labor was superior when it came to managing the economy for workers, older Australians, and people living in regional communities.

The Coalition’s electoral success in recent times, with John Howard in office for nearly 12 years, and the triumvirate of Abbott/Turnbull/Morrison for seven years so far, has almost entirely been based on voters’ perception that it was the superior economic manager.

To date, Rudd has been the only Labor opposition leader able to pierce that shield, by successfully arguing during the 2007 federal election campaign that John Howard’s “reckless spending must stop!”

If current opposition leader Anthony Albanese wants to take Labor to an election win at the next federal poll, he will also have to find a way to neutralise the Coalition’s strongest asset.

Just three months ago, PM Morrison called the former Labor government ‘economic panic merchants’ for implementing its ‘wasteful’ GFC stimulus package. The temptation would now be great for Mr Albanese to play up the Coalition’s hypocritical change of heart on the merits of economic stimulus, perhaps by telling his opponent that it “Sucks to be you,” next time they meet in parliament to debate passage of stimulus legislation.

There may even be battle-scarred MPs from the Rudd/Gillard years still within Labor ranks who’d like to see some retribution taken for the Coalition’s decades of economic hubris.

is sick and resting up. Diagnosis Rudd Flu – brought on by copious amounts of public debt. Pandemic warning in place.

As Paul Bongiorno wrote earlier this week, shadow treasurer Jim Chalmers, who worked for then Treasurer Wayne Swan during the GFC, cranked up the pressure by claiming “Australia needs this government to do a better job managing these challenges.”

Economist and former adviser to former PM Julia Gillard, Stephen Koukoulas, posted on Twitter “I am staggered that the government is still waiting to announce, let alone deliver anything to avert a recession. What does it need to see before acting?”

However Mr Albanese has promised voters to take the high road in an effort to repair voters’ confidence in politicians and politics. So far in response to the Coalition’s stimulus package he has been constructive, calling for parliament to be returned a week early – namely next week – and offering to help the government quickly pass the necessary legislation.

Australians want clear information, based on expert medical advice, to help us get on top of this pandemic and keep families safe. pic.twitter.com/vbrj5GKLsp

“Labor will expedite any passage of legislation through both houses of Parliament,” Mr Albanese said on Friday.

The Opposition leader did note however that this spirit of cooperation did not come with a blank cheque.

“Of course, we want to examine the legislation to see if improvements can be made, but we want to be constructive.”

He said Labor would pay particular attention to measures that affected casual workers and low-income earners. It would also examine the regional investment fund “to make sure that the sort offences that we have seen in the sports rorts won’t happen [again]”.

What happens next could be a pivotal point in Australian politics.

When a global health crisis paired with a domestic economic crisis is threatening the nation, a genuinely bipartisan approach is needed. Albanese has proffered the hand of cooperation (albeit with caveats) and appears to have resisted the initial temptation to extract political mileage from the government’s misfortune.

Now it is up to Mr Morrison to respond in kind. If the PM insists on playing partisan politics during the crisis, risking the cooperation of Labor and ability to provide help where it is needed, he will be guilty of putting his own interests before those of the Australian people. Voters won’t forget such an act of selfishness.

Some things should be above politics – and this is one of them.

Paula Matthewson: Why Scott Morrison needs to put Australians ahead of political advantage