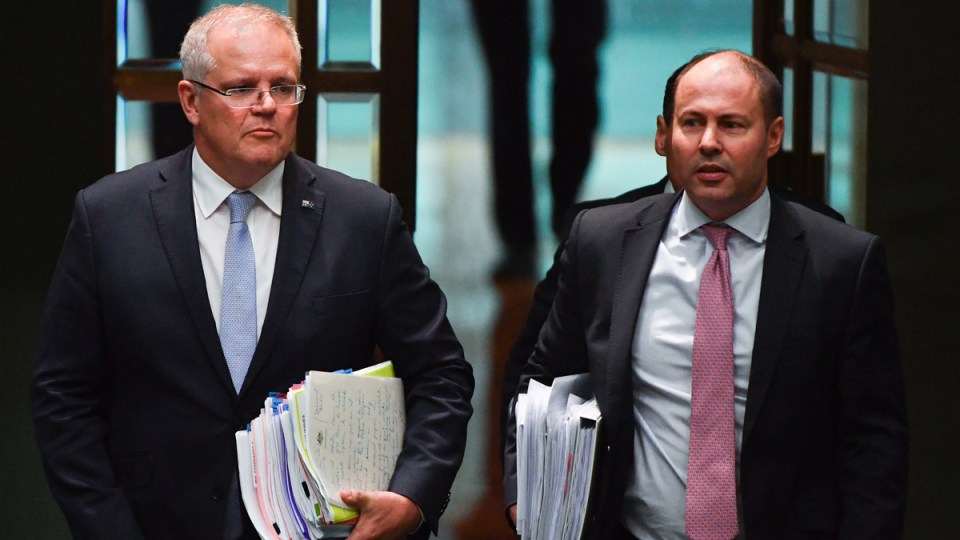 The Morrison government is scrambling to come up with an economic stimulus package that doesn’t look or sound like the Rudd Labor government, but one that can succeed in keeping Australia from sliding into debilitating recession.

For the past 10 years the Liberals have taunted Labor for its last period in government promising surpluses but failing to the deliver them.

The failure sealed Scott Morrison’s boast in the run up to the last election that Labor could not manage money and only he has “already delivered a budget surplus next year”.

Mr Morrison and his Treasurer Josh Frydenberg, according to background briefings to chosen journalists, have already given up on this premature hubris.

Maybe they are managing expectations, but there will be something obscene if they deliver a surplus while letting the economy slide into recession.

In fact, there is almost certainly no wriggle room left with the double whammy of an embarrassing deficit and a gut-wrenching recession looming.

The catastrophic bushfires and the coronavirus have left them nowhere to hide from an economy that was already underperforming, with downward revisions the flavour of every official update.

Wayne Swan, the treasurer at the time of the Global Financial Crisis and mercilessly lampooned by Mr Morrison and Mr Frydenberg, has long resented what he felt was the dishonest and opportunistic denial of reality of his political opponents and their media cheer squad.

The acid test now is with this government.

Will it allow its ideological lip service to non-intervention and its demonising of welfare recipients – particularly the unemployed – stymie any chance of a meaningful stimulus?

One regional small business owner summed up the malaise by pointing to his underemployed casual staff, overstocked shelves due to the bushfires smashing demand, and seriously slowing trade.

The mooted business tax cuts and investment incentives mean zero to people in these circumstances.

What would have an almost immediate effect would be to lift the Newstart unemployment payment and give casual workers an income stream if they lose shifts.

Later today Industrial Relations Minister Christian Porter will meet in Sydney with peak employee and employer groups to discuss worries for casual and other workers about their job security.

Mr Frydenberg avoided directly answering questions on whether he would raise the Newstart payment or extend it to casuals who lose shifts.

Government sources say there is no way either will happen.

She wrote to the PM last week about her concerns that the 3.3 million casual workers in Australia without paid leave still might go to work “because they could not afford to isolate themselves”.

This is “both a health risk as well as an economic one”, Ms McManus wrote.

The unions are not impressed by the suggestion Newstart be paid to these workers as it would still be a significant loss of income so pitiful is the payment.

But there is sympathy for the government reimbursing employers who keep workers on or measures like extra sick leave, or a special leave allowance.

Whatever is included in the stimulus briefed out to be as much as $10 billion – identical to Labor’s first GFC stimulus, its delivery will surely have to be more efficient than the much-touted $2 billion bushfire relief package which appears stillborn.

Shadow treasurer Jim Chalmers was not off the mark when he said on Monday “Australia needs this government to do a better job managing these challenges”.

Economist Stephen Koukoulas is not alone in a sentiment he posted on Twitter: “I am staggered that the government is still waiting to announce, let alone deliver anything to avert a recession. What does it need to see before acting?”

The answer, probably, is the willingness to eat humble pie.