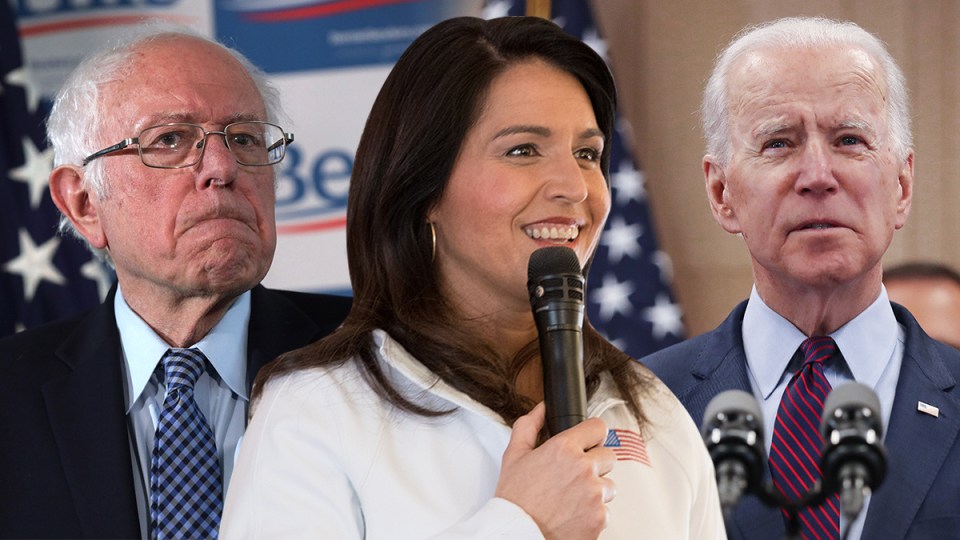 When Melbourne woman Laurie Staub casts her vote in the Democratic primary election this weekend it will carry a lot of family history.

Americans who live in Australia will be able to vote for who they want to see go up against Donald Trump in November’s presidential election by heading to a local polling station on Saturday. Still in the running are Joe Biden, Senator Bernie Sanders and Tulsi Gabbard, who represents Hawaii in the US House of Representatives.

Ms Staub will be choosing Mr Biden. She met him four years ago, when he was vice-president, and in Melbourne to open the city’s Comprehensive Cancer Centre.

She told him of her ill 95-year-old mother, and how her father and sister had both died from brain tumours. She got a response she never expected.

“Get her mother’s number. I want to call her now,” she recalled Mr Biden telling his aide after she expressed how her mother Nancy thought the “sun shone out of his eyes” and he could do no wrong.

Mr Biden phoned Nancy, who was asleep at her South Carolina home.

“My mother never kept the phone in her room so when I told her the next day … she was horrified she missed the call.”

Come Saturday, Ms Staub, who works in the not-for-profit sector, will be sliding a vote in the ballot box for the Democratic presidential candidate.

“I was just so touched that he would even take that time to acknowledge my mother,” she said.

“Sure, he makes gaffes – who doesn’t – and sure, in hindsight, he might have made different decisions along the way, but it is time we take the lead to bring decency and honesty and empathy back into governments.”

After 27 years of calling Australia home, US-born Stefan Moore’s desire for a better America has not waned.

Mr Moore will be driving down to Sydney’s Palace Hotel on Saturday to cast a ballot for the independent democratic socialist from Vermont.

Why? Because, as Mr Moore explained, Mr Sanders’ promise of Medicare for All, a Green New Deal, tuition-free public colleges and the re-allocation of military spending to other needs is “really, really vital to the American people”.

Her unwavering support for the US senator comes from the fact he’s built a campaign on small donations, not corporate handouts, and sustained “a more pragmatic track record in the Senate than he’s generally given credit for”, she said.

The 36-year-old Victorian who works in public health research will also be casting a ballot on Saturday.

She said the values underpinning Mr Sanders’ political philosophy and the changes he hopes to make have been clear and consistent.

“Consistency is key when going head-to-head with Trump, as Trump will latch onto any hypocrisy or skeletons in the closet,” Ms Vaisey said.

Mr Sanders also understands that “issues like Medicare for All are life-or-death issues and people cannot afford to wait”, she added.

Self-described political junkie Marissa Parkin had Elizabeth Warren as her first pick until she dropped out of the race on Friday.

“It’s basically the Bernie Sanders agenda with an actual plan. She’s healthcare for all, she wants to cancel student debt, she’s for free college, paid family leave, all things that are incredibly important to me and I think are just basic rights that any first world country should be providing to their citizens.”

“Bernie by far has the strongest progressive platform … I also believe Bernie is more electable. Biden is not going to inspire any enthusiasm or hold up well on the campaign trail.”

Andrew Baldyga, 32, is gung-ho about Mr Sanders who he says is unlike many other American politicians.

“He stands for something and has been standing for the same things for the past 40 years,” he said.

Mr Baldyga wants to see the US establish a national healthcare system and lift the minimum wage.

“Having worked quite a few minimum wage jobs, it is quite hard to pay rent and eat on the current minimum wage. Impossible to put money away for retirement.

“I fall to the far left in terms of American politics, and having previously voted for Bernie I have no problem doing it again.”

Americans Downunder turn out to back Sanders or Biden