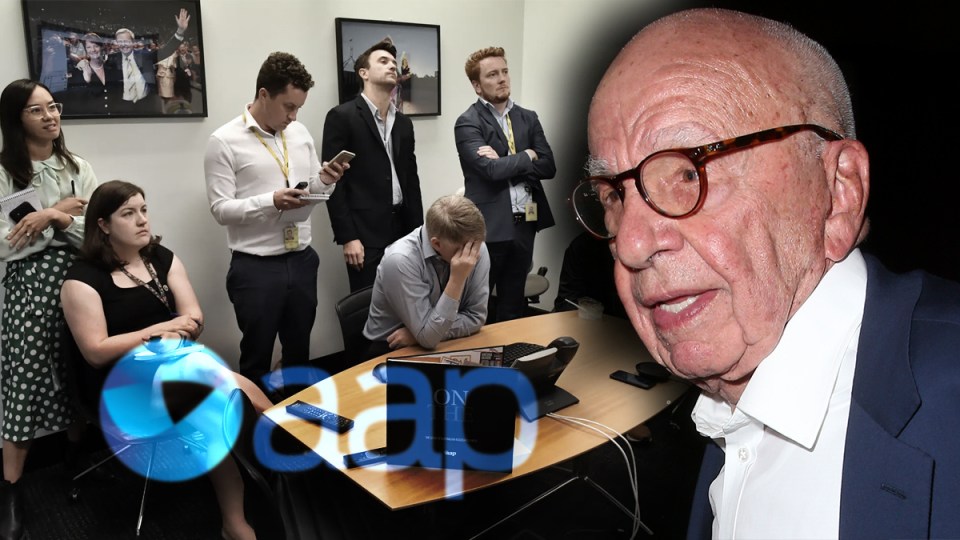 After repeatedly asserting that unfair competition from tech companies  Google and Facebook brought about AAP’s demise, new reports indicate News Corp and Nine might have had a more cynical motive for closing the decades-old news agency and putting hundreds of staff out of work.

AAP management announced on Tuesday that, after 85 years of servicing the Australian media industry, the news service would close on June 26.

About 180 jobs will be lost from AAP’s editorial arm, with hundreds more expected from other divisions.

On Thursday, The Guardian reported that AAP chairman Campbell Reid, who is also a News Corp executive, told AAP staff that Nine and News Corp were tired of subsidising a breaking news service for their competitors.

Mr Reid was quoted as telling staff in AAP’s Melbourne bureau that News Corp would develop its own breaking news service.

It has also been reported that Nine is considering a similar move.

Mr Reid reportedly said that News Corp was “committed to the supply of breaking news”, adding “we don’t have to supply it for everybody else in Australia who’s telling us that they don’t want it”.

The Australian Competition and Consumer Commission has not announced an investigation, but confirmed on Thursday it was looking into the closure.

“The ACCC is aware of the announced closure of AAP and is keeping abreast of potential issues that may arise,” it said.

A spokeswoman said it would need to find that competition would likely be lessened to raise concerns.

The New Daily, The Guardian, The Daily Mail and the former Fairfax regional mastheads now controlled by Antony Catalano all rely on AAP for breaking news and photography.

Former ACCC chairman Allan Fels told The New Daily that while it was unlikely a legal problem with AAP’s closure could be proved, it would diminish competition and was a “landmark moment in the history of Australian journalism”.

Dr Fels said AAP has long formed the backbone of much of Australia’s journalism, particularly smaller newspapers, and was also quite an important ingredient for News Corp and Nine.

“It covers things that often the major newspapers aren’t resourced to do and it provides material for countless smaller newspapers,” he said.

“I’ve been saying for a while that public-interest journalism is shrinking as we speak. But this is a spectacular example.”

“As a customer of the service, no one thought to contact us to discuss options, such as increased syndication fees, restructured offerings or equity,” Mr Hamra said.

“We might have paid more – so, I hear, might have other customers, which could have helped the AAP business model. But no one asked.

“I get the impression News Corp and Nine just want to set up their own newswire service instead, with their own content, controlling more of the market and restricting access for new Australian journalism ventures.

The Media Entertainment and Arts Alliance on Thursday said News Corp and Nine “must answer for the decision to shut AAP”.

“News Corp and Nine said the reason for shutting down AAP was that it was no longer financially viable and had been damaged by the proliferation of free news on social media and digital content aggregators,” MEAA federal president Marcus Strom said.

“However, today’s reports suggest a more sinister motive: The closure is designed to deliberately harm their print and online rivals who subscribe to AAP for news about politics, sport, business, courts and crime, and for breaking news.

“The fact that they didn’t put AAP up for sale indicates News and Nine simply wanted AAP shut down.”

The loss of the extensive news coverage provided by AAP means consumers around Australia will lose a trusted, reliable, accurate and impartial source of vital information.

“The media bosses responsible for the decision to shut AAP should pledge to employ any AAP editorial staff who want to remain in journalism,” Strom said.

Dr Fels, who is chairman of the Public Interest Journalism Initiative, said public-interest journalism was shrinking and AAP’s closure was a “spectacular example”.

He said declining local journalism meant less court reporting and matters of concern to the local community, and called on the government to step in.

Dr Fels flagged tax breaks, subsidies, scholarships and training support as potential ways to boost journalism.
“It’s a fact that in the UK, Canada and parts of the US, and France as well, the government has been stepping in to protect the continuation of journalism, to give it some boost, especially local journalism,” he said.
Follow Us