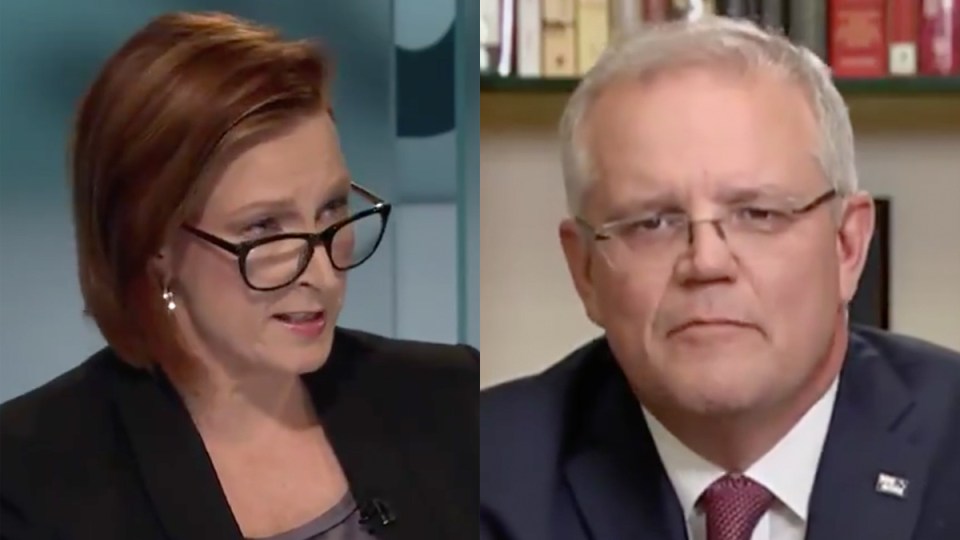 Scott Morrison has clashed with the ABC’s Leigh Sales during a testy interview in which she questioned his “excessive secrecy” over his trip to Hawaii, the sports rorts affair and his links with Hillsong Pastor Brian Houston.

The Prime Minister came under fire on ABC TV’s 7.30 on Tuesday night after he finally admitted he had tried to get Pastor Houston on the guest list to a White House dinner during his historic US trip.

Sales asked if his secrecy was a problem with voters.

“Back to the trust question. You want Australians to trust you. Does this excessive secrecy help that?” Sales asked.

“I don’t accept the assertion you are putting to me. You are making accusations … Like the Labor Party does,” the Prime Minister said.

“If you want to join in on the accusations that the Labor leader makes in Parliament every day,” Mr Morrison said.

“I am not interested in what the Labor leader has to say,” Sales said.

“You are not answering what I am asking.”

.@leighsales: "What about the Brian Houston thing, why did you keep that secret?"@ScottMorrisonMP: "I was in the US. We had a meeting with the President. It was not a matter I was intending to be distracted by … At the time I could have answered the question differently." pic.twitter.com/c483kN2aL5

The Prime Minister said he had now disclosed what happened with Pastor Houston and he did regret not being more transparent on the Hawaii trip.

“I have disclosed the issues you have referred to. In relation to one of those matters I could have been more candid at the time about it. I wish I was. Frankly, it wasn’t a big deal,” he said.

When Sales tried to get him to answer a question again and said sorry when she pressed the point, the Prime Minister offered an acid response.

“No, you can interrupt,” he replied.

"The National Audit Office reviewed this matter, made recommendations and we adopted all of them and the minister resigned." – Prime Minister @ScottMorrisonMP on the sports grants saga. #abc730 #auspol pic.twitter.com/ZpqLMoUMxs

Earlier, he told 2GB’s Ben Fordham that Pastor Houston’s name was put forward and he didn’t know what the controversy was about.

“I’ve known Brian for a long time and Hillsong Church has a very big network of churches all across the United States and the ministry when it comes to the music, and so many other things have been very big – it’s probably the single largest church organisation that is known in the United States,” Mr Morrison said.

“So I’m not quite sure what the accusation is about that.”

.@leighsales: "How is it possible that you don't have an economic centrepiece beyond a slogan for jobs and growth?"
Prime Minister @ScottMorrisonMP: "Well I completely reject that."#abc730 #auspol pic.twitter.com/oZVwrR75sa

Fordham then said it was relevant because Pastor Houston was under police investigation over his handling of allegations of sex abuse involving his father, Frank Houston.

But Mr Morrison said US President Donald Trump “didn’t have an issue with it” because Pastor Houston was recently invited to the White House.

“So the President obviously didn’t have an issue with it. And that’s what I think. That’s where the matter rests.”

In September, The New Daily revealed that Mr Houston remains under police investigation for failing to report his father’s sexual abuse of children.

The confession came after months of stonewalling on the issue, including when he was questioned in Parliament.