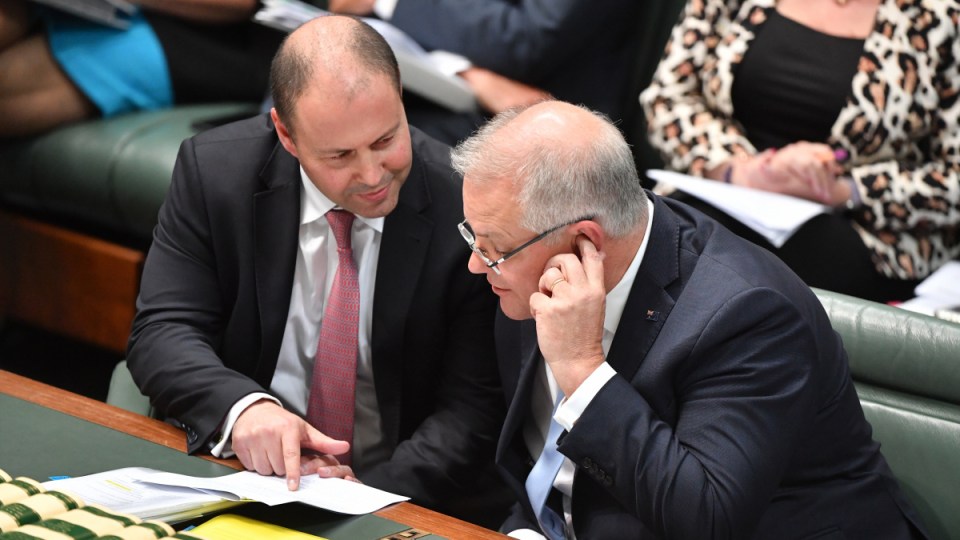 For well over a year now the Morrison government has ignored the pleas of the Reserve Bank to get serious about stimulating the economy.

The consequences of this disengagement from a situation deteriorating before their very eyes on a monthly basis are about to get very painful for the Prime Minister and his treasurer.

The Reserve Bank has run out of the capacity to help, with its emergency interest rate cuts already well below the levels during the Global Financial Crisis 12 years ago.

The market is split on whether the board at its Tuesday meeting will lower the rate from its historic low level of 0.75 per cent.

If it does there is a consensus among leading economists that it won’t do much to get things moving.

Analysis by Michael Pascoe in The New Daily is that if business is not investing now it has nothing much to do with the cost of borrowing but with “deteriorating corporate investment confidence”.

The RBA may edge closer to zero rates, which in itself is evidence of an economy woefully underperforming despite the boast of Treasurer Josh Frydenberg in Parliament that the International Monetary Fund in January found it is doing better than the United States, Canada. Japan, Germany and France.

Up until now Mr Morrison has been captive of the Liberals‘ overblown political attacks on the Rudd/Swan Labor government’s stimulus that in the GFC saved Australia from recession, business failures and  job losses.

Labor was reckless and extravagant is the oft-repeated mantra.

The Prime Minister was not quite so brazen as he announced he was working on a “response plan” to the coronavirus that would be revealed in the “not too distant future”.

Note as he “trembles to action” as one wit observed, Mr Morrison – who ignored the calls of the RBA, business, the unions and the opposition for the past 12 months to do something – is now claiming the “unforeseen shock” of the coronavirus is the reason for his change of tack.

He revealed he and the treasurer had been in discussions with the Reserve Governor on Monday morning to “talk through the impact” of the virus on Australia and the global economy.

This prompted speculation that a rate cut is more likely, if for no other reason to signal all the levers are being pulled.

Mr Morrison said he’ll be focusing “on ensuring we keep Australians in jobs, we keep business in business, and we keep investment flowing”.

So targeted stimulus is on the way, the treasurer insists it won’t be reckless, but the real concern in government ranks is that it won’t work.

The collapse in Mr Morrison’s credibility over summer is thought by some to be a real obstacle.

Wayne Swan, who was named as the Finance Minister of the Year in 2011 for his GFC stimulus, says tax cuts won’t work.

He says “they need specific measures to get people to spend more rather than save”.

Shadow treasurer Jim Chalmers says there are a range of things they could do: Lift Newstart, which would flow directly into the struggling retail sector, have a wages policy, bring forward part of their tax cuts, and have a tax break for business investment.

But what is particularly ominous for the government that boasted better economic management credentials and a “back in black” budget surplus is the collapse in China’s manufacturing output.

Our biggest trading partner could be heading for a recession with new export orders collapsing, buying levels plummeting, and employment contracting.

If our biggest customer is hurting, there is no escape for Australia.

PM Scott Morrison trembles on the brink of stimulus