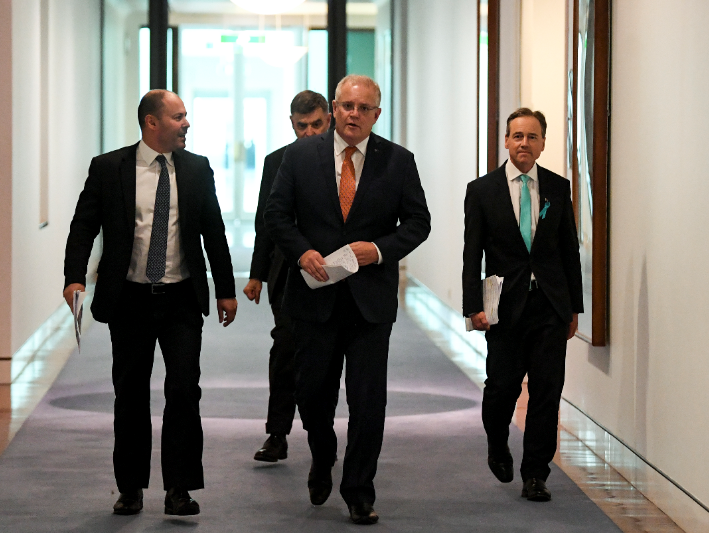 Morrison & Co were beset by scandal and failed promises. What a difference a week - and the coronavirus -- can make in politics. Photo: AAP/Lucas Coch

After being continually slammed by the Labor opposition in parliament this week over the ‘sports rorts’ affair, Prime Minister Scott Morrison used one of the oldest tricks in the political handbook on Thursday afternoon to wipe the deepening scandal from the headlines.

The trick, as described by the infamous political strategist Niccolò Machiavelli, is to “never waste the opportunity offered by a good crisis.” Or as British PM Winston Churchill once said, “Never let a good crisis go to waste.”

In this case, PM Morrison pulled off a clever ‘look over there!’ moment by using the coronavirus crisis – announcing that the Government had decided not to wait for the World Health Organisation (WHO) to declare that the virus had become a global pandemic, instead formally activating its own pandemic emergency response plan.

As expected, this ‘leadership initiative’ by the Morrison Government became the lead story on the nightly news broadcasts and newspaper front pages the following morning. Some reporters and commentators even suggested the decision to move before the rest of the world showed the PM had learned from the bushfires that he should not wait for others before taking action.

There might be some truth in that observation, but there is also no avoiding the fact that the timing of the announcement neatly turned a very bad political week into a moderately good one for the Government – at least according to the very limited amount of news that unengaged voters tend to consume.

The week had started with beet-faced Barnaby Joyce bellowing in front of the cameras during a faux confrontation with Labor’s Joel Fitzgibbon over the threat that a net zero emissions target would pose to flatulent cattle.

It got worse when Treasurer Josh Frydenberg had to start walking back his and the PM’s boastful claim to have ‘delivered’ a surplus in the 2020 budget, which is a feat of twisting the time-space continuum that would impress even Doctor Who.

After years of taunting Labor’s former treasurer, Wayne Swan, for making a similar mistake during the Rudd and Gillard years, our former Liberal Treasurer, now Prime Minister, Scott Morrison, and his successor, Josh Frydenberg, were treated to merciless ragging by Labor’s economic team for admitting to this ‘failure’ in economic management.

And then there were the ongoing sports rorts revelations, which have increasingly implicated the Prime Minister’s office with each new fact. Not to mention the additional ‘grant schemes’ that have been uncovered as little more than election-promise slush funds.

Then there is the unofficial stoush that continues to roil within the Coalition over climate action (see Barnaby bellowing, above).

All in all, it was a week from which the Government should have emerged looking dishevelled, bruised and somewhat humiliated. Instead, it came out looking like a hero. Coalition strategists must be kicking themselves that they had to waste such a good announcement in a week when Newspoll wasn’t in the field.

It should be said that to point out the PM’s sleight of hand is not to downplay the seriousness of the coronavirus threat or the importance of the action being taken to protect Australians from it.

At least the impending crisis is real, not one confected simply to deflect attention like the 16-flag press conferences held by a previous prime minister to breathlessly announce that an asylum seeker boat was intercepted last month, or some such.

However, given the import of the other issues that unfolded this week, Scott Morrison should expect the positive reviews from his pandemic announcement to last only a few days. Next week will bring a fresh round of parliamentary scrutiny and redoubled efforts to bring the Government to account.