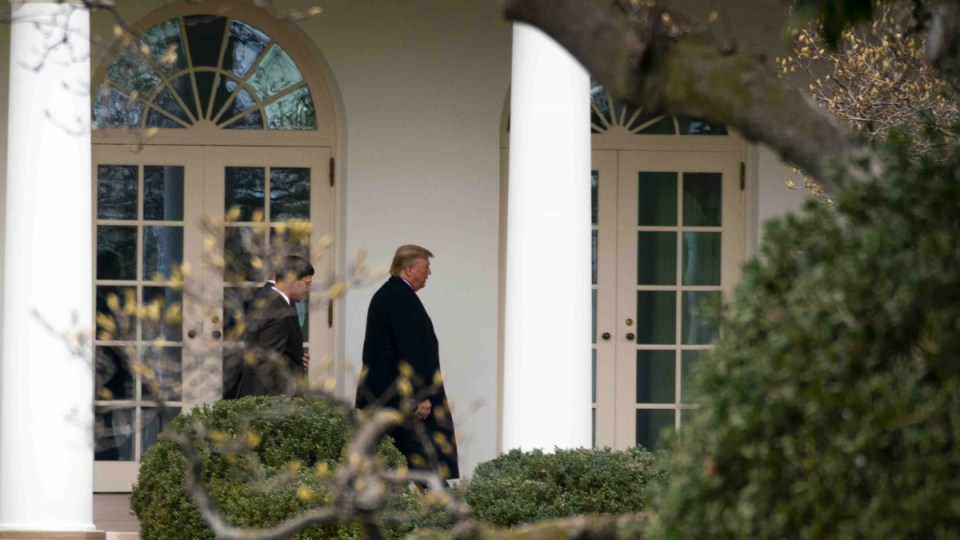 Donald Trump was acquitted after a three-week Senate impeachment trial, but the damage is still being felt at the White House. Photo: NYT

The rise and rise of Bernie Sanders in Sunday’s resounding victory in Nevada demonstrate he’s the frontrunner in the pack of Democrats vying to take on Donald Trump.

But it’s not just the senator’s growing popularity across ages and cultural backgrounds that could have Team Trump worried.

There’s a threat much closer to home: The president’s own men.

In the aftermath of the impeachment inquiry in which staffers testified against him, Mr Trump has now hired a ‘spy’ to identify traitors in the halls of the White House.

It comes as a number of staffers resign or are shuffled out of their jobs for apparent disloyalty to the US President, with a top national security official the latest to get the boot.

John Rood, the former Under Secretary of Defense for Policy at the Pentagon, reportedly resigned last week at the request of Mr Trump.

Mr Rood was in Mr Trump’s firing line for raising concerns last year about the president’s plan to deliberately withhold military aid to Ukraine – a key issue that helped trigger the impeachment inquiry.

His sudden dismissal places him among a growing number of senior level advisers who have already walked out of the White House’s revolving door.

One reason for the mass exodus is Mr Trump’s expectation of absolute loyalty from his staffers.

Anyone who questions his authority is risking their career.

Efforts to identify traitors in the administration ramped up last week with the hiring of a new personnel chief, John McEntee, whose job is to uncover disloyal officials.

It is understood his first task is to investigate personnel at the State Department and Department of Defense.

Several top staffers, including national security adviser Michael Flynn, chief of staff Reince Priebus and communications director Anthony Scaramucci, have had the shortest tenures in the history of their jobs.

More recently, it appears the latest spate of officials who have left their posts are those who provided damning evidence to Congress during the impeachment inquiry.

Backed into a corner, many of them were forced to choose between their political ambition or their sense of duty.

Now, they are paying the price.

The staffers who’ve left … so far