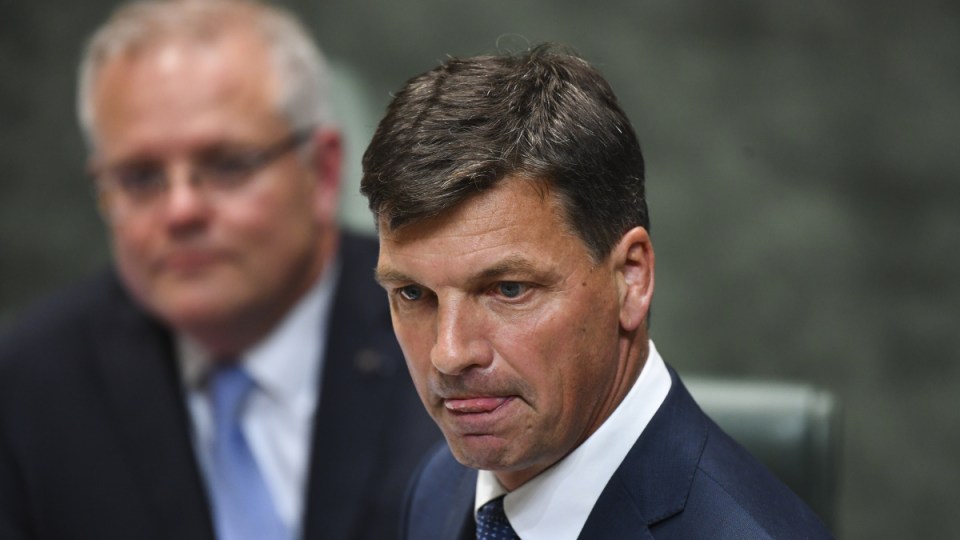 Angus Taylor, Australia’s energy and emissions reduction minister – yes that is his real title – is counting on the fact he won’t be in Parliament in 2050 and in the meantime any argument against doing something meaningful about climate change will do.

The Rhodes scholar, after 20 years in business before entering Parliament, believes he knows a thing or two about the way it works, but there is one key performance indicator he and the Business Council of Australia can’t agree on.

It is net zero emissions for Australia by 2050.

BCA chief executive Jennifer Westacott – along with some of the country’s biggest resources companies like BHP, BP and Santos, and agricultural giants the National Farmers Federation and Meat and Livestock Australia – have all adopted this KPI as a target to encourage investments to mitigate against economy-wrecking climate change.

Mr Taylor, like his Prime Minister Scott Morrison, says he won’t adopt this target because it is uncosted, unfunded and unplanned.

The Coalition target rather is Labor’s adoption of net zero, which the world’s scientists including the CSIRO warn is the planet’s last chance to keep warming to 2 degrees Celsius.

It is now on a trajectory to reach 3 degrees and keep rising.

Labor agrees with business and not the contradictory political hyperbole coming from the government.

Ms Westacott says once the target is endorsed then the significant actions – indeed massive adjustments required – can be shaped.

In question time on Monday Mr Taylor made the absurd observation that Australia at Paris had signed up only to global net zero emissions by 2050, arguing we have to play our part and it won’t involve adopting that as a national target if resources jobs are at risk, agriculture is included or electricity prices are affected.

Instead he is working on a long-term strategy in which technology will be the centrepiece “because that’s how the globe is going to solve the problem”.

We could see his handiwork as early as this week.

It will have to be some plan.

BCA estimates Australia will need an annual $22 billion investment in new technology and a doubling of current renewable energy generation capacity by 2040.

Blunting Mr Taylor’s attacks is his refusal to cost the price of failure to address climate change.

And that despite the Prime Minister admitting in an answer to the Sydney independent Zali Steggall that “there are costs associated with climate change” but he did not rise to her challenge to spell out what a 3 degree rise would do to job creation and economic growth.

Greens leader Adam Bandt told Parliament estimates of damage from the current bushfire disasters is in the range of $4.4 billion if narrowly confined to physical assets and infrastructure.

It is up to a more credible $100 billion if we include tourism losses, human health and ecological destruction.

Just as revealing of the true state of affairs is the latest report of the Energy Security Board – an agency set up by the Liberals.

Contrary to Mr Morrison’s boasting we are a world leader in renewable investment, the report says this investment slumped 40 per cent in 2019.

The ESB blames “the lack of strategic direction” that has led to stakeholders deferring investment “in maintenance and construction of new generation, especially in flexible, dispatchable generation”.

Labor says it will consult business and stakeholders to map out a pathway with interim targets to get to net zero.

Labor’s Joel Fitzgibbon on Monday gatecrashed a Barnaby Joyce doorstop and tried to say he “is going to reach out” to primary producers.

A red-faced Mr Joyce bellowed that this was “a load of pig manure” and that “net zero emissions means net zero seats for Labor in regional areas”.

Appealing to intelligent argument is clearly a waste of time as far as he and the Coalition is concerned, better to go for emotional fear mongering.

It pays political dividends, but it leaves the reality of the planet untouched.