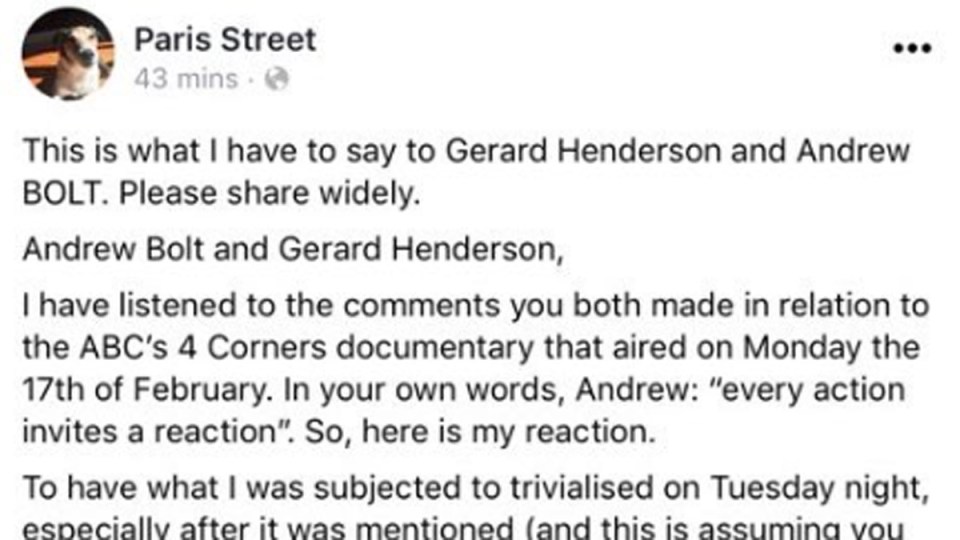 The child sex abuse victim identified in the St Kevin’s College scandal highlighted on Four Corners has posted a reply on social media to the controversial comments made by two high-profile media commentators.

Urging others to share widely after posting on Facebook, Paris Street criticised Andrew Bolt and Gerard Henderson for “trivialising” his experiences on Sky News’ Bolt Report.

Accepting Bolt’s assertion that “every action invites a reaction”, Mr Street asked that both check their facts, update their knowledge of what ‘grooming’ meant, and urged them to display greater sensitivity to victims of sexual abuse.

“To have what I was subjected to trivialised on Tuesday night, especially after it was mentioned (and this is assuming you have actually watched the entirety of the documentary), that I hoped telling my story would be the first step to moving on, is inconsiderate particularly when Gerard, you make the comment: “well of course we’re sympathetic to the victim”,” the post read.

“If you displayed any sympathy towards me, you wouldn’t be minimising what was inflicted upon me.

“I was invited to jump into a 59 year old’s bed … The Facebook messages he sent me. I was fifteen. He was convicted of grooming me.

“For your own knowledge, (it clearly needs enhancement), please refer to the relevant legislation of what grooming actually is … “The offence of grooming concerns predatory conduct undertaken to prepare a child for sexual activity at a later time.

“Please refer to the findings of that royal commission because this might enhance your knowledge (and hopefully some understanding) of the pain and suffering that victims endure from not being supported.

“Just to make it clear: I returned to St Kevin’s because this is where my friends were, my twin brother was (and I don’t know if you’ve ever tried doing this) but settling into another school at the same time you’re giving evidence in a criminal trial as a victim of sexual abuse isn’t very easy.”

“If you paid particular attention to the documentary Andrew, (I think this is necessary especially when you intend to make comments on a sensitive topic), you will note that he wasn’t, in your own words “later jailed”,” the post reads.

“He was in fact, and as Louise mentioned in the documentary “sentenced to a community corrections order and placed on the sex offenders register for eight years”. Just a fact check.

“Now lastly Andrew, to say that “the school hadn’t had any complaints against him” well, this might well be true.

“… Please, both of you, build some common decency and human courtesy into what is required in relation to sexual abuse. Especially if you are to make public comments about it.

“… How would you feel if someone acted the way Peter Kehoe did towards me, towards children of your own?

“Would your comments be any different?

“Reflect on the comments you have made and never make them again in the future. They make me sick.”