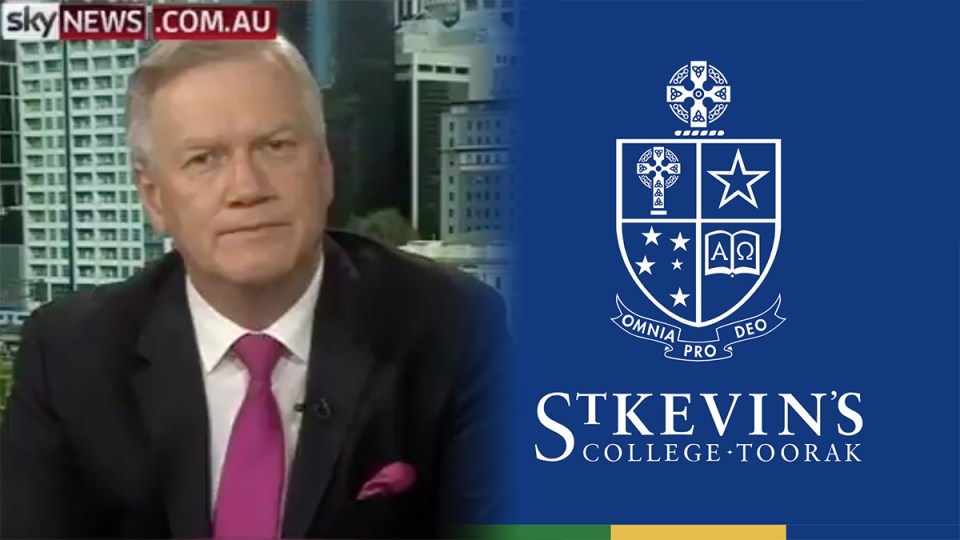 Is it ever acceptable for a man to “hit on” a boy?

Is it ever OK for a teacher or coach to make lewd comments and describe graphic sexual acts to a student in their early teens?

Few of us would need to think about how we respond to those questions.

As the mother of two boys in that age group, the suggestion that one of my sons might encounter that sort of treatment, especially at the hands of someone tasked with their care, makes me gag.

And then, quite frankly, it makes me want to kill somebody.

And yet those questions lie at the heart of a media brawl that has erupted after an ABC Four Corners expose on Monday night.

The program revealed how a young man named Paris Street was systematically groomed by an athletics coach he had met through his prestigious private school, St Kevin’s, in Melbourne.

Walkley Award-winning journalist Louise Milligan then detailed how Paris was failed utterly by those at the school who should have made his care their first priority.

Instead, the St Kevin’s hierarchy seems to have been most concerned about shutting down negative publicity.

When the matter went to court, the school’s dean of sport Luke Travers provided a glowing character reference for the coach, and the principal Stephen Russell also tendered a reference detailing his long history of service at the school.

In court, at least, justice prevailed.

Peter Kehoe was found guilty of the grooming of a child, sentenced to a community corrections order and placed on the sex offenders register for eight years.

Perhaps that is where the sad, horrible story should have ended.

Paris Street, who was so damaged by his experiences while at St Kevin’s that he later spent time in a psychiatric hospital, may finally be able to begin rebuilding his life, having had the courage to speak up.

Better yet, the Four Corners investigation might have triggered a public discussion about why our institutions, including some of our most well-funded and esteemed schools, still haven’t grasped the critical lessons from the Royal Commission into Institutional Responses into Child Sexual Abuse, two years after it delivered its final report.

But on Tuesday night, high-profile commentator Andrew Bolt chose to take the debate in an entirely different direction.

Fronting The Bolt Report on Sky News, the host summed up the Four Corners story like this: “An ex-teacher who hit on a boy at that school, no sex occurred, hit on the boy, later jailed for grooming. The headmaster gave a character reference.”

He then turned to his guest Gerard Henderson and posed the question: “The ABC last night made that sound terrible. How terrible was it really?”

The response from Henderson: “Well, not at all. It was a terrible pile-on against St Kevin’s.”
Both Bolt and Henderson extended their sympathies to “the victim”.
“But if you look at the hard facts of this case, and the time when this occurred, these are not grievous problems,” Henderson added immediately.

They then proceeded to decry what they depicted as an ABC vendetta against the Catholic Church and, in this case, the unfair treatment of St Kevin’s principal Stephen Russell.

Really. This was the way two of Australia’s leading commentators chose to interpret and report a detailed 45-minute program, in which a young man described in grotesque detail how he had been treated by a trusted adult.

I would prefer not to include those details. They are stomach-churning.

But, given Bolt’s question “How terrible was it, really?” and his description of this as a “hit on” … Just imagine your teenager – or any young person you care for –  being asked by a coach or teacher to lick pre-ejaculate from his erect penis, among other comments.

Bolt: “How terrible was it really?”
Henderson: “Well, not at all. & it was a terrible pile-on against St Kevin’s.” BoltWorld, where grooming child, asking to lick ejaculate, is, says Bolt, ‘hitting on’ him. Where headmaster writing reference for convicted sex offender’s no biggie https://t.co/NCdlwk0piT

It’s important here that I detail all the words exchanged as directly and specifically as I can. (Given Sky has not posted the whole program, I am relying on clips from 10Play, which you can watch here.)

It’s important because the discussion generally and, in particular, Bolt’s depiction of the predatory behaviour as a “hit on” and his minimisation of the abuse – “no sex occurred ” – sparked outrage across social media.

In turn, Bolt and others have struck back, accusing their critics of mischaracterising what he and Henderson said.

They have taken particular umbrage at Twitter posts that added “just” or “only” to Bolt’s description of Kehoe’s acts as a “hit on”.

Bolt believes that to suggest he said the coach “only hit on” Paris Street is a malicious mischaracterisation of his words.

On Wednesday night he went further, saying the ABC and Milligan particularly had “falsely, maliciously and hurtfully” suggested that “I was in some way dismissing or trivialising what happened to that boy”.

So this is where we have arrived.

Somehow, in this topsy-turvy world, we have arrived at a place where two of Australia’s leading conservative commentators – one of whom has enormous reach through newspapers and television, and frequently boasts that he has the ear of the Prime Minister – can hear a story as grave and troubling as Paris Street’s, and their first reaction is to defend the Catholic Church and the principal involved.

And their second response, upon being held to account for their exchange, is to claim victim status for themselves.

But when it comes to child sexual abuse, there is no space for playing silly word games.

There is no time for prosecuting petty cross-media paybacks.

Andrew, this was never about your use or otherwise of “just” or “only”.

It was about what you chose to highlight in a tragic story that could still happen to any of our kids.

To be clear: When a man grooms a boy, when he suggests he lick his penis, it’s never a “hit on”. It’s sexual abuse.

When teachers turn their backs on students at risk in their care, it’s never defensible.

It’s a reprehensible failure of responsibility with potentially catastrophic consequences.

When powerful media figures try to depict themselves as the victims, while shoving “the boy” they do not even acknowledge by name into a corner, making him collateral damage in their broader culture wars, then they are in danger of failing the Australian public – and particularly our kids.

Paris Street was the victim here. And now he is the hero.

The backbiters and grandstanders are all just making noise.

The article first appeared on the inQueensland website. View it here

St Kevin’s scandal: Andrew Bolt plays victim while other parents are sick to our stomachs