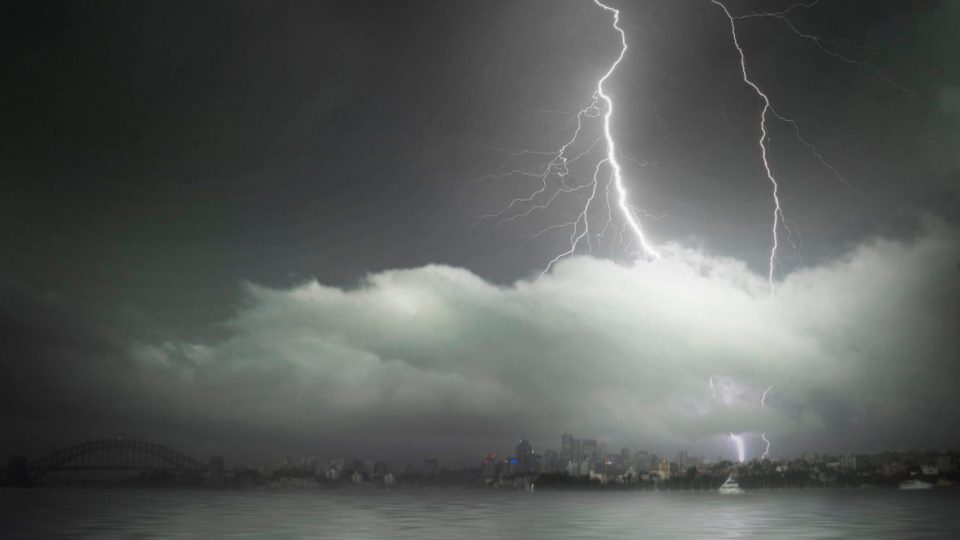 Residents across eastern states are waking up to chaotic scenes after a night of destructive storms left tens of thousands of homes without power and at least one person dead.

In a freak storm-related accident in Sydney shortly before midnight Tuesday, a man died after a gas bottle flew into the air and struck him as he walked along Harrington St in The Rocks.

Witnesses rushed to the man’s aid and took him to a nearby hotel where they were met by police who continued CPR.

The 37-year-old was then rushed to St Vincent’s Hospital but his injuries from the force of the bottle were so severe that attempts to revive him had failed, NSW Police confirmed in a statement on Wednesday morning.

Pretty sure we're all about to die… #sydneystorm pic.twitter.com/6sKKqKUtS9

The repeated lightning and damaging wind gusts were enough to cause trees and power lines to fall across Sydney, with huge hailstones hitting streets across the central and southern parts of coastal NSW.

There seems to be no respite in sight, with the Bureau of Meteorology predicting that thunderstorms are likely to continue in central NSW during the early hours before moving towards the northeast by Wednesday afternoon.

A plane flying through the lightning storm. The world’s hardest of hard passes for me… #SydneyStorm #Lightning pic.twitter.com/ICrKpHgAPa

An additional 72,000 properties have been left without electricity after Ausgrid’s power network was severely damaged by the intense lightning storm across Sydney.

Damaging winds of about 90km/h pelted Nowra on Tuesday night and were expected to move into Wollongong due to a trough.

NSW SES spokesman Jason Simms told ABC radio that volunteers had been called to 600 jobs in the Sydney metropolitan area since 9pm on Tuesday, with most requests for assistance related to downed trees and branches.

So the #sydneystorm was a bit full on in Bondi last night. pic.twitter.com/CHnQ8guHd7

There's a weird near-silent lightening storm wrapping 270 degrees around my house but no storm overhead… It's spooky #sydney pic.twitter.com/zHegB6NdTD

In Victoria, SES took 300 calls for assistance on Tuesday as some Geelong residents were advised to stay inside after a dam wall collapsed and caused flooding along Rivergum Drive near the Barwon River.

The rain intensified throughout the day as golf ball-sized hail battered the city, causing drains to overflow and flood into Southern Cross Railway station.

I don't claim to know how the drainage works at Southern Cross station, but shortly after the deafening downpour started, water started gushing onto the tracks out of a few drainholes?? 🤔 (plt 12) #melbweather #metrotrains pic.twitter.com/XunH3SsMYn

The bureau predicted winds would strengthen throughout the day but heavy rainfall was unlikely due to fast-moving thunderstorms.

Cooler weather conditions are expected as a cold front moves through NSW from southeast parts of the country.

A dry air mass means southern parts of NSW could have temperatures drop below 20C, particularly in the Southern Ranges and South Coast region.

Western NSW regions are not expected to have any significant rainfall over the next few days.

Gale warnings are in place for the Eden Coast and strong wind warnings for the Macquarie Coast, Hunter Coast, Illawarra Coast and Batemans Coast.

Hazardous surf warnings are also in place for the Illawarra Coast, Batemans Coast and Eden Coast, with the NSW Police Marine Area Command advising people to consider staying out of the water.