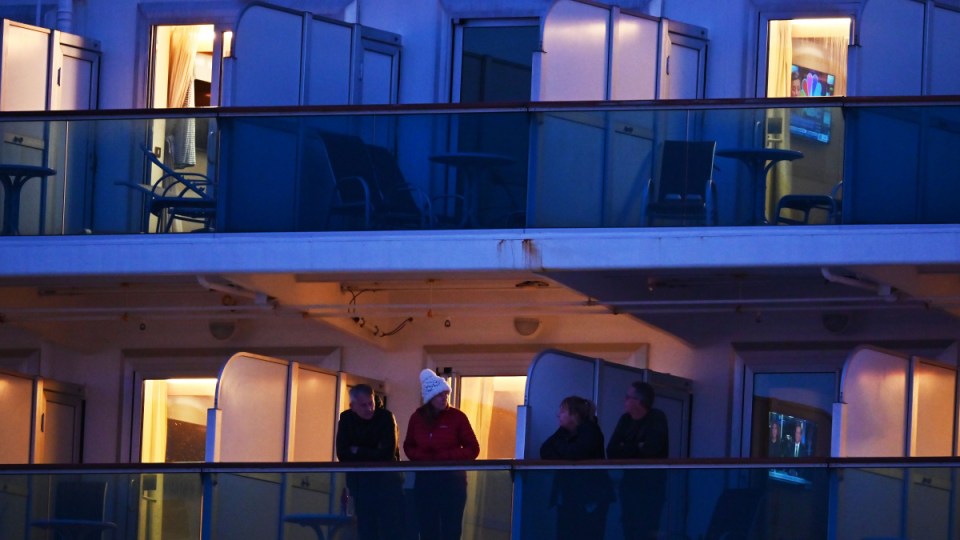 Quarantined passengers on Diamond Princess await news of their evacuations from Yokohama on Tuesday. Photo: AFP/Getty

Australian evacuees from the Diamond Princess face a series of tests before they are flown to Darwin after more than a dozen US tourists cleared for evacuation from the cruise ship subsequently tested positive for the coronavirus.

The breakdown in quarantine suggests Australia’s approach of waiting to evacuate citizens until the testing was complete may have been a more prudent approach, but that’s little comfort for frustrated passengers.

More Australians have also now tested positive for the virus, with reports the numbers have climbed as high as 30 passengers in the Australian contingent.

Late on Tuesday night, Japanese authorities reported another 88 cases, bringing the total cases on Diamond Princess to 542 from the original 3700 passengers and crew.

The Government will assist Australians on the #DiamondPrincess via medical air departure with @Qantas. Our absolute priority is their safety & public health in 🇦🇺. Passengers are being contacted by @dfat with details. Thanks to Japan for their care of Australians in hospital.

But Australians who have tested positive for the virus and been treated and cleared by Japanese medical teams will be free to return home without serving a quarantine period.

They may be able to return home faster than those on board who have already tested negative.

Health Minister Greg Hunt confirmed on Tuesday that passengers would face five tests, including one on the cruise ship and two on the plane home.

A huge thanks to the Darwin community, @NatTraumaCentre & @DeptDefence for their tremendous support through this difficult time. pic.twitter.com/m1YAzlf1bX

Brisbane woman Katherine Jones said she felt safer on the cruise and was concerned the evacuation plan could endanger passengers.

“If every one of us isn’t infected by the time we get there, it will be a miracle.

“So there we will be, in Howard Springs all infecting each other, after the Petri dish trip to get there waiting to be the last man standing.”

At least 170 Australians are expected to be evacuated to Darwin over the next 24 hours, but there are reports up to 20 Australians would prefer to serve out their quarantine in Japan rather than join the rescue mission.

Those that refuse to go can disembark and remain in Japan, but cannot enter Australia during the quarantine period.

In a letter to Australians on board, medical authorities have warned those that refuse the offer could face a long wait to return home.

“Some of you may expect that, after the planned release from quarantine by Japanese authorities after 19 February, you could make your own way home to Australia on commercial flights,” the letter states.

“The AHPPC advice is that this is not possible without a period of formal quarantine.

“Accordingly, the Australian government will ensure that any passengers from the Diamond Princess who are not on the Qantas charter flight will be identified and not allowed on other flights to Australia until Wednesday, 4 March, 2020.

“Even if you board another aircraft, you may be prevented from entering transit countries as they impose their own travel and quarantine arrangements.”

The dangerous mission is far more fraught than earlier missions to evacuate Australians because of the mass outbreak aboard the cruise ship.

Announcing a $2 million research grant on Tuesday to fight the virus, Prime Minister Scott Morrison said he understood the proposed additional two-week quarantine period for Australians on board the cruise was difficult.

“We thank them for their patience. We understand how terribly frustrating it must be for them,” Mr Morrison said.

“But we’re doing this because of the best medical advice, which is on display here.

“We have the best information of anyone in the world when it comes to this, thanks to the wonderful work that’s being done here.

“And that means we can make decisions which are about protecting Australians’ safety.”

Coronavirus crisis: More than 300 Americans thought State Dept. was flying them to safety after they had been trapped on the infected Diamond Princess cruise ship in Japan. Then they realized 14 people on their 2 planes had the virus. w/ @motokorich. https://t.co/qcUKyDmAMt

In a statement, a US State Department spokesperson said the American evacuees were all deemed asymptomatic and fit to fly before being processed for evacuation.

It was only after that evacuation process began when passengers had left the ship and gone to the airport, that US officials were notified that 14 passengers, had been tested two to three days earlier and tested positive for COVID-19.

“These individuals were moved in the most expeditious and safe manner to a specialised containment area on the evacuation aircraft to isolate them in accordance with standard protocols,” the spokesperson said.

More than 30 Australians have now caught the COVID-19 virus on the Diamond Princess cruise ship, the site of the biggest outbreak of the virus outside of China.