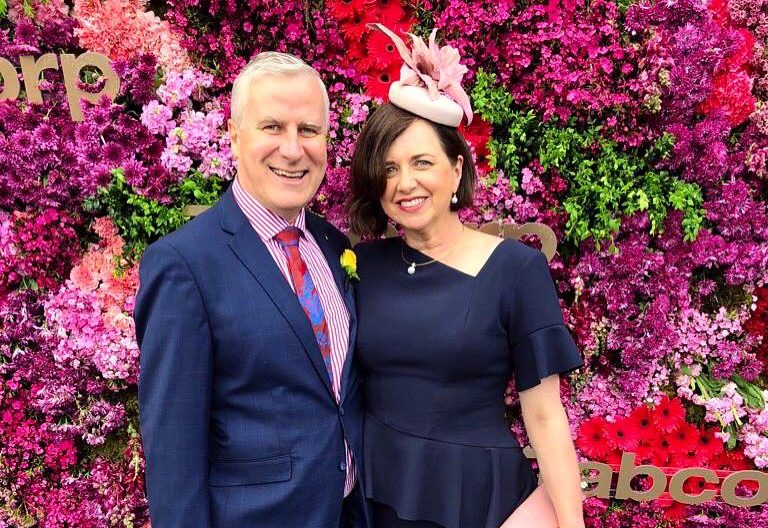 Deputy PM Michael McCormack and wife Catherine, pictured at the Melbourne Cup in 2018, are regulars at the races. Photo: Twitter

Nationals leader Michael McCormack has been accused of organising a party meeting in Victoria to coincide with the Melbourne Cup by the rebel MP who sensationally quit to sit on the crossbench.

Ex-Nationals MP Llew O’Brien quit the party and blindsided his former leader by teaming up with Labor to secure the role of Deputy Speaker on Monday.

By doing so, he allowed Nationals MPs to travel to Melbourne at taxpayer expense under the rules, before enjoying the free hospitality at the races.

With much of Australia in drought, did Deputy PM and Nats leader Michael McCormack really spend much of the last 4 days on the booze with gambling, racing and billionaire interests in inner city Melbourne. Here he is pictured in The OZ with Gina Rinehart. pic.twitter.com/004X4sOsNC

The New Daily has contacted Mr McCormack for his response.

Licking her lips with anticipation perhaps of what might happen in the next half hour … mighty mare Youngstar, foaled in the #Riverina & No. 24 in the ⁦@FlemingtonVRC⁩ #MelbourneCup2019 – one of only 2 Aussie-bred horses in the race that stops a nation. Go you good thing! pic.twitter.com/kpbSmjasBH

“I raised strong objections to that. It was a party meeting that ended when a race was on in Melbourne,” Mr O’Brien told The Australian.

“I wasn’t comfortable with that and I raised it with both the leadership and the party room.

“There are certain things in my mind that tend to be glaringly obvious that you shouldn’t be doing.

“And going to a sporting event or organising a meeting to coincide with another event that is not covered by your travel entitlements is one of those things.

“It was only after my protests that the people going there paid part of their own way. And I would say that a response from certain party (MPs) in relation to that was quite negative towards me, and ­inappropriate.”

At least five Nationals MPs including Mr McCormack, and his deputy Bridget McKenzie, Darren Chester, Michelle Landry and Kevin Hogan enjoyed a day at the races.

Mr O’Brien secured the position of deputy speaker on Monday in a shock win by 75 to 67 votes.

The embarrassing parliamentary defeat on the floor of Parliament for Scott Morrison involved at least five Nationals MPs secretly voting for Mr O’Brien instead of their colleague and Mr McCormack’s preferred candidate Damien Drum.

After a testy Nationals party room meeting where Mr McCormack was called “a liar” as he insisted he had not traded votes in the leadership ballot for the deputy speaker role, his critics got their revenge by teaming up with Labor to reject Mr Drum’s candidacy.

By quitting the Nationals, he also gets to skip one meeting a week when he travels to Canberra on top of his $42,250 pay bump.

Bizarrely, Mr O’Brien will continue sitting in the joint Coalition party room, which includes Liberal MPs but not attend the Nationals meetings.

Another Barnaby Joyce backer, Nationals MP Ken O’Dowd, praised Mr O’Brien for quitting, declaring he was impressed “he had the balls to do it”.

Mr O’Brien has left open the door to returning to the Nationals if Mr McCormack is dumped.

Putting on a brave face, Prime Minister Scott Morrison told Parliament the rebel MP was “doing a great job”, insisting all is not as it seems after Mr O’Brien quit the Coalition to sit on the crossbench.

In question time, Labor leader Anthony Albanese highlighted the split, asking “how can the Prime Minister claim to lead a stable government when, on the day set aside to pay respect to victims of the bushfires, the Nationals decided to have a leadership challenge, and today a National Party member quit, threatening the government’s control of the House.

“When Australia needs stable government, why do we have a coalition of chaos?”

But the PM insisted this was not the case.

“The leader of the opposition does not represent the situation in the government at all. Not at all,” Mr Morrison said.

“Here are all of our members, and the Member for Wide Bay is up the top there. He’s doing a great job.

“What do we have from those opposite? Each way.

In a statement, Mr O’Brien said he continued to regard himself as a member of the Morrison government.

“I support the government and I support Prime Minister Scott Morrison, and every decision I make in Canberra will continue to be in the best interests of Wide Bay,” he said.

Mr Joyce said the decision of the Queensland MP to quit the party was “sad” and he hoped he returned.

Cup runneth over: Rebel MP accuses Michael McCormack of orchestrating a day at the races