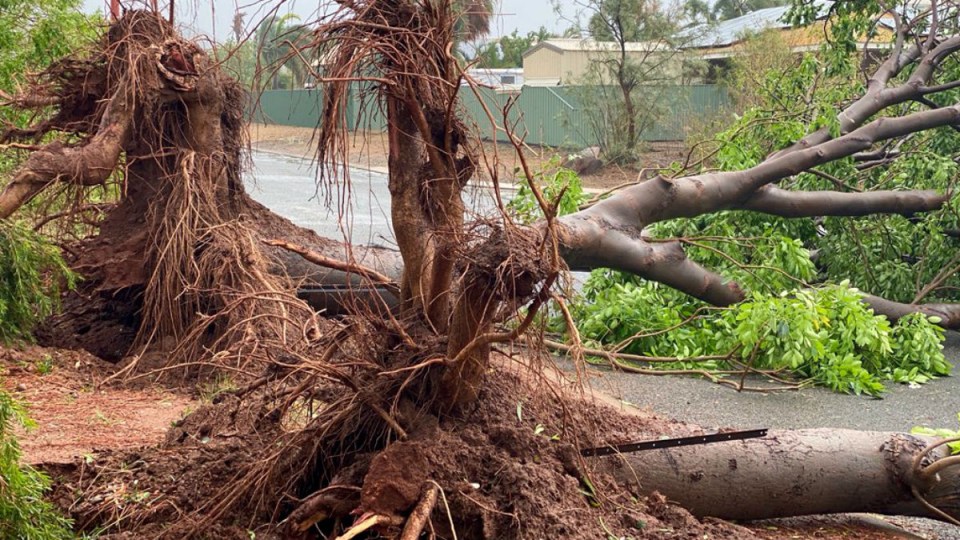 Cyclone Damien caused destruction with winds of more than 200km/hr as it crossed the Pilbara coast. Photo: Twitter

Destructive winds of more than 200km/hr have uprooted trees and lifted roofs as Cyclone Damien crossed the West Australian Pilbara coast where thousands of people have been in lockdown.

The category three severe tropical cyclone made landfall near Dampier late Saturday, bringing fierce gales to the industrial port and the nearby city of Karratha before weakening.

From the Pilbara to Paddington, NSW, torrential downpours have been dousing bushfires, soaking parched pastures and turning formerly dry watercourses into torrents while adding to the pressures on emergency officials.

Heavy rain is expected to cause flooding in WA’s Pilbara and Gascoyne regions, with falls of up to 300mm or more possible in some areas.

Across the country in NSW, rain continued to bucket down, with residents across Sydney, the Illawarra and the South Coast urged to prepare themselves.

The BOM issued flood warnings on Sunday morning for the Bellingen, Tweed, Manning and Hawkesbury rivers and Wallis Lake after overnight rainfall.

The Bureau of Meteorology expects widespread rainfall to continue on the state’s coast, after some stations in northern NSW recorded more than 300mm within 48 hours.

A severe weather warning for very heavy rain, high winds, large waves and tides has been issued along the entire coast from the Northern Rivers region to the South Coast.

“Potentially we haven’t seen anything like this since the late 1990s,” Ms Golding said.

Dampier WA Currently in the eye of the cyclone, this was before. @BOM_WA has wind speeds of over 200kph #CycloneDamien #cyclone #Dampier #Karratha #westernAustralia #cyclonealley pic.twitter.com/Ju3R3zm71E

BOM senior forecaster Jordan Notara on Saturday afternoon said they could see 100 to 200mm falling over metropolitan Sydney and surrounds within the following 12 to 24 hours.

The NSW SES has received more than 2600 calls for help since midnight on Wednesday and responded to at least 20 flood rescues, mostly involving motorists who drove into floodwaters.

On Saturday night they urged residents across Sydney, the Illawarra and the South Coast to prepare for heavy rain and potential flooding.

The NSW SES said residents in rural areas should move stock and equipment to higher ground.

A video was posted online of a man driving his jetski past a McDonald’s down a flooded street in Tuggerah on the Central Coast.

Two women have had to scramble through the window of their 4WD, in a frantic escape as it sank in floodwaters in the state's north. #9News pic.twitter.com/RLf37fc9zG

It drew swift condemnation from NSW Police minister David Elliott, who labelled the driver a “boofhead” and asked police to investigate.

BOM says the trough bringing persistent rain and windy conditions will continue extending into the southern coast on Sunday.

Damaging wind gusts exceeding 90km/h are possible along the coastal fringe between Ulladulla and Forster, and damaging surf conditions are forecast to develop on Saturday night or Sunday.

BOM also warned that the burned-out landscape and loss of vegetation on the fire-affected South Coast had left it vulnerable to landslips.

There were 38 fires still burning throughout the state on Saturday evening.