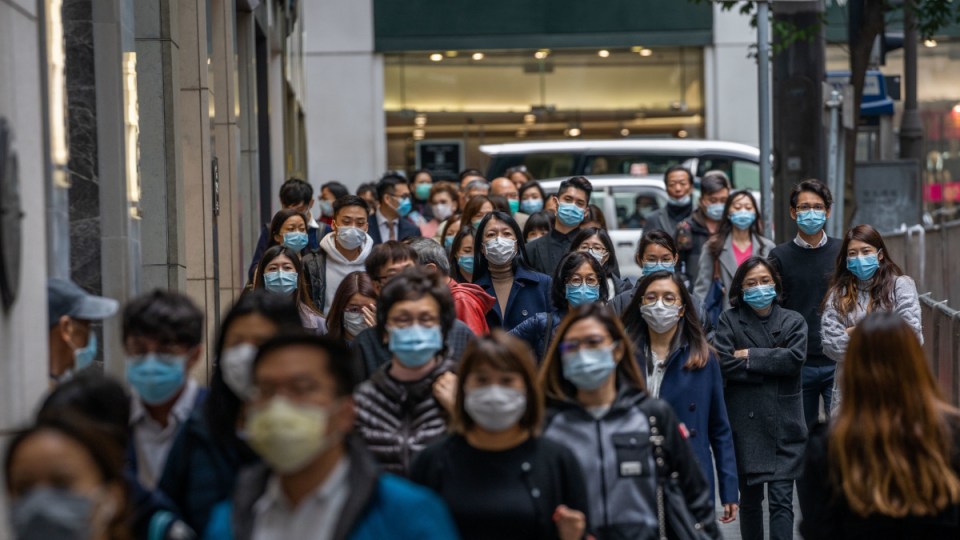 Myths about the coronavirus are spreading quickly. Photo: Getty

Such little money and so few customers are trickling in some Asian businesses that they’re being forced to cut back on staff and shut up shop at peak hours.

It appears many people want to steer clear of areas heavily populated by Chinese people for fear of the coronavirus spreading, they say.

In one case, a Melbourne Uber driver refused to take a passenger because of the man’s Asian appearance.

In a text message exchange, seen by The New Daily, the driver tells the passenger after leaving him on the side of the road:

I don’t need coronavirus.’’
– Uber driver to a Melbourne passenger of Malaysian descent

Other Chinese-Australians have told of being forced to wait in their car instead of being allowed in a GP’s reception area, and of people avoiding them on the street.

They said the spread of misinformation has opened the floodgates for racism and discrimination against people of Asian descent.

That’s not only caused some shops and restaurants to lose out, but, as businessman Lionel Leung puts it, it has “set us back decades” and made racism “more prevalent”.

‘I have to go home, I have no choice’

Diana Choi, a restaurant owner in Melbourne’s second Chinatown, Box Hill, has reported significantly less customers when there would normally be a constant stream of revenue and foot traffic.

“How long will this go on? … I just worry about the lease payment,” Ms Choi said.

During weekdays, between 6pm and 8pm, the restaurant would typically rake in up to $500. That increased to about $700 on weekends, Ms Choi said.

Nowadays, the restaurant closes at 6pm because it isn’t profitable any more to open at night.

And, instead of five workers, they now have just three.

“I want to get the money but when the boss tells me I have to go home, I have no choice,” employee Tina Choi said.

She said they would normally see about 100 customers come through daily, but that’s been cut by at least two-thirds since the coronavirus outbreak.

The fatal respiratory illness has infected more than 24,600 people, 14 of whom are in Australia, and killed 494 people globally.

The manager of a shop in Box Hill, who asked not to be identified, said workers there would usually chat to at least 10 customers every day from Monday to Friday, but that all changed when Melbourne confirmed its first coronavirus case.

He jokingly said: “I don’t see any customers, so I don’t wear (a face mask).”

A text exchange between an Uber driver and a Malaysian client in Melbourne (seen below and supplied to The New Daily) shows the extent of racism facing Asian-Australians since the coronavirus outbreak.

The man messaged his driver on Wednesday, saying he was standing in front of a car wash and had noticed the Uber had driven past him.

The driver then responded: “OK, got it! I don’t need corona virus (sic).” 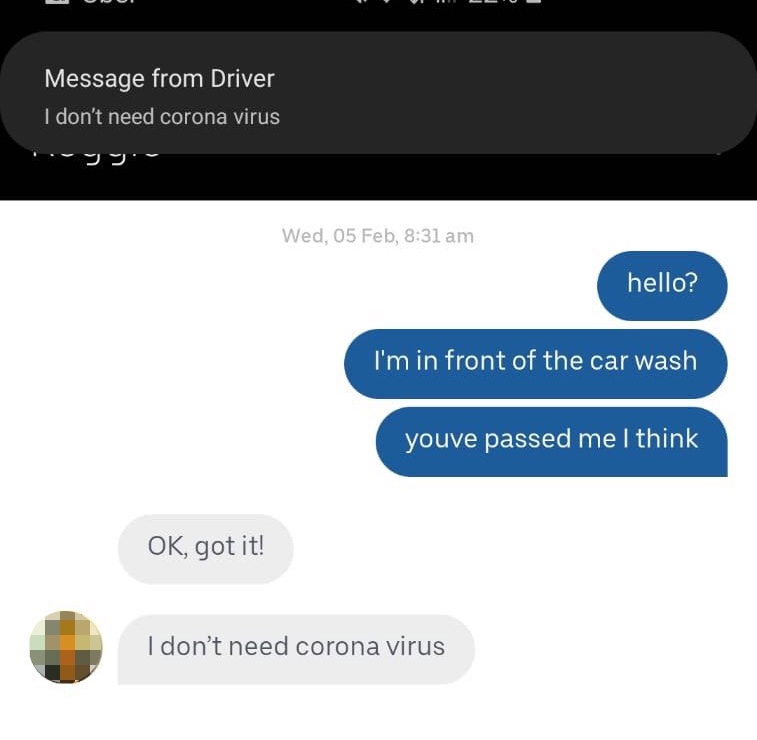 That’s not an isolated case of apparent racism.

As Wai Hoey and his wife were waiting at a stop light, they noticed a man eyeing them before distancing himself.

“He moved a few steps away from us … as if we were live carriers of the coronavirus,” Mr Hoey said, adding that the experience reminded him of “racial segregation almost”.

“I felt my personal right was hurt, that I have every right to occupy my space.”

Not long after, the couple were inside a shopping centre elevator with two elderly ladies.

“They obviously did not want to be in the same lift as us,” Mr Hoey said.

“You don’t know how much racial prejudice I endured in my school yard.

“We need all rational people to help stop the racist virus from spreading and take us back to the racially less tolerant days.”

Lionel Leung said his Chinese friend who recently visited a medical centre to get her blood pressure checked was forced by the receptionist to sit in her car on a 40-degree day while waiting her turn.

“Because she had a mask on and she’s Chinese, the girl at the reception said to her ‘yes, we have your appointment time here. The doctor’s not ready as yet, can you please wait in your car?'” Mr Leung said.

“It was 40 degrees heat and the young receptionist, in due respect, was very, very tight.

“She told my friend to leave the air-conditioning on in the car and they will call her when the doctor’s ready.”

He said the coronavirus has been stigmatised as the “China virus” or “Chinese virus” by some mainstream media outlets.

That has “ignited the racial issues and provoked an enormous amount of hurt amongst Chinese-Australians”, he said.

Coronavirus spreads hate: These are the racist slurs being hurled at Chinese-Australians