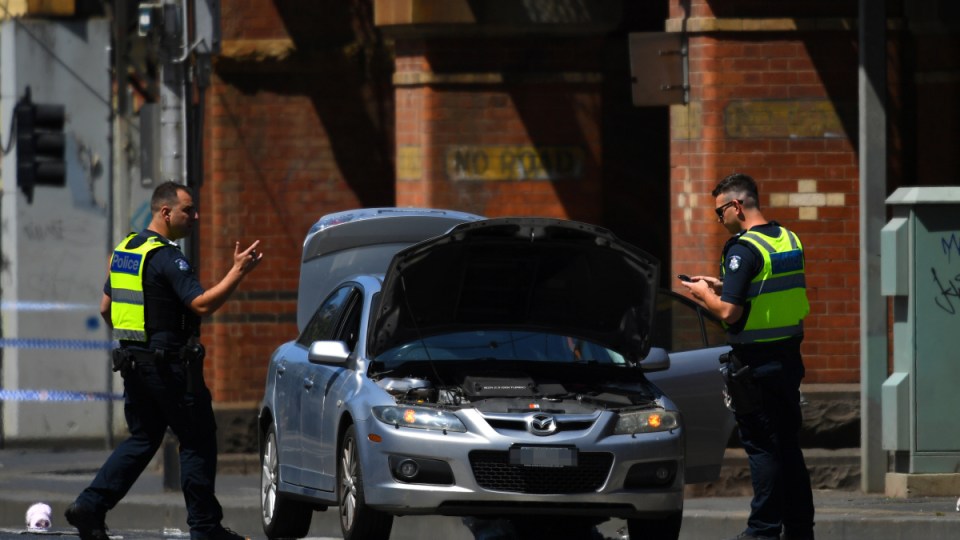 The Flinders and William streets intersection was closed by police. Photo: AAP

A man has been arrested after he was seen driving erratically in Melbourne’s CBD on Wednesday afternoon.

The man had earlier done circles in the busy intersection of Swanston and Flinders street, before climbing on the roof of his car, from where he yelled for police.

“The vehicle has done a circle within the intersection. He’s then stalled the vehicle [before driving it] to the intersection at Flinders and put his hazard lights on,” Victoria Police Superintendent Dan Trimble said later.

Officers closed the intersection of Flinders and Williams streets, and asked people to avoid the area. City trains were halted between Flinders Street and Southern Cross station as the incident unfolded.

An exclusion zone was set up around the incident scene while the man’s car was searched.

No one was injured.

So this just happened @9NewsAUS pic.twitter.com/ywdN7bCONp

Speaking to the media, Superintendent Trimble was asked if police believed the man had a mental health issue.

“Quite possibly,” he said.

When questioned why rail lines were closed, Superintendent Trimble said “there was a backpack in the car when he was arrested and we got the bomb squad unit to clear that and, as a precautionary measure, we made an exclusion zone”.

It is not believed the incident is terror-related.

Superintendent Trimble said the incident was reminiscent of the rampage by James Gargasoulas in 2017, when six people were killed and 27 seriously injured.

“From what we have seen, this was very similar to what happened a few years ago … We are well prepared for those”.

During the incident, one officer was seen running across the intersection, apparently carrying a large weapon. Other officers wore bullet-proof vests.

Metro Trains confirmed all city loop train services had been cancelled until further notice as the incident happened under the rail bridge between Flinders Street and Southern Cross stations.

⚠ Hurstbridge/Mernda lines: Minor Delay due to a @VictoriaPolice request near Southern Cross.

Trains will run direct to Jolimont, not via the City Loop. pic.twitter.com/Eqwn9k4KzR

The Route 75 tram was diverted along La Trobe Street and Spring Street in both directions, and the Route 70 tram between Russell Street and Waterfront City Docklands was stopped.