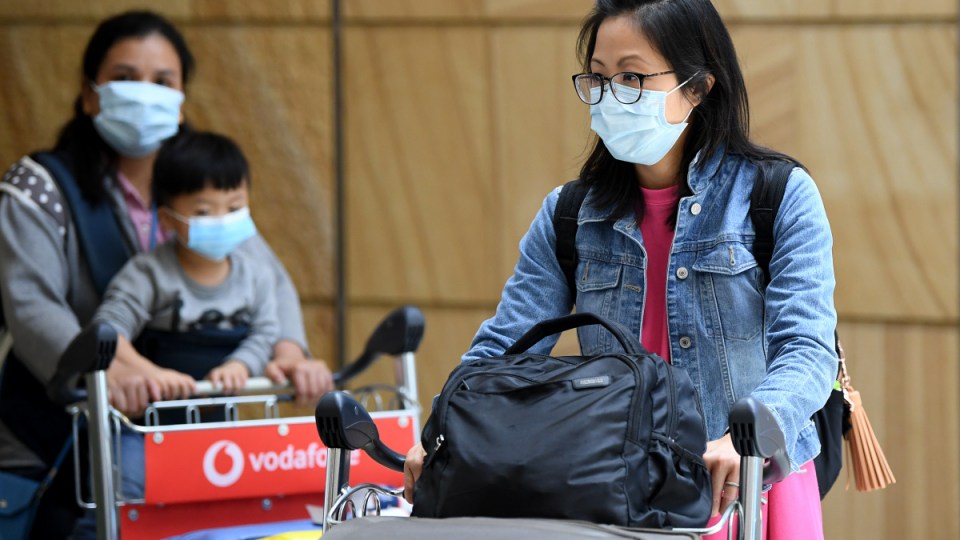 Australia will deny entry to people travelling from or through China. Photo: AAP

Australia has closed its borders to China and Qantas will cancel flights as more countries take extreme measures to stop the spread of the deadly coronavirus.

Prime Minister Scott Morrison announced Australia’s travel advice had been raised to level four – “do not travel” – following the USA also advising its citizens not to visit China.

It comes as the number of infected people neared 12,000, with 259 deaths and as more airlines announced they would stop flying to China.

Two cases of coronavirus in South Australia has brought Australia’s total to 12 after a couple in their 60s from Wuhan, the epicentre of the outbreak, were placed into isolation.

The latest advisory includes denying entry to people travelling from or through China who will not be allowed enter Australia for 14 days from the time they depart or transited through the Asian superpower.

Exceptions will be made for Australian citizens, permanent residents and their immediate family, as well as air crews who have been using appropriate personal protective equipment.

These individuals arriving out of mainland China, not just the Hubei province, are required to self-isolate for a period of 14 days from the time they leave the country.

“In addition to that, there’ll be advanced screening and reception arrangements put into place at the major airports to facilitate identifying and providing this information and ensuring the appropriate precautions are being put in place,” Mr Morrison said.

The measure is effective from Saturday and will be reviewed in a fortnight.

Other countries to have imposed travel restrictions include Russia, Japan, Pakistan and Italy.

Qantas announced on Saturday it would suspend flights to mainland China from February 9, joining 36 other international airlines that have cancelled services.

“Qantas will suspend its two direct services to mainland China (Sydney-Beijing and Sydney-Shanghai) from 9 February until 29 March 2020,” it said in a statement.

“This follows entry restrictions imposed by countries including Singapore and the United States, which impact the movement of crew who work across the Qantas International network.

“There is no change to Qantas services to Hong Kong as it’s exempt from current travel restrictions.”

Customers with bookings between February 9 and March 29 will be contacted by the airline to discuss options.

“We welcome the move by Qantas to suspend direct flights into China, though we note it is for logistical reason rather safety reasons,” TWU secretary Michael Kaine said in a statement.

“This issue is getting more serious by the hour and it requires a calm but definite response. The Federal Government must act immediately and end flights from China,” Mr Kaine said.

Queensland Premier Annastacia Palaszczuk said on Saturday it was important to halt flights to contain the spread of the virus which had arrived in Queensland via Chinese tourists.

“I don’t often agree with Donald Trump, but I do agree with the US authorities on this occasion that I think we should take every measure possible to combat this virus,” she said.

“There is still further data we would like from the Federal Government, and that is where there have been travellers coming from China to Queensland — not families from the Chinese community that are at home, but there may be some travellers independently travelling around Queensland.

“We would like to know where they are so we can actually make sure they are getting the messages and they are self-isolating.

Ms Palaszczuk told the community not to be afraid as health officials worked to contain the spread of the virus.

“It is very important that people do not discriminate against our Chinese community,” she said.

“They are so involved, they contribute so much to our community, and all of the communities are absolutely doing the right thing, especially families returning from China.

“So, please, everybody do the right thing and show respect and treat everybody equally and go about your normal business.”

Foreign Minister Marise Payne’s office said planning for the evacuation of Australians from the epicentre of the coronavirus was ongoing.

Australians in Wuhan who have applied for a flight to Christmas Island are waiting to see if they will be able to leave.

Chinese officials are yet to approve the federal government’s plans to evacuate Australians and quarantine them offshore.