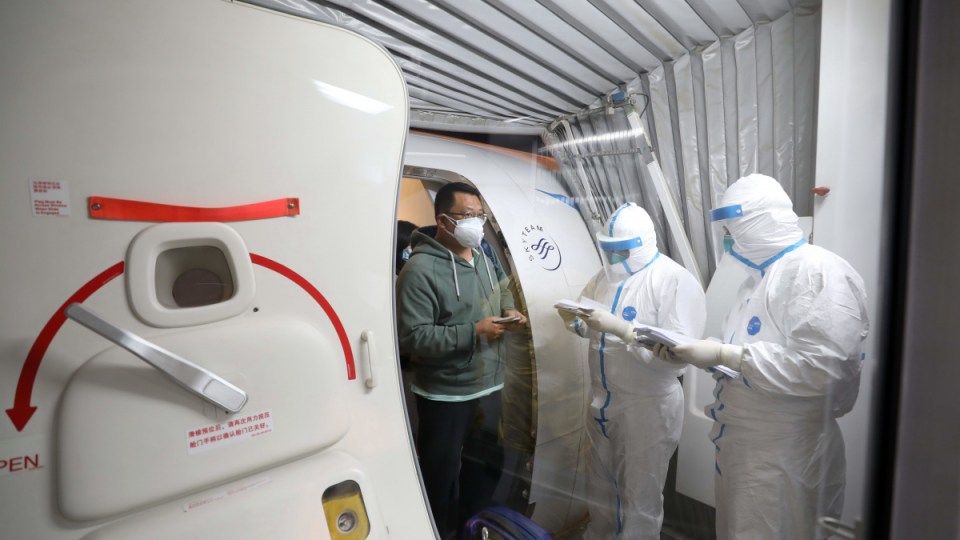 Travel to and from China is under the microscope as the coronavirus sweeps the world. Photo: AAP

China has slammed the US for its “truly mean” travel warning not to visit the Asian nation as the country endured its deadliest day of the coronavirus outbreak.

The reaction comes as a new case of the virus is confirmed in Melbourne, bringing the total of cases in Australia to ten.

A woman aged in her 20s became ill two days after returning from Chinese city of Wuhan, the epicentre of the outbreak, last Saturday.

She was not infectious on her flight back to Victoria and is recovering at home in isolation, as authorities wait for 13 other test results for the respiratory illness.

Meanwhile, America is urging its citizens to avoid China, raising the travel advisory to the same level as Iraq and Afghanistan.

“Do not travel to China due to novel coronavirus first identified in Wuhan,” the US State Department warns.

It follows the World Health Organisation declaring a global emergency on Friday but stating that travel and trade restrictions were not necessary.

International infections have hit 9800 as countries including the UK, Russia, Sweden and Italy confirmed their first cases of the respiratory virus.

As countries considered their responses, China’s foreign ministry spokesman Hua Chunying reacted angrily to American comments including that the outbreak could help bring back jobs to the US.

“Many countries have expressed support and offered help in various forms to China. In contrast, remarks and actions from the US are neither factual nor appropriate,” Mr Chunying said in a statement.

“The World Health Organisation urged countries to avoid travel restrictions, but very soon after that, the United States did the opposite.

China has full confidence and capability to win the fight against the novel #coronavirus epidemic, Hua Chunying made the remarks after the World Health Organization said the novel coronavirus outbreak has become a Public Health Emergency of International Concern. pic.twitter.com/vtrRluxaAn

Meanwhile repatriations of foreigners stuck in Wuhan, the virus epicentre, have begun in earnest with countries including Italy, France, Germany, South Korea, Canada and India retrieving their citizens.

A Qantas passenger plane is poised to evacuate up to 600 Australians trapped in Wuhan which remains in lockdown.

The Australian government is still waiting for China to approve its controversial plan to evacuate and quarantine citizens on Christmas Island.

The Morrison government is banking on China issuing an approval over the weekend, meaning stranded Australians could leave Wuhan early Monday morning.

Evacuees will be flown back to Australia first before being taken to Christmas Island in smaller aircraft.

Medical specialists will meanwhile spend the weekend preparing quarantine facilities for the arrival of evacuees. Experts from Australia’s disaster response team were dispatched to the island on Friday.

One of the Australians in Wuhan who has applied for evacuation is real estate agent Daniel Ou Yang, 21.

Mr Yang had planned to stay in the locked-down city but doesn’t want to put his life on hold as the global health crisis unfolds.

He initially feared he might be treated like a detainee on Christmas Island, where evacuees would be quarantined for 14 days before being cleared to return home.

“I would be putting my whole life on pause for possibly half the year,” he said.

“A lot of things would have to be put on hold if I don’t get on this flight.”

Mr Yang said he was not fazed by the $1000 price tag for the evacuation to Christmas Island but could see how the most vulnerable may struggle to pay the fee.

“It is not a great feeling to be not going to (the mainland) and having to pay when it is out of your control,” Mr Yang told AAP.

Home Affairs Minister Peter Dutton has been forced to defend plans to make Australians pay some of the costs of the evacuation.

He said costs had been applied to evacuees in the past, noting that not all the 600 or so Australians who had registered for the airlift would be evacuated.

The World Health Organisation has declared the coronavirus outbreak a global health emergency but says containment is still possible.

The declaration means there will be a greater focus on a global response, with WHO fearful of what could happen if the virus reaches countries ill-prepared to cope with high infection rates.

“Australia has been acting in advance of this decision,” Prime Minister Scott Morrison said.