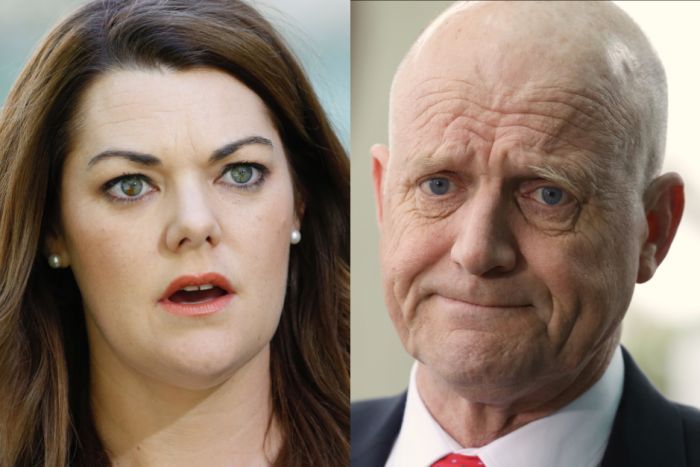 Former senator David Leyonhjelm has not been issued with a court-order preventing him from repeating defamatory remarks about Greens Senator Sarah Hanson-Young, but he will have to pay her legal costs.

He then awarded costs in her favour, bringing the saga to an end.

He questioned why “solicitors acting with the respect and civility … would have chosen to express themselves in such a way”.

“It is one thing for Mr Leyonhjelm to make the belittling statements concerning Senator Hanson-Young … it is another for his solicitors, bound by the professional conduct rules, to engage in conduct of that character,” he said.

But he said it had no bearing on his decision to award legal costs to Senator Hanson-Young.

Last November, Justice White found Mr Leyonhjelm defamed Senator Hanson-Young over comments he made suggesting she was a misandrist and a hypocrite.

Senator Hanson-Young was awarded $120,000 in compensation, which she pledged would go to charity.

On today’s court win:
“I hope my experience and the court’s decision shows young women they have a right to be treated with respect, without intimidation and abuse.

The proposed injunction order was too broad

At a December hearing, Justice White awarded her a further $5000 in interest but reserved his decision about legal costs and a proposed injunction order that would stop Mr Leyonhjelm from making similar remarks in the future.

In his judgment on Friday, Justice White said the proposed injunction order was broad.

“The restraints sought by Senator Hanson-Young were without limit and, if imposed, would have precluded Mr Leyonhjelm from making even the non-defamatory statements,” he said.

He said Mr Leyonhjelm “failed unreasonably” to agree to a settlement offer proposed by Senator Hanson-Young.

The court previously heard that at the conclusion of a Senate vote in June 2018, Mr Leyonhjelm told Senator Hanson-Young that she should “stop shagging men”.

In a media statement, Mr Leyonhjelm claimed he had made the comment in response to an interjection by Senator Hanson-Young along the lines of “all men are rapists”.

However, Justice White found Senator Hanson-Young did not speak those words.

The court has previously heard that Mr Leyonhjelm – who quit the Senate in February 2019 – used his settlement offer to Senator Hanson-Young to further insult her.

Kieran Smark SC, for Senator Hanson-Young, told the court that Mr Leyonhjelm’s offer was “an offer of nothing”.

He described parts of the offer as “gratuitous, insulting and offensive”.

“In the last sentence, he can be seen to take the opportunity … to insult [the senator],” he said.

“Those two words mean a tip or a gratuity so that seems to be offensive, so in other words, ‘I’ll give you a tip’ as one might give a taxi driver’.

In his submission opposing the injunction order, Leon Bertrand, for Mr Leyonhjelm, said his client was no longer a practising politician.

“His position now is more akin to an ordinary member of the public. The impact of his words would not be too substantial,” he said.