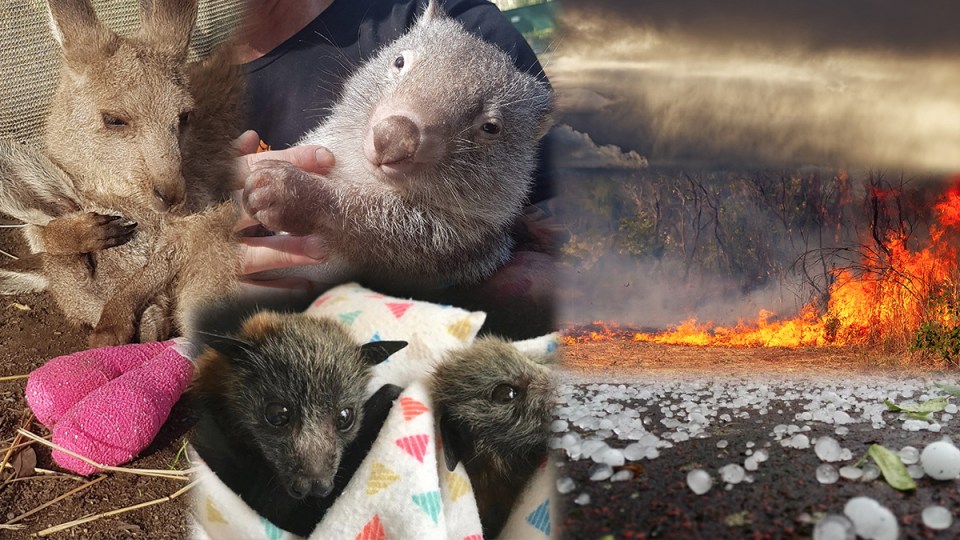 Wild and violent weather has left animals hurting all over the nation. Photo: TND

Cameras that can detect heat and movement are tracking down burnt or hiding animals, as rescuers take to the skies to save wildlife suffering on bushfire-razed land.

Devastating images of wounded and charred animals have touched hearts around the world – so much so that teams of international wildlife experts have touched down over the past fortnight to join a massive rescue operation.

Using drones equipped with thermal imaging technology, crews are flying over scorched land and using cameras to scout for signs of life in areas that were once thriving bush habitats.

More than one billion animals are believed to have died in Australia’s devastating bushfires, with more than 800 million estimated to have been killed in NSW alone.

Fire has not been the only threat.

Wild weather hit eastern states and brought with it a new threat: Hail so powerful it knocked out birds and bats.

The knowledge that many animals are still out there in razed bushland, injured and thirsty, has compelled people to travel far and wide to help.

Wildlife carers from International Fund for Animal Welfare (IFAW), New Zealand’s Helping You Help Animals (HUHANZ) and Vets Beyond Borders (VBB), as well as teams from Germany, Canada, France and South America, have rushed over to offer assistance.

Sonja Elwood, founder of volunteer-run Sydney Wildlife rescue group, has been co-ordinating the animal emergency response in parts of NSW.

Speaking to The New Daily from a kangaroo sanctuary at Wandandian on NSW’s east coast, Ms Elwood said international veterinarians, vet nurses and wildlife carers have been working “around the clock” to find and treat injured animals before it was too late.

“Everyone recognises the real emergency is just this window of time we have to get out there and find what animals are injured and get them some help,” Ms Elwood said.

“There’s only so long animals can survive out there with these types of injuries. We figure in these burnt zones, we only have a three-week opportunity to find them.”

To speed up the process, Ms Elwood said the Germans and Canadians brought over drones and used thermal imaging to locate the animals from the air.

So far, the wildlife rescue teams have found mostly kangaroos, joeys and wallabies – animals that can sense danger and travel quickly.

“Those that have survived have run through a fire or through burnt ground, so they come with burnt feet, burnt paws, burnt tails and some injuries that have occurred along the way, like ripped pouches,” Ms Elwood said.

Locals have brought in goannas, snakes, possums and koalas to the sanctuary, too.

Carolyn Press-McKenzie, founder of HUHANZ in New Zealand, flew over with a group of vet nurses, builders and a veterinarian.

They are camping with the other wildlife teams including Vets Beyond Borders at Wandandian.

“We work from six in the morning until midnight every day,” Ms Press-McKenzie told The New Daily.

“We’ve got firies, locals, everybody bringing these animals through – you just sit down for dinner in your camp chair and then another animal will arrive.”

Ms Press-McKenzie said one of the hardest parts was being forced to euthanise an animal that a local had saved.

“You’re dealing with families, many who’ve lost their homes, who bring in an animal they’ve rescued and we have to put it to sleep,” she said.

“That can be the final straw for some people. It’s a very, very emotional and hard time.

“There is a lot of sadness and death, and a lot of good news stories as well. We’ve got a lot of babies bandaged up and all bottle fed.”

While NSW has been hardest hit so far, Australia’s bushfire crisis has affected animals all over the country.

Dr Alistair Legione, a veterinary microbiologist at the University of Melbourne, said he was particularly worried about the future of koalas living on French Island and Kangaroo Island after the recent bushfires.

“The koala populations on French Island and Kangaroo Island are important to maintain because they are free of chlamydia,” Dr Legione told The New Daily.

Chlamydia is a sexually transmitted disease that can cause blindness and infertility in koalas. It is a huge health issue for the animals all over the country. In Victoria, one in four koalas has chlamydia.

“It’s pretty worrying from that perspective.”

As residents breathed a sigh of relief amid a cool change across Australia’s eastern seaboard, animals faced a different threat amid flash floods and dust storms muddying fresh waterways.

In Canberra – where just weeks ago locals were wearing face masks to cope with bushfire smoke pollution – a violent storm last week not only caused windows to smash but also killed or injured hundreds of bats.

It’s believed large hailstones knocked them out of trees.

320 nectar bats met their end in Commonwealth Park today. Hit by huge hailstones never seen in Canberra before. Fractures and wing damage a big issue; many needed euthanasia. Can we talk about Climate change now @ScottMorrisonMP ? We need these bats to pollinate our forests. pic.twitter.com/nmpi9Ebk4O

By Thursday, parts of Canberra were on fire, office workers were evacuated and the airport was forced to close.

On Wednesday night, a bizarre dust storm combined with heavy rain swept through Melbourne, covering cars in red sludge and coating outside tennis courts at the Australian Open in sediment.