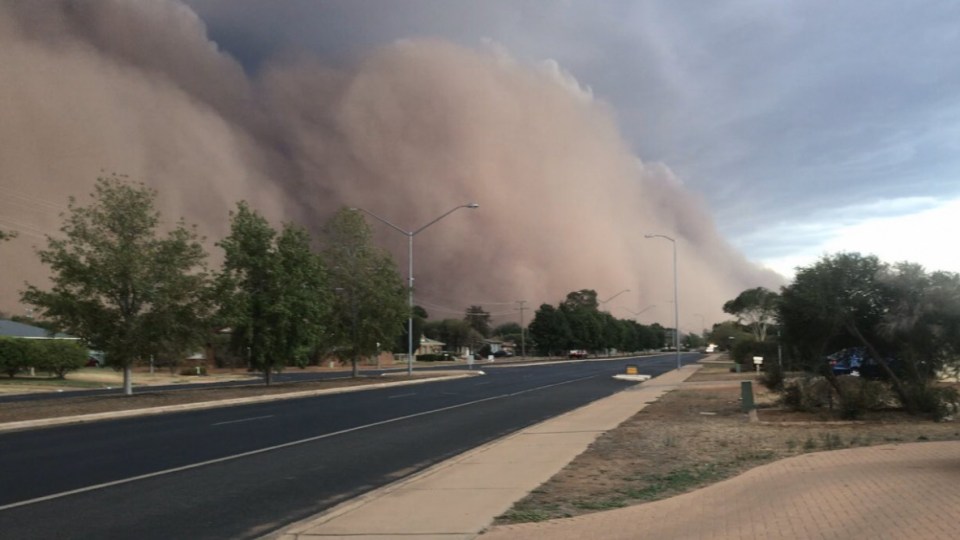 Social media has been flooded with apocalyptic scenes showing how an enormous dust storm turned day into night in a matter of minutes as it swept through regional New South Wales.

All while the east coast’s deadly bushfires rage on and another man confirmed dead after suffering burns in the NSW blazes.

Enormous brown clouds smothered Dubbo and nearby towns just after 8pm Sunday, the dust so thick it blocked out the sun and triggered abrupt thunderstorms.

Severe thunderstorms and damaging wind gusts were also rolling through Queensland at the weekend, creating weather so extreme that Bureau of Meteorology forecaster Dean Narramore said it was a “one-in-100-year event”.

“Those rainfall rates would only be observed at that location every 100 years or so on average,” he told The New Daily.

The wild weather is not over yet. Heavy rain bucketing down in Victoria has been welcomed in fire-razed communities – but it could present a fresh problem amid the threat of flash flooding.

If Sunday was anything to go by, powerful wind gusts, rain, thunder and hail could be part of the mix across all eastern states.

8 hours of rain on the #GoldCoast and we people in boats on the streets of Southport. 🚣‍♂️ ☔️ pic.twitter.com/2GWL4mdb2K

Authorities have confirmed the death toll from NSW bushfires now stands at 21 following the death of an 84-year-old man who was burnt in the Bega Valley town of Cobargo on New Year’s Eve. He died in hospital at the weekend.

There were 69 fires still burning on Monday morning, with 20 still out of control, despite welcome rain falling overnight.

Up to 180 millimeters of rain drenched many towns on the Mid North Coast and the northern rivers region on Sunday night.

The Bureau of Meteorology issued a series of severe thunderstorm warnings on Sunday evening for inland NSW with the associated winds generating massive dust clouds.

“That dust has now eased. There’s still some dust haze around the place,” Mr Narramore said.

Widespread thunderstorms are also expected across many parts of the state, particularly in central and southeastern NSW, he said. Residents there can expect severe storms and destructive winds, giant hail and also very heavy rainfall.

In the southern part of the state, high winds saw storms race overhead quickly, resulting in lower measured falls. The thunderstorms will continue on Monday.

Looks like the dog is about to get blown off the chain. Dust storm rolling into Central NSW. #AirQuality #duststorm #Australiabushfire pic.twitter.com/vSzTkqdnyu

Thunderstorms are likely as well as hail. But the cool relief won’t last all week.

Winds will shift and come more from the north and west mid-week, bringing drier and warmer air on Wednesday and Thursday.

“That means on both of those days we may end up seeing fire dangers increasing again and causing more problems for our fire agencies,” Ms Barr said.

Moisture is expected to return by Friday and the weekend.

“We’re going to see some potentially flash flooding and severe thunderstorms over the next couple of days, including some damaged fire areas,” Emergency Services Minister Lisa Neville said.

She also told reporters up to 70 people were expected to fly back into the small town of Mallacoota, where bushfires trapped thousands on the beach.

“We’re hoping tomorrow … 300 people want to fly back in and that’ll be our first priority and we’re looking at around 70 people to fly back in tomorrow,” Ms Neville said.

#Australia wins as place with most extreme weather I've ever lived. Last week trying to keep my eyes and lungs from burning with smoke. Today, #hail larger than anything I've ever seen. Magpies with broken wings 😢. Houses & cars with broken windows, flooding etc #melbweather ☄️ pic.twitter.com/zNQFMWMp8q

She said people who were reuniting with family members that stayed in the stranded East Gippsland coastal town were the priority.

The government is also hoping to clear roads to the isolated community so people could access properties and vehicles abandoned due to the fires.

The weather bureau confirmed the state was about to be hit by downpours but the rainfall would be “hit and miss” and unlikely to put out blazes.

“Victoria is about to see its wettest two-day period in many, many months,” forecaster Mr Narramore said on Sunday.

Since 9pm on Sunday, many central and eastern parts of the state experienced 10 to 25 millimetres of rain, with a number of locations getting up around 50 millimetres, he told The New Daily on Monday.

Up to 56 millimetres of rain fell in Mount Elizabeth and Mount Wellington. They had the highest falls in Victoria, Mr Narramore said.

On Monday, residents in central and east Victoria can expect anywhere between 10 and 30 millimetres of rain.

A number of other regions may experience “20 to 50 millimetres and some locations could see up to 100 millimetres today with any heavy thunderstorms or bands of rain”, Mr Narramore said.

Queensland’s south coast is bracing for more rainfall and thunderstorms after major highways were cut off for six hours on Sunday, and theme parks closed due to floodwaters.

Up to 300 millimeters of torrential rain was recorded in the state overnight, causing “dangerous and life-threatening” flash flooding on major roads.

Police received more than 50 reports of flooded roads while the SES responded to more than 100 call-outs on the Gold Coast alone, with another 60 between Brisbane and the Sunshine Coast.

❌IF IT’S FLOODED, FORGET IT❌

The @BOM_Qld has reported flash flooding in some parts of the state this morning due to heavy rainfall overnight.

Fast-moving water can be extremely unpredictable and have devastating consequences. pic.twitter.com/dqqhXWOj9P

This is movieworld and the exit to Dreamworld 😞😞 FIRES AND FLOODS WOW
The fact that my job is only closed 2 times a year for ANZAC and Christmas, it takes a lot for themeparks to close down for the day pic.twitter.com/Gsp6Jjbwjg

Conditions are expected to slightly ease in the coming days, but “we’re still expecting widespread showers and thunderstorms to continue through many parts of central and southeastern Queensland”, Mr Narramore said.

Residents can expect between 20 and 40 millimetres of rain and possibly heavier falls until Tuesday before “easing up just a little bit in the southeast and with the weather contracting further north”, he said.

As of Monday, communities from greater Hobart to Wynyard on the northwest coast will be forced to abide by new water restrictions which are expected to remain in place until April.

“Although these sorts of measures are a regular occurrence in other parts of Australia, this is the first time such widespread restrictions have been necessary for Tasmania,” TasWater’s Ruth Dowty said in a statement.

The move follows three years of dry conditions and low rainfall, along with advice from the Bureau of Meteorology indicating the conditions are likely to persist through the cooler months.

“By implementing restrictions now, we can build up our storage and prepare greater safeguards against the possibility of dry conditions into next summer,” Ms Dowty said.

“We may experience some rainfall in the meantime, but the BOM advice is that it will take several months of above-average rain to make up the deficits in our waterways and reservoirs.”

Hobart will remain on stage one restrictions. Joining the state capital on stage one water restrictions will be Launceston, Wynyard, Somerset, Burnie, Flinders Island and a number of other communities.

Under the restrictions, hosing concrete or paved surfaces is banned apart from for construction purposes or for health and safety reasons.

Automatic and manual-system garden watering is also restricted.
Stage two water restrictions will go into effect in a number of other communities.