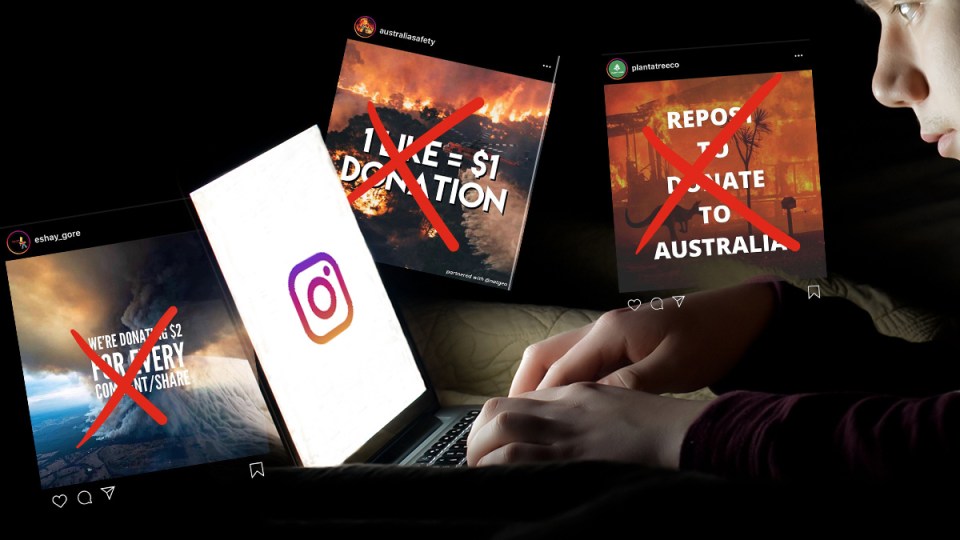 Nico has made it his mission to uncover fake fundraising campaigns on Instagram. Photo: TND

Far from the smoke on the other side of the world, an American teenager is working hard to expose Australian bushfire fundraiser scams.

Nico, 15, lives in the US state of California.

When he’s not at school or spending time with friends, he runs an Instagram account called @exposinginstascams, which he uses to investigate fraudulent online campaigns.

Since creating the account in May last year, Nico, whose surname The New Daily has chosen to withhold, has uncovered dozens of opportunistic scammers pretending to donate money to charity or do a good deed in exchange for ‘likes’ or shares.

He said he was shocked by how easily some people were fooled by fake accounts.

“One day, I was browsing some Instagram stories and saw that (a fraudulent) post had overtaken the stories of nearly every one of my friends,” he told The New Daily.

“I looked at it and was baffled at how obviously fake this was with all of the evidence and contradicting information.

“It had too many people giving attention to this liar and I had to do something about it.”

Nico’s list of victims includes people who have lied about cleaning up rubbish in the ocean or pretended to donate money to poverty-stricken people in Sudan.

More recently, he has turned his attention to Australia’s catastrophic bushfires.

The very FACT that people think it’s OKAY to SCAM people based on an ACTUAL CRISES, is actually DISGUSTING! Oh no, they’re doing it again. @plantatreeco is fake! There are many reasons to this. First of all, they’ve scammed the entirety of instagram before. Scroll down in my feed and you’ll see. Second of all they are already advertising “Free Necklaces” on their story. Next, they have no email and their website only sells merchandise. Next, they’re following nearly 2000 people! They aren’t verified and provide absolutely no proof whatsoever that they can fund this. They even blocked me because they’re afraid I’ll expose them! Make sure to share this to your story ASAP and stop them from gaining attention to grow their account and PROFIT off of your attention. SPREAD AWARENESS BY SHARING THIS POST! (edit – my second post ever exposed them for a different scam) (edit 2 – We need more people to see this, tag people in the comments who have to see this evidence!)

For the scammers behind these fake Instagram accounts, their aim isn’t to trick people into sending them money directly.

Instead, their plan is grow an account so popular that it attracts long-term endorsement deals and sponsorships.

Nico said he was worried about the bushfires raging across the nation.

“The Australian bushfires are really showcasing the power of climate change and there needs to be changes to people’s attitudes for climate change quickly,” he said.

So far, the bushfires have claimed 28 lives, wiped out an estimated billion animals, destroyed more than 2000 homes and burnt through more than ten million hectares of land.

Shocking images of burnt koalas and gutted properties have prompted people from all over the world to dig deep and donate to Australian bushfire appeals and firefighting services.

Corporate donors have so far donated more than $180 million, and comedian Celeste Barber’s fundraiser has raised more than $51 million.

But unfortunately, scammers have also been using the deadly disaster to make an easy buck.

Some have even stooped as low as creating fake fundraisers in the names of people who have died in the bushfires.

Since September, the Australian Competition and Consumer Commission (ACCC) has received 425 reports of bushfire scams to its Scamwatch hotline.

This included 198 online reports and 184 phone calls since a bushfire scams hotline was launched last week.

Of those, 45 reports related to bushfire scams on Instagram between January 1 to 16.

“The types of scams involving donations for likes/shares/reposts don’t tend to result in financial losses to the ‘victim’, but the gain is a wider audience for the business or scammer,” an ACCC spokesperson told The New Daily.

“We strongly encourage people to only send funds where there is a guarantee they will reach the right place.”

Always make sure you are donating to the organisation you intend by looking them up yourself. pic.twitter.com/CeGUOF33WI

“If you are uncertain about the credibility of charity collectors, obtain their details and contact your local police,” a NSW police spokesperson told The New Daily.

“If you think you have paid money to a scammer, please contact your bank and local police immediately, and report it to Scamwatch.”

“Not only do these scams cost people money but they divert much needed donations away from legitimate charities and causes,” Mr Jenkin said.

A list of registered bushfire charities can be found here.