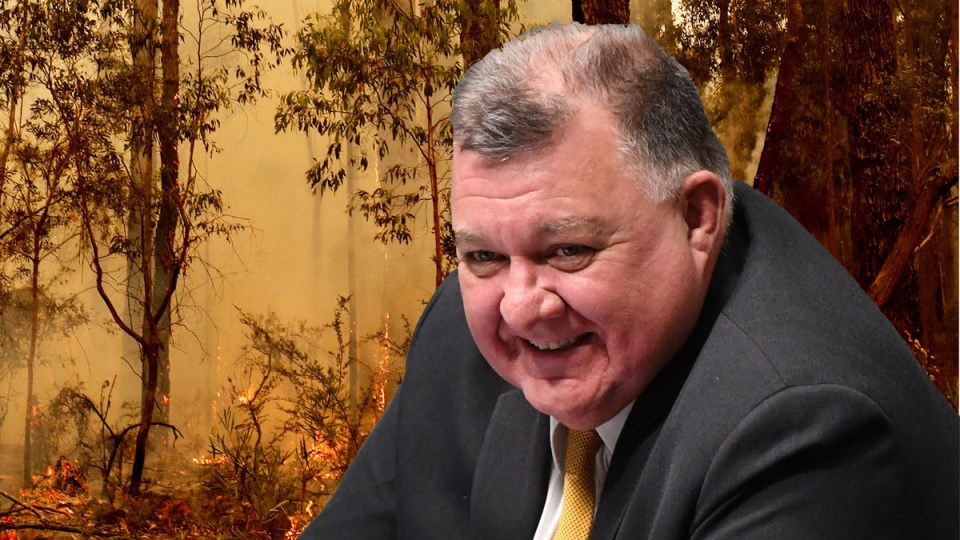 This week’s widespread reporting of a Liberal MP’s car crash interview exposed a little-known truth to voters that Scott Morrison has been working hard to keep hidden.

Usually only the viewers of the programs broadcast by Sky News after dark, which number at around 20k to 60k each night for any one program, are exposed to the unhinged muttering of the climate denialists who still exist on the fringes of Australian society and in the ranks of the Morrison Government.

These are the hardline conservatives and reactionaries who continue to resist what the rest of us know to be true – that climate change is real and that a decade of denying this has led to the nation being perilously underprepared for the extended bushfire season that is now causing havoc around the country.

Some of these climate obstructionists are media moguls, cashed up Liberal Party donors and tabloid broadcasters. But the ones that the PM has been trying to hide are those within his party, like Craig Kelly, who helped to destroy Malcolm Turnbull because of his attempts to beef up the Government’s minimalist response to climate change – the same MPs now pressuring Mr Morrison behind the scenes to avoid any similarly ‘career-limiting’ change to the Government’s climate policies.

It wouldn’t be a surprise if some have even threatened to quit the Coalition and move to the crossbench, thus reducing the government’s slim margin in the parliament, which Mr Kelly has threatened to do in the past.

The PM doesn’t want voters to know that his hands have been tied by the troglodytes in his party. But every time he fronts the media and personifies the dog-in-a-burning-building meme, saying “everything’s fine”, he’s admitting he can’t risk doing anything more.

But what about the others in the Coalition? Aren’t a bunch of them the so-called moderates who abandoned fellow moderate Julie Bishop and voted for Scott Morrison to ensure the conservative Peter Dutton did not become PM? Why aren’t they similarly extorting the PM?

The first answer is they probably still have some principles. But secondly, they have too much to lose. This is the age-old problem with politics – most politicians are filled with good intentions until they are elected, then they become focused on staying elected. And if they get promoted, on keeping their ministerial positions.

That’s when good intentions take second place to political expediency. This is why the moderates of the Morrison Government have remained silent in response to the bushfires.

Only once before have they stood up against the forces of intransigence in their own parties, and that was during the marriage equality debate. Bolstered by the surge in support for gay marriage within the Australian community, moderate Coalition MPs put the national interest before their own and spoke out on the need for change.

The time has come for them to do the same on climate action.

By my count, there are 10 Liberals and at least one Nationals MP who could be persuaded to speak out on the need for climate action – either because the majority of their electorates believe the same, or because they have little to lose.

First are the Liberal MPs who only managed to scrape in at the last election, often because climate action was an issue in their electorates. If enough people in these electorates said they would switch their vote to the Liberals were the MP to publicly campaign for the Government to do more on climate action, this might be enough to convince the MP to do so.

The alternative will likely be that the marginal seat holders are swept out of office by the wave of anger against the Government that is currently growing.

Then there are the MPs who’ve been around for a long time and are perhaps planning to retire at the next election. With nothing to lose by speaking out, they are the perfect potential figureheads for a Liberal backbench uprising on climate action.

The MPs most likely to fall into this category are:

Other Liberal MPs with less to lose than the marginal seat holders are those in seats with more healthy margins.These MPs can afford to lose votes from any rump of climate deniers in their electorates, and would likely gain votes by speaking out on climate action. They are:

Despite the electorates of Nationals MPs being heavily hit by the fires, there is only one backbencher from the junior Coalition party who shows the potential to join a backbench rebellion on climate action.

This is Kevin Hogan, the member for safe seat of Page (NSW), who left the Coalition and moved to the crossbench in response to leadership coup against Malcolm Turnbull. Mr Hogan has since rejoined the Nationals, but at least we know he follows through on any such threat.

Some of these names might be familiar, given a few of them also campaigned publicly on same sex marriage. That’s because most of these Coalition MPs are backbenchers, which gives them the flexibility to ‘speak freely’ on alternatives to government policy.

Matters are a bit more complex for the two assistant ministers in this list, who might need to resign from the ministry in order to speak out. That would certainly be a move that would concentrate the mind of the Prime Minister, as would any suggestion that a moderate Coalition MP might move to the crossbench.

Coalition moderates are not dead, they are just resting. However it is time for voters, particularly those in the above electorates, to rouse the MPs with a chorus of support for climate action.