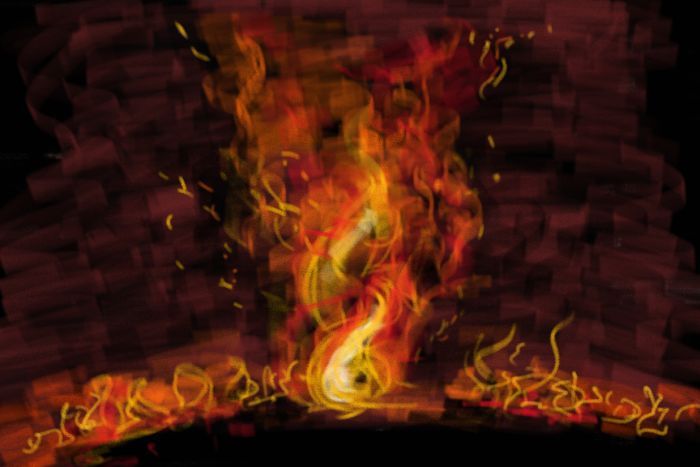 Fire-whirls are just the beginning when it comes to rotation in fire. Photo: ABC Weather

Yes, fires can spin. Because having flames, embers and lightning isn’t enough, fires can also generate tornadoes and supercell thunderstorms.

A volunteer firefighter died on Monday when an event “which could only be described as a tornado” picked up and rolled the truck carrying him and two other crew members.

With so few examples, the science behind these rotating fire systems is still being worked out, but there is no denying they are incredibly dangerous.

“We know fire-whirls exist, they can be up to a few hundred metres high,” said Nick McCarthy, who studies the interaction of bushfires and thunderstorms at the University of Queensland.

“But they don’t cause quite the same amount of concern as when the whole fire plume, and potentially thunderstorm, start to rotate.”

Many Australians will be familiar with supercell thunderstorms; the technical term is mesocyclonic (medium-scale rotating storms).

Basically, they are the really big thunderstorms that do huge amounts of damage.

“The worst thunderstorms that happen are the ones that spin,” Mr McCarthy said.

“What happens with a spinning thunderstorm is that the updraft and downdraft can get set up in just the right way where they can survive for really long periods of time.

“In terms of a system, if you think about it like an engine, a thunderstorm is much more efficient when it spins.”

It’s the same reason that spinning a bottle will allow liquid to leave it more quickly — rotation is the most efficient way of transferring heat and energy.

So when a bushfire thunderstorm or pyro-cumulonimbus cloud starts to spin above a fire, the effects are predictably horrific.

“That causes a really, really rapid feedback mechanism for the combustion reaction and there’s suddenly a whole bunch more fuel that the fire can access because of that spinning motion and can lead to some really destructive impacts,” Mr McCarthy said.

The whole storm might be rotating but that doesn’t mean there’s one vortex.

You can get a supercell bushfire thunderstorm, fire-generated tornadoes and fire-whirls all at the same time (cyclones can also generate tornadoes, but that is a whole other story).

Neil Lareau from the University of Nevada, Reno said tornado-strength vortices could form even when there was no bushfire thunderstorm.

But the naming around this is all a bit controversial because a tornado without fire is only called a tornado if it is connected to a thunderstorm.

“In some respects, these vortices connected to the [pyro-cumulonimbus] are what some scientists consider true fire tornadoes, though at some point on the fireground it doesn’t really matter …. the impacts are what matter,” Dr Lareau said.

When bushfire thunderstorms did form, they added to the dynamics of the system and appeared to be linked to some of the most intense known cases of fire-generated tornadoes, he added.

The data isn’t in yet to empirically say whether Monday’s bushfire thunderstorms were rotating, but the anecdotal evidence suggests at least fire-generated tornadoes were present.

What kind of impacts?

Picture a tornado or a supercell thunderstorm and then add fire — windows being smashed, roofs getting torn off, trucks being flipped, plus erratic fast-moving fire.

“The ability to defend a house by members of the public or a fire agency is extremely limited, and often really quite dangerous even for the fire agency, if those destructive winds start to occur,” Mr McCarthy said.

“Now add on top of that the component of fire, which means that those erratic winds which we talked about at the start, can start to become a little more organised and makes management extremely difficult.”

When whole firestorms start to spin

Mr McCarthy said two major examples of rotating bushfire thunderstorms were recorded at Canberra in 2003 and California in 2018.

During the infamous Canberra fires, footage was taken of a firenado as well as trees being blown down in line with the rotating winds.

“Similarly, the Carr fire, which occurred in Redding, California, was another example of a rotating bushfire thunderstorm that was able to push much, much further into essentially suburbs than a normal bushfire would have allowed,” he said.

Dr Lareau conducted a study probing the origins of the fire-generated vortex that formed that day.

“So that might be a little bit of the geometry of the fire that pushes it to rotate one way or it could actually be the rotation of the winds through the atmosphere,” he said.

“We’re still trying to understand how that applies to these bushfires, but essentially a mix of these ingredients we know can cause some of these fires.

“But what we do know is that when they do form the impacts can be really quite dramatic.”

How do you predict when these storms will spin?

It is only from about an hour out that experts can tell if a thunderstorm or bushfire thunderstorm is going to spin, according to Mr McCarthy.

“What that does is allow meteorologists to tell if the air is moving towards or away from [the radar],” he said.

“If you get air that’s going away from you right next to air going towards you, that tells you that there’s a point in there that the air is rotating around.”

Mr McCarthy said there were also some visual indicators but they were only just starting to be understood.

Dr Lareau said, meanwhile, said we have a lot still to learn about fire tornadoes.

“It is likely that a number of different processes are at play, and that those processes can differ from case to case.”

What is clearly understood is these rotating fires can be deadly.

He said the Carr fire vortex generated surface winds greater than 225kph, destroyed high-tension powerlines and killed a firefighter who was in his truck.

“Like the [NSW] case, the truck was flipped, tossed and rolled off of the road.

“The vortex also contributed to the collapse of a house that led to the death of a grandmother and her grandchildren. It was quite tragic.”

While the Canberra and Carr instances involved bushfires impacting suburbs, Mr McCarthy said the link between supercell bushfire thunderstorms and city strikes was not clear-cut.

It is difficult to draw conclusions with so few examples, especially as there are many factors at play.

“You have to have a very intense fire, plus an atmosphere that could almost support a thunderstorm, plus some mechanism for pushing the fire to rotate one way or the other,” he said.