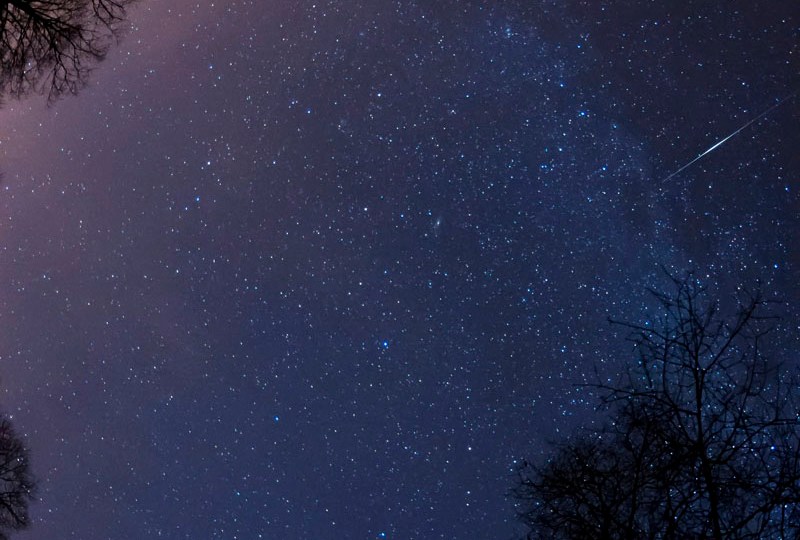 A glimpse of the Geminids meteor shower in 2015. Photo: AAP

Nature is putting on a spectacular light show this weekend, and it’s definitely worth watching.

The annual Geminid meteor shower has once again returned to our summer skies, and will peak over the weekend.

For Macquarie University astrophysicist Tayyaba Zafar, the Geminids are the kings of meteor showers because they produce the highest number of meteors – otherwise known as ‘shooting stars’.

They’re also one of the most colourful, with a range of different hued meteors shooting across the night sky.

That’s because the Geminids are produced by the dust and debris left behind from an asteroid, and as they burn up in our atmosphere, their colour varies depending on their chemical composition.

Another reason the Geminids are worth the effort is that they’re slow-moving, at a relatively sluggish 20 to 30 kilometres per second.

This makes them even more spectacular, said Dr Zafar, because you can see them shoot across the sky for more than a couple of seconds.

Astrophysicist Jonti Horner of the University of Southern Queensland who’s been mad about meteor showers since he was a kid growing up in the UK, said the Geminids are his favourite.

They even outrank the other two big annual meteor showers, the Quadrantids and the Perseids, which are both only visible from the Northern Hemisphere.

“They’re one of the three best meteor showers of the year, and over the last 20 years or so they’ve gradually, very slowly, intensified so they’re now really… the best of the three,” Professor Horner said.

And given it’s summer, the Geminids are a great excuse to find some company and a good observing spot, and sit back and wait for them to appear.

“If you’ve got someone to sit there and talk to, you just sit there looking up at the sky and tell stories and relax and have fun,” Professor Horner said.

“It’s a really lovely way to spend your time.”

So if you want to get your own slice of shooting star viewing, here’s our guide to what you need to know.

When can I see the Geminid meteor shower?

The Geminids have been visible in the night sky since December 4 and will be shooting through our heavens until December 17, Dr Zafar said, as the Earth moves through the loop of dust and debris left behind by near-Earth asteroid 3200 Phaethon.

They will be reaching their peak this weekend

So Saturday night and early Sunday morning (December 14 and 15) is the best time to look for them as that’s when the most meteors will be streaking across our skies.

If you don’t want to stay up all night to see them, Professor Horner recommends getting up early rather than staying up late.

“If people have the freedom to decide whether they observe earlier or observe later, I’d actually say set your alarm for one or two o’clock and stay up until dawn, rather than going out at 9pm and staying up until 1am.”

That’s because the maximum numbers of meteors are forecast to be just before dawn on Sunday morning, he said.

However the peak is quite broad, so you should get some spectacular viewing from midnight onwards.

If Saturday night is going to be cloudy where you are, you’ll still be able to get fairly good viewing the night before or the night afterwards.

Meteors are best seen with the naked eye, Professor Horner said, because you’re looking for things streaking across a large bit of sky rather than zooming in on something in particular.

But, Dr Zafar warned, if you want to catch the full spectacle of the meteor shower at its peak make sure you give your eyes at least 30 minutes to adapt to the darkness, so start observing at least 30 to 40 minutes before that time.

“When you just get out and look at the sky you might see only bright stars,” she said.

“By the time your eyes start adapting, you can also start seeing the faint stars which were invisible when you just stepped out.”

Unfortunately, the full moon will wash out some of the fainter meteors this weekend, but you should be able to see between 20 to 40 per hour which is still a good number, Dr Zafar said.

Where should I be looking in the sky?

As their name suggests they are called the Geminids because their origin point traces back to the constellation Gemini, in particular to near the bright star Castor.

“These meteors are moving around the Sun together, all in the same direction,” Professor Horner said.

“That means they all seem to come from the same point in the night sky, and they spread out because of perspective as they get closer to us.”

As long as that point is above the horizon, you should be able to see meteors from the Geminids anywhere in the sky, he said, but the closer to that point the more you’ll see.

And the further north in Australia you are, the more meteors you’ll see — that’s because Gemini is a northern hemisphere constellation.

What about the smoke haze from bushfires?

Any smoke haze from bushfires will have the same effect as a bit of fog on making the meteors harder to see, Professor Horner said.

“You’ll lose the fainter (stuff) first, and it just depends how thick the smog is as to how much will be hidden.”

Smog will also help the moonlight get scattered more widely, making the full Moon a bit more of a nuisance too, he said.

But he said the Geminids are still worth making the time to look at.

And if after all that you’re still not convinced of the benefits of getting up early this weekend, the Geminids will be back, better than ever, next year.

Geminid meteor shower will light up our skies this coming weekend