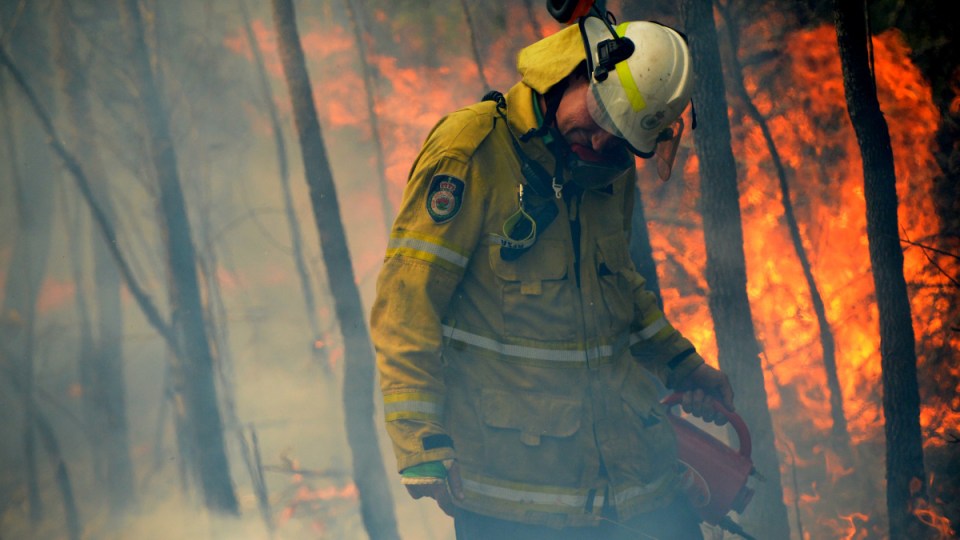 Firefighters are bracing for temperatures to soar to 40 degrees in parts of NSW as they battle to contain devastating bushfires.

After a slight reprieve on Sunday, the weather is expected to take a turn for the worse on Tuesday when the mercury is tipped to soar.

Fire crews are racing to contain a number of blazes around the state and undertake critical back-burning and containment work ahead of Tuesday.

About 90 fires are burning across NSW, half of which are not contained.

Most are at watch an act level but authorities are keeping an eye on two big fires in the Singleton area – the Paddock Run and Little L Complex fires – and another Gospers Mountain in Sydney’s northwestern outskirts that has merged with neighbouring fires.

The NSW Rural Fire Service has warned of a very high fire danger for a number of areas in NSW on Monday which will increase on Tuesday with hot, dry and windy conditions.

There is Very High fire danger forecast for a number of areas in NSW today. Fire dangers are set to increase tomorrow with hot, dry and windy conditions forecast. Take this time now to discuss your bush fire survival plan and know what you will do if fire threatens. #nswrfs pic.twitter.com/mZ4x50vqD5

The Bureau of Meteorology has warned much of inland NSW will “swelter” through a heatwave early this week with hot 40-plus-degree days and very warm 20-plus-degree nights.

While dense smoke from large fires to near Warragamba Dam and the Wollombi National Park as dissipated over Sydney in the past 24 hours it’s set to return Monday afternoon and overnight.

Queensland has a “very high” fire danger rating on Monday but conditions are expected to ease during the week.

The state’s Northern Goldfields and Upper Flinders area will feel the worst of conditions that have fuelled fires for months on end, with the Bureau of Meteorology’s rating there set at severe.

Conditions did ease over Sunday, meaning a number of fires that caused chaos last week were brought under control and scaled back.

A watch and act warning was in place for a bushfire burning in the Burrum Coast National Park late on Sunday, while fires at Mount Stanley, Redbank Creek, Patrick Estate on the edge of Lake Wivenhoe and Cypress Gardens carried an advice alert.

Fire danger ratings across the state will ease further on Tuesday and Wednesday, bringing a little relief for exhausted fire crews.

Temperatures set to soar into 40s in NSW heatwave