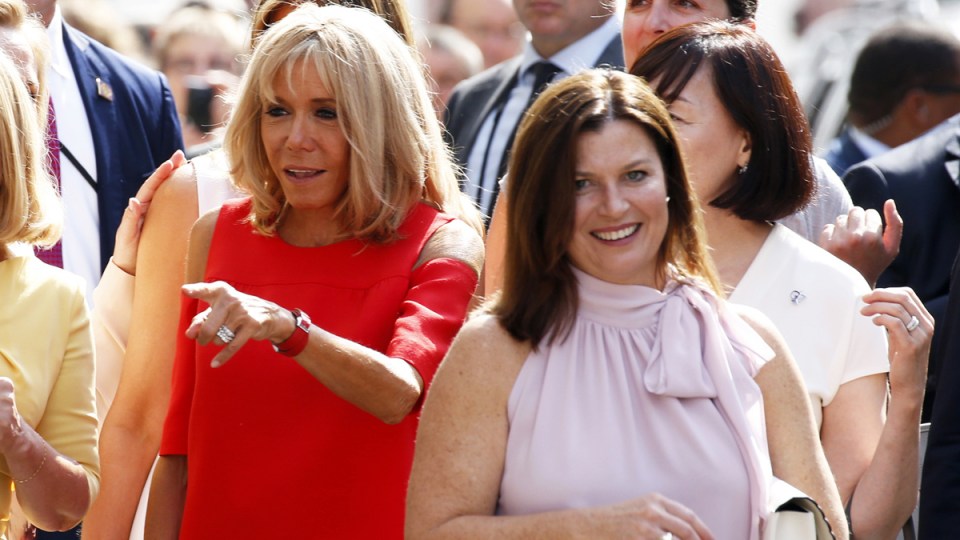 Brigitte Macron and Jenny Morrison walk the streets of Espelette during the G7 summit in August. Photo: EPA/Getty

Jenny Morrison has revealed how she “horrified” Brigitte Macron, the wife of the French president, by enjoying a swim at a beach in France with UK Prime Minister Boris Johnson.

Mrs Morrison discussed the effect of security on her family’s day-to-day life in an exclusive television interview on Sky News with her husband Scott Morrison on Wednesday night.

Asked about the British PM, she revealed they had bumped into each other at the beach during the G7 conference in Biarritz.

“He and I, swimming in the ocean. But he was like further out.”

The Prime Minister added: “Mrs Macron was horrified that Jenny went swimming in the ocean.”

Mrs Morrison said she tried to stay home with her two daughters, if possible, rather than travel overseas.

“I was trying not to go away this term at all. There was a lot of travel earlier and I had to do that, but then I just tried to have some time at home with them. They miss us,” she said.

“When I was Immigration Minister we, sadly, had to have full-time security there for a quite long period of time … there was some amendment and changes made to the house at that time,” Mr Morrison said.

“That was when we kicked out Vella, the head of the bikie gang.

“Now thankfully nothing came of that, but when you are dealing with outlaw motorcycle gang bosses, you don’t take chances.

“I stand by my decision to cancel his visa and I stand by the decision not to review that decision.

“He is in Malta and, according to our government’s policy, that’s where he will stay.”

Mr Morrison also confirmed he wished his neighbour, Governor-General Peter Hurley, a happy new year when shoeless and wearing board shorts – much to the consternation of his wife.

But he no longer spends much time in the family home in his electorate.

“That brings the whole security bandwagon, which is quite inconvenient to my neighbours,” he said.