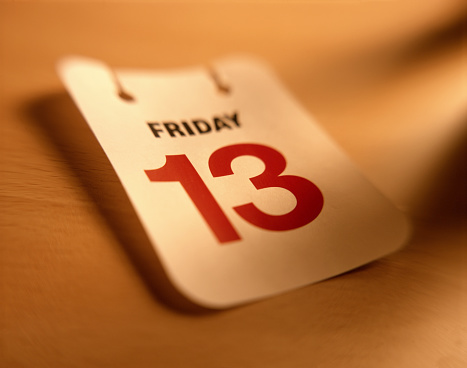 Triskaidekaphobia is the scientific name for the fear of the number 13. Photo: Getty

An irrational fear of things like frogs, heights and small clusters of holes could be more common among Australians than we think.

About one in seven Australians (nearly 15 per cent) will develop a phobia or anxiety disorder during their lifetime, research from the federal health department shows.

Phobias are an intense fear of very specific things like objects, places, situations or animals that will cause a person to avoid them at all costs.

In a unique country like Australia, some common phobias have worse implications than others.

People who suffer a phobia of flying might never get the chance to travel to other countries, and ophidiophobes – people who have an irrational fear of snakes – will struggle to cope in rural areas and even some suburbs in Queensland.

“Simple phobias tend to be very specifically about particular objects or animals, which is what makes them quite unique,” Dr Swinbourne told The New Daily.

“People who have phobias are not necessarily afraid of things like guns or electrical outputs that could kill you, but are afraid of heights, separation and spiders.”

Dr Swinbourne said another possible explanation for phobias was evolution.

“In an evolutionary sense, we’re wired to have a fear response to some stimuli like snakes, which is why you get snake phobias in Ireland or New Zealand where there are no snakes,” she said.

Dr Swinbourne said the “tipping point” between a fear and phobia was when an aversion to something was so extreme that it affected a person’s life to the extent they were unable to function properly.

In one case study, a 26-year-old woman developed a fear of frogs, known as ranidaphobia, after she accidentally mowed over a group of frogs in her backyard.

Traumatised by seeing their bloody bodies chopped up by the mower, the woman became so fearful of the animals “her life became a misery”.

At night she could hear frogs croaking at the riverbank near her backyard and she would often suffer nightmares about frogs, which led to insomnia.

But Dr Swinbourne said thankfully even the most unusual phobias were very treatable.

“Treatment often includes cognitive behaviour therapy, where the person’s thoughts about the object are listened to, then graded exposure,” she said.

“If you have a fear of heights, we’ll take you to go up a ladder, then a couple of stairs, while doing relaxation techniques.

“Bit by bit we will get you up higher until you can actually experience the stimulus without being afraid.”

One phobia on the extreme end of the spectrum is agoraphobia, a type of anxiety disorder that makes sufferers fear open or crowded spaces.

Some agoraphobics are too scared to go to the supermarket or shopping centres, while others are so terrified of going outside that they can’t even make it to their mailbox.

One popular theory explaining trypophobia suggests the fear is derived from an evolutionary response to things associated with skin disease, such as smallpox, parasites or other infectious conditions.

An emerging phobia is nomophobia, a fear of not having mobile phone access. This can include fear of low battery, no network coverage or no phone credit.

Hippopotomonstrosesquippedaliophobia, one of the longest words in the dictionary, is the name for a fear of long words.

Phobias of frogs and outdoor spaces among many things sparking anxiety