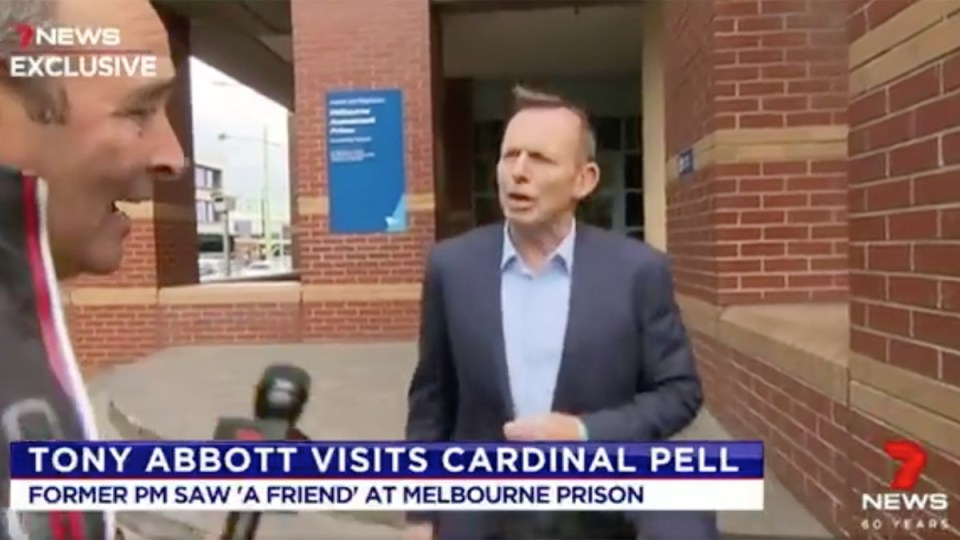 Tony Abbott has visited the jail where convicted pedophile Cardinal George Pell is being held in Melbourne, declaring he was “simply visiting a friend”.

Seven News on Monday filmed the former prime minister leaving the facility where Cardinal Pell is being held after being found guilty of forcing two 13-year-old boys to perform oral sex on him.

Mr Abbott ignored a reporter’s questions about Cardinal Pell before climbing into a taxi.

“Look, I was simply visiting a friend, that’s all,” he said.

He did not respond to questions about “What sort of spirits” Pell was in.

Cardinal Pell will have a final chance to overturn his conviction in March, with the High Court agreeing to hear appeal arguments.

One of the boys had died and the sole witness to the attacks was the surviving victim.

“For Tony Abbott, a former prime minister, to visit Pell, a convicted pedophile, is a disgrace and a cruel insult to his victims,” Mr Hinch said.

The offences were committed in the sacristy of St Patrick’s Cathedral after mass in December 1996.

Earlier this year, Mr Abbott confirmed he had phoned Pell the day after his guilty verdict was made public.

“Let’s see what the appeal court finds. It’s a shocking and devastating result.”

Former prime minister John Howard wrote a character reference for Pell after he was convicted for child sex abuse.

Mr Abbott defended his phone call to his friend despite the “damning verdict”.

“When it comes to the phone call, look, I’m not a fair-weather friend,” he said.

“This was someone who was obviously going through a very, very bad experience.

“Now I’m not saying that he’s the only one going through bad experiences, but he has been a friend of mine for a long time, and at a time like this you’ve got to feel for people.

“You’ve got to feel for the victims, who’ve been dreadfully betrayed by an institution they should have been able to trust.

“You’ve got to feel for the people who are dismayed by this verdict against someone they’d put up on a pedestal.”