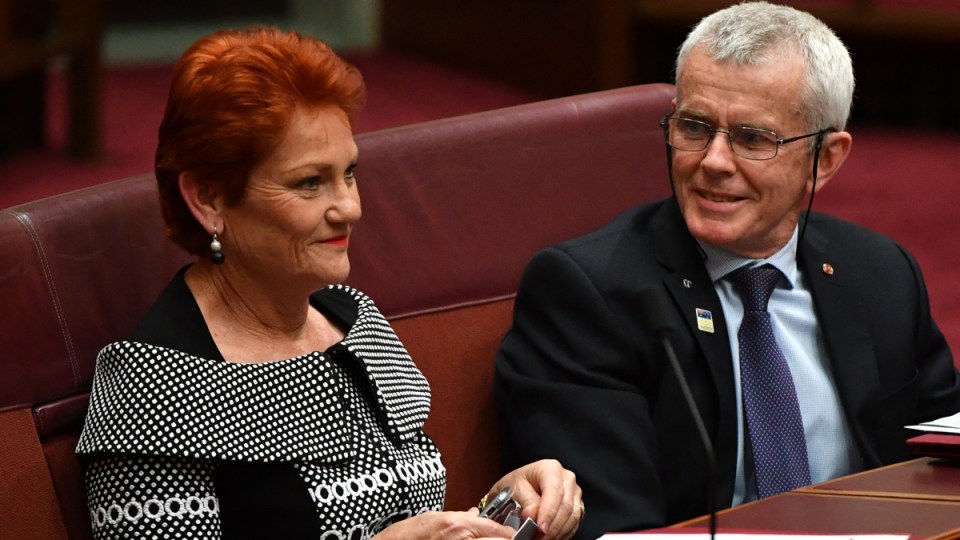 One Nation leader Pauline Hanson and Senator Malcolm Roberts in the Senate on Thursday. Photo: AAP

The Coalition’s controversial push to make it easier to deregister unions and ban officials failed to pass the Senate late on Thursday.

The “ensuring integrity” bill had been expected to pass the Senate, with the federal government appearing to have the numbers to see it become law.

But, after more than half an hour of voting on amendments late on Thursday, the final vote on the bill was deadlocked at 34-34.

Pauline Hanson’s One Nation had been to vote in favour of the legislation after securing government support for changes she had sought.

#BREAKING The Senate has not agreed to the amended Fair Work (Registered Organisations) Amendment (Ensuring Integrity) Bill 2019. The bill has been defeated, the Committee divided: Ayes 34; Noes 34 #auspol

Under the One Nation amendments, unions will face action for criminal conviction or a civil court orders only, rather than findings against them.

“The intent of these changes is to further protect Australian workers and minimise the risk of deregistration over paperwork misdemeanours,” Senator Hanson told parliament.

But Senator Hanson and her One Nation colleague, Malcolm Roberts, voted against the bill at the final hurdle.

Centre Alliance backed the bill after getting the government to attach a three-strike demerit point system for unions and officials.

Other changes include removing the minister’s power to apply for deregistration and reducing the grounds for disqualification.

A public interest test for union mergers will be applied only if one of the organisations has a history of rule-breaking.

We defeated the Ensuring Integrity Bill. Thank you to every person who stood up and said no to union bashing #auspol

But Senator Lambie said on Thursday she was not prepared to throw every union member in the country under the bus because Mr Setka refused to go.

“It’s only through my amendments that the right to strike is protected,” Senator Lambie said.

“Anything less is frankly un-Australian and I’m shocked nobody else has seen to protect that fundamental right.”

Earlier, Labor Senate leader Penny Wong accused the government of ramming through the bill after the upper house supported a motion to have the final vote on Thursday afternoon.

“We have a government with no integrity, a government whose integrity is in tatters, coming into this chamber and demanding the legislation be passed in the name of ensuring integrity,” she told Parliament.

“This bill is not about integrity, this bill is about an attack on working people and their representatives.”

Government Senate leader Mathias Cormann said passing the bill was critically important to crack down on unions that repeatedly break the law.

“This bill does nothing to prevent organisations which respect the law from continuing to work in their members’ interest,” he said.

Cabinet minister Simon Birmingham accused the opposition of being a “pack of rank hypocrites”, saying the bill had been debated for two days during extended sitting hours.

“Yet, of course you’ll hear howls and complaints claiming that this is somehow being rammed through,” he said.

The Greens, who opposed the bill, tried to amend it so the new regime did not come into place until a national integrity commission was up and running.