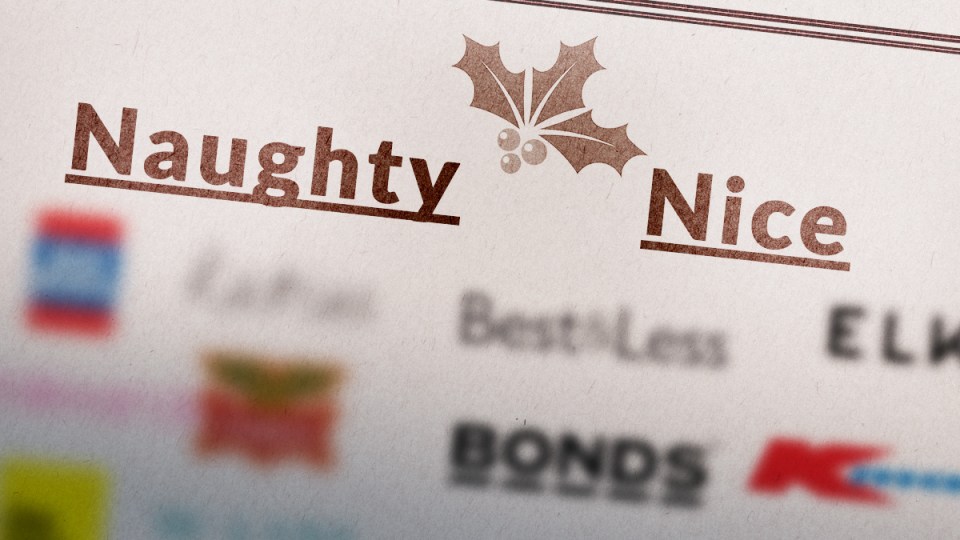 Big brands have been ranked on a 'naughty or nice' list – but the naughty ones don't want to comment. Photo: Getty/TND

Some of Australia’s top retailers have refused to answer questions about failing to give employees in foreign countries a living wage.

Before the Christmas season, Oxfam Australia released a ‘naughty or nice’ list of fashion brands that have failed to make commitments ensuring payment of living wages to women making their clothes in countries like Vietnam or Bangladesh.

Some of the big names appearing on the list include Just Jeans, Peter Alexander, Jay Jays, Myer, Rivers, Katies, W.Lane and Big W.

“Women who spoke to us were being paid as little as 62 cents an hour in Bangladesh,” said Sarah Rogan, the leader of Oxfam’s Australia Labour Rights group.

“They’re unable to afford treatment when they fell sick, to send their children to school, to make their pay stretch to put enough food on the table and being separated from their children.”

Many of the brands have gone to ground following the report, refusing to do interviews or answer questions over what their foreign employees are paid.

Both Zara and Just Group, which owns Peter Alexander, Jay Jays and Just Jeans, refused to respond when contacted by The New Daily.

A media relations manager for the Noni B Group, which runs Katies, Rivers and W.Lane said its CEO Scott Evans was not doing interviews on the subject.

In response, it sent through the company’s ‘ethical sourcing conduct’ which states that the retailer: “hold ourselves to the highest ethical standards and we expect no less from our supply partners”.

It goes on to list a living wage as a pillar of the company’s support for ethical trading principles.

Ms Rogan said the document was a far cry from what happened on the ground.

“A credible, public commitment includes publishing a clear and appropriate definition of a living wage, along with at least two to three key milestones towards achieving this, and timelines to achieve those milestones,” Ms Rogan said.

“Noni B’s code has neither a clear and complete definition of a living wage, nor it has published milestones.”

Big W was the only brand on the ‘naughty list’ to admit it still had more work to do.

“We care deeply about the rights and lives of the workers in Bangladesh and the research Oxfam released earlier this year brings to light some challenges we have begun to address,” a spokesman for the retailer said.

“We are working collaboratively with our suppliers and global organisations to achieve this, however, we know we still have more work to do.

“We have committed to working with Oxfam on research on responsible purchasing practices and living wage calculations, and continue to be transparent in our approach.”

If big companies passed the entire cost of paying living wages to all workers on to consumers, the price increase of a T-shirt in Australia would be 10 cents, the report estimates.

“There is room within their margins for companies to lift the amount they pay to suppliers for factory wages,” Ms Rogan said.

“A living wage is not a luxury, but is a minimum that all working people should be paid if they are to escape the cycle of poverty.”

The research commissioned by Oxfam and conducted by Deloitte Access Economics says women aged 18 to 25 make up 80 per cent of the factory workers in the global garment industry.

The report affirms that the local minimum wage in Bangladesh equates to just 39 Australian cents an hour, 64 cents in Vietnam and 93 cents in China.