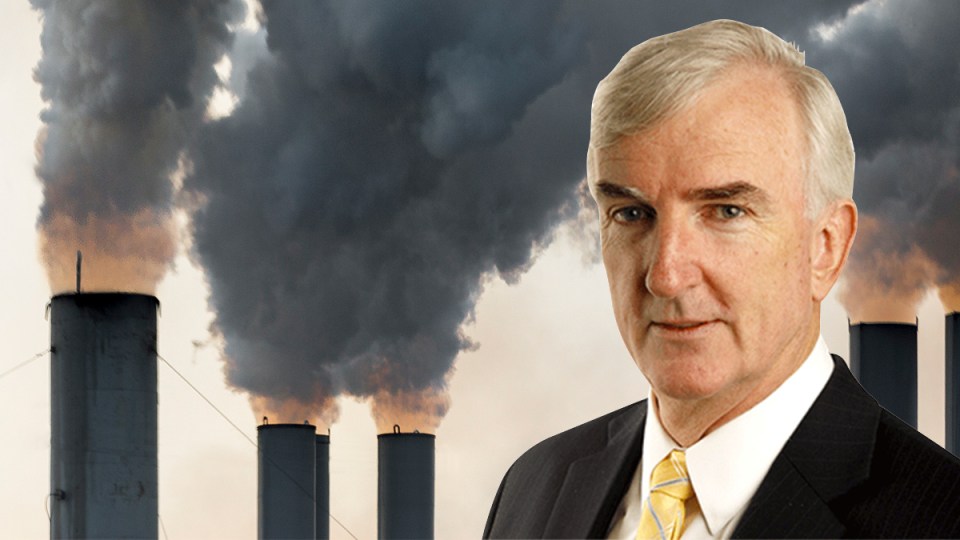 The introduction of a carbon tax should be the first step towards a more rational economy. Photo: The New Daily

Among prime ministers’ legacies are the lasting images they leave – the moments of triumph, of humanity, of loss, of leadership.

Instead, he is on track to be remembered for the indelible sight of proffering a lump of coal to federal Parliament.

If the stunt fits …

The gallery photographers captured the image, the symbolism, for whatever final showreel Mr Morrison receives, but now the stunt has captured the prime minister.

Ignoring the potential circuit-breaker of the drought and bushfires to exert leadership over the coalition’s fossil-fuel-owned rump and grab a carbon policy in keeping with most Australians’ wishes, Mr Morrison has doubled down in defence of his precious coal.

In the process, he has caught himself up in his own carbon spin cycle.

The Trump template of telling lies and sticking with them in the face of facts demonstrably works for the faithful.

Climate deniers, like anti-vaxxers, are reinforced by the sound of their own opinions.

Those with immediate financial incentives – their jobs, their funding, their investments, their political donations – may want to believe what is most comfortable.

But the repeated spin becomes entrapment as those in the pragmatic middle ground – those who decide who wins government – physically sense the climate is undeniably changing for the worse.

All the stunts in Mr Morrison’s repertoire eventually can’t distract from the insurers, the regulators, the central banks and financiers spelling out the obvious: The scientists are right, the fossil-fuel apologists are wrong.

The evidence of our own lived experience accumulates.

The reaction to Mr Morrison’s effective “we’re doing what we can but there’s nothing we can do about it” claim last week showed it’s not washing.

Particularly, his line that “we’re only 1.3 per cent of global emissions so we have no impact” has been trotted out and shot down so often as to be useless.

Cue the now-usual ripostes – we were only a small proportion of allied forces, so we had no impact in war; as a taxpayer, I’m only a tiny proportion of total revenue so there’s no need for me to pay.

The other key lie, “I am up for taking action on it, not just jabbering on about it”, is destroyed in two graphs.

The only way the government can try to claim the billions it’s blowing on  “direct action” are achieving something is by cherry-picking the per capita CO2 emissions figure, as the Department of Environment and Energy dutifully highlights in its quarterly national greenhouse accounts. 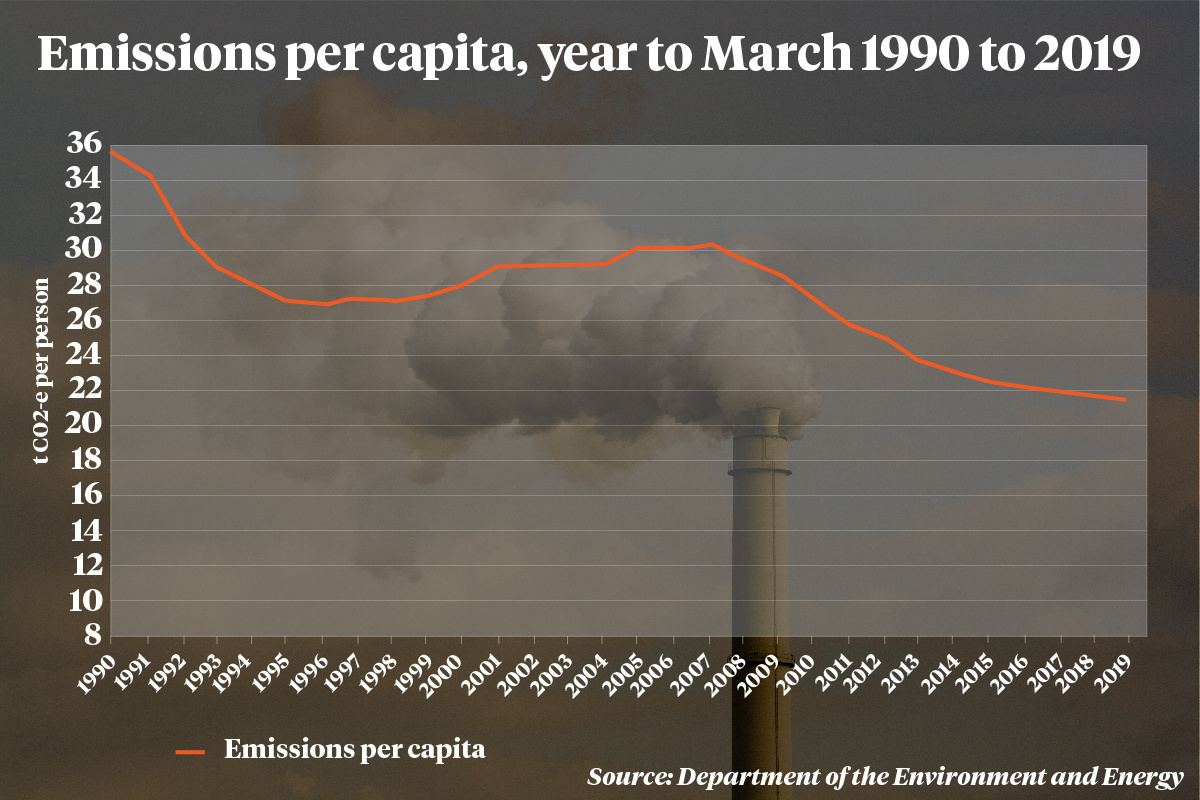 The graph looks good, but it can’t hide the reality of Australia’s total emissions printed a little later in the accounts – they were falling pretty much until the coalition repealed the carbon tax, subsequently rose and have, at best, plateaued. 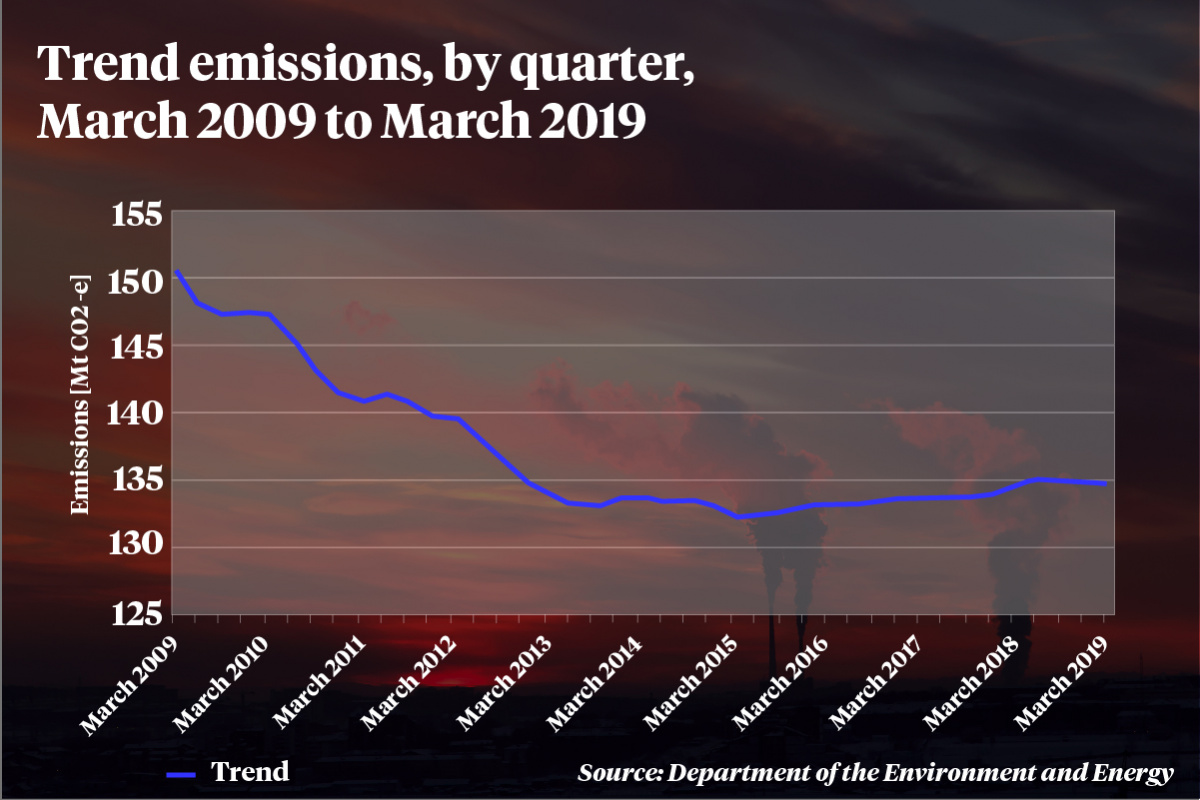 The odd politician, such as the relevant environment minister, might try to spin something out of a small movement in one quarter or another, but the simple graph does not deceive.

And the trap of preferring per capita emissions figures is that it highlights Australia’s status as among the world’s very worst carbon polluters.

Man, woman and child, Australians are bloated with greenhouse gases, CO2 bullies on the global stage.

There are a few minor oddities (New Caledonians, Luxembourgers, Gibraltarians) who burn more carbon than individual Australians, but otherwise it’s only the folk of oil and gas dictatorships who manage to flare more than our 16.8 tonnes of carbon dioxide per head each year.

We are worse than the infamously gas-guzzling Americans on 16.1 tonnes.

Personally, I think per capita statistics are the most relevant for the world.

Human-caused climate change is stateless. It is our species’ challenge.

We’re all in this together, which makes it obscene for some of the world’s very richest people, gorged on carbon, to hold back from meaningful action while demanding more from the relatively carbon poor.

It is a lie to pretend the Australian government is “not just jabbering on about it”.

We have the proof of that lie – the image of the lump of coal prime minister.

Morrison caught in his own carbon spin cycle