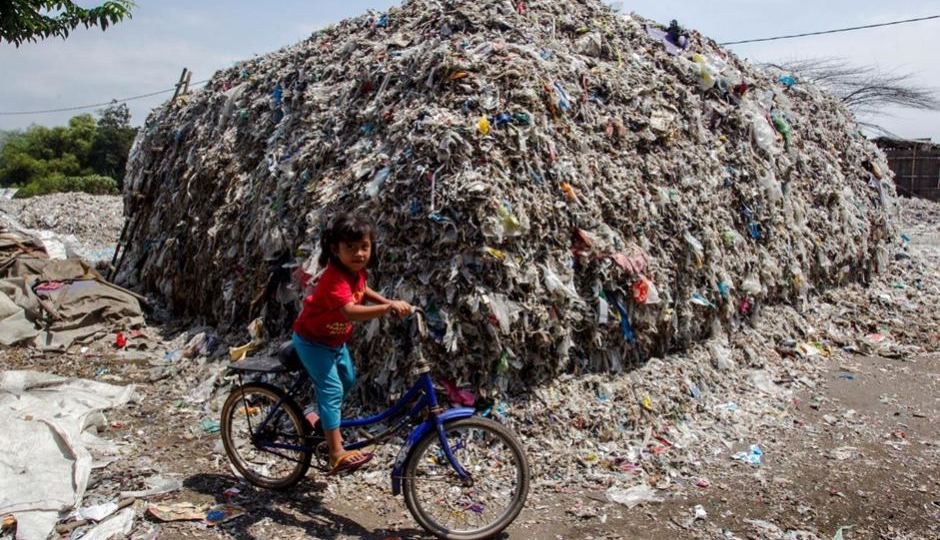 Some of the rubbish found at the Brantas riverside had "Made in Australia" labels. Photo: Supplied/Fully Syafi

Exported Australian plastic waste may be “poisoning” villages in Indonesia, according to a new report which found eggs near dumping grounds had some of the highest levels of dioxins recorded in Asia.

Dioxins are persistent organic pollutants which have been identified by the international scientific community as “the most hazardous and toxic chemicals on earth” and have been linked to birth defects and Parkinson’s disease.

The report, by the International Pollutants Elimination Network (IPEN) — a global network of NGOs — found plastic scrap exports are not just resulting in visible pollution, but also contaminating food chains in “dangerous concentrations”.

The study tested free-range chicken eggs in the East Java villages of Tropodo and Bangun, where large amounts of plastic waste from the United States, the United Kingdom and Australia end up.

It found eating just one egg would result in dioxin levels 70 times higher than the “tolerable” intake under standards set by the European Food Safety Authority.

“What that effectively means is that you won’t necessarily drop dead or become ill immediately after eating one of those eggs,” toxins expert Lee Bell, who also co-authored the report, told the ABC.

“But if you’re eating those eggs over a period of time, then your risk of contracting diseases such as cancer, endocrine disruption, immune system disorders and so on, dramatically increases.”

The dioxin levels found in the egg samples are one of the worst in Asia, and only second to eggs sampled from Bien Hoa in Vietnam, where the soil was heavily contaminated by Agent Orange used by the US military during the Vietnam war.

Indonesia has become the second-largest dumping ground for Australian waste paper and plastic since China banned imports of foreign waste last year, according to figures by the Australian Bureau of Statistics between 2017 and 2019.

A report published in June by a group of NGOs found imported plastic waste has doubled between 2017 and 2018, with Australia contributing 728 kilotonnes of exported waste between July 2017 and July 2019, according to ABS data.

While tracking plastic imports once they arrive in Indonesia can be a difficult task, Dr Bell said “Made in Australia” labels could be found on waste products at the locations in the study.

“It’s clear that the materials are arriving from countries like Australia, are ending up in the Indonesian environment, either being burned out in the open or [sent] to burners,” he said.

‘The smoke is suffocating’

Mounds of exported plastic which cannot be recycled, due to various reasons including contamination, are often sold to tofu factories where the plastic is burned for fuel.

Anam, a resident of Tropodo who only goes by one name, told the ABC the factories relied on plastic for the tofu industry, despite the alarming health costs.

There are more than 40 tofu factories in the village employing about a quarter of its residents, and Mr Anam claims they have been burning toxic plastic for their fuel since 1996 due to it being more “cost effective”.

“Plastic catches on fire very easily, and residents believe the fire is much hotter from plastic in comparison to wood, but the pollution from it is almost unbearable,” he told the ABC.

“The smoke is suffocating, I’m scared to leave the house during daylight. There are 10 factories just by my house.”

This Indonesian village is being swallowed by plastic waste – and much of it is coming from Australia. #abc730 @davidlipson pic.twitter.com/ibcWDRLxnM

While reports of food contamination have circulated in his village, he told the ABC the main concern was still the black smoke omitted from burning plastic.

“I often eat eggs from around here and I’m fine, for now. But who knows what will happen in 20 years’ time?” he said.

“I believe we can switch to burning wood scraps and pellets, but the earnings will be taking a big hit … it will decrease by half, and that’s the bottom line.”

Earlier this week, senior local official Saiful Illah admitted to local media that factories had been burning plastic for fuel, but dismissed claims of “poisonous” contamination.

“It’s been years and everyone is fine … everyone here eats eggs,” he told IDN times.

In a statement sent to the ABC, Rosa Vivien Ratnawati, a senior official from Indonesia’s Ministry of Environment and Forestry, said the open burning of plastic is a violation of the country’s laws.

“The [Indonesian] Government has intensely visited the field and coordinated with local government to educate residents,” the statement reads.

She added that the Government “will not tolerate imported waste.”

Earlier this year, the Indonesian Government said it had returned 428 containers of contaminated plastic and paper waste to its originating country.

The Australian Department of Environment and Energy said in a statement the Morrison Government had already announced its intention to “ban plastic waste exports along with paper, tyres and glass”.

“The responsible recycling of plastic waste is a key government priority,” the statement said.

“Australia has strict laws concerning the exports of hazardous or contaminated materials, including recyclable materials. If companies are found to be breaching these rules, then appropriate compliance and enforcement action will be taken.”

‘I am not afraid’: The modern unknown soldier risks it all in Ukraine
Greens sign up for Labor’s looming jobs-and-skills summit as Liberals stick with boycott
Joe Biden’s $430b green victory for the environment
China cementing its Thailand ties with joint military exercises
NRL: Titans frantic to end 10-game losing streak as Manly showdown looms
AFL: Western Bulldogs cling to finals hopes after GWS thriller
Fireworks cancellations during fire bans has industry seeking compensation for ‘interference of trade’
Today's Stories