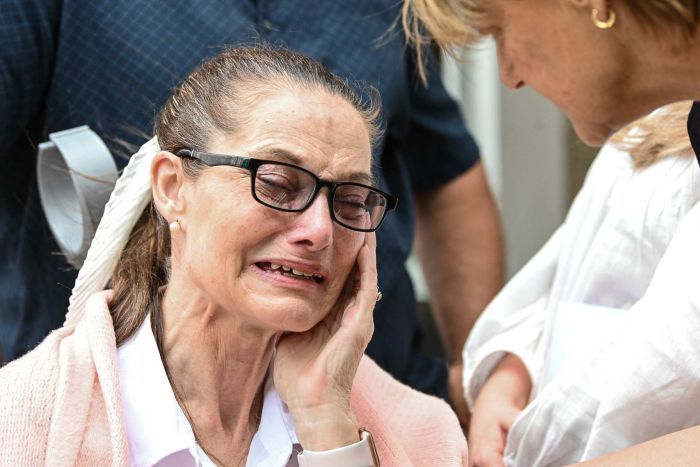 One of the women involved in the class action outside court on Thursday. Photo: ABC

More than 1350 women who suffered devastating side effects from a pelvic mesh implant used to treat issues from childbirth have won a class action suit against global giant Johnson & Johnson.

In what lawyers said was the largest women’s health class action in Australia’s history, Federal Court Justice Anna Katzmann said the evidence in the case was “overwhelming” and found the creator of the devices “negligent”.

She said the devices, which were banned in 2017, were not tested properly, and that the companies responsible knew they did not have sufficient data to show they were safe.

Speaking outside court on Thursday, Julie Davis, one of the applicants involved directly in the case, said the judgment was “a great step forward”.

“We were treated like guinea pigs,” she said. “They lied about it and did nothing to help.

Justice Katzmann said compensation – expected to be in the multi-millions – would be determined in February.

In an hour-long judgment, she said the maker of the device engaged in misleading or deceptive conduct, was driven by commercial interests and failed to give appropriate or sufficient remedial action once it knew of the problems.

Justice Katzmann said the risk assessment of the device was a “box-ticking exercise” and when harm was identified it was not rectified.

Some of the women involved in the suit were present in court. They ranged in age from their early 30s to their 80s and were accompanied by friends and family.

Some came with canes and others had to shift uncomfortably during the judgment, which they said was because of chronic pain associated with their mesh implants.

Others were visibly emotional, patting down their eyes, overcome after coming to the end of the case.

Some of the women shook their heads as Justice Katzmann described how designers took mesh products “from their existing bag of tricks”.

The device was created by medical company Ethicon and its subsidiaries, which is owned by global giant Johnson & Johnson.

Johnson & Johnson has sold more than 100,000 mesh and tape implants but said that did not equate to the number of women affected.

Shine Lawyers brought the class action on behalf of the women.

Speaking outside court, special council Rebecca Jancauskas said she understood there were about 8000 people affected by the implants and encouraged more to come forward.

“The court didn’t make a finding today in terms of the amount of damages,” she said.

“But given the years of suffering these women have endured, the fact that their lives have been turned upside down and they can no longer function as women, as mothers and as employees, we would expect that compensation to be significant.”

For Louise King, the decision to head to court was never about the money.

The mother-of-two had mesh implanted in 2006 following major prolapses in her vagina and bowel.

Speaking to the ABC before Thursday’s judgment, Ms King said she did not know there was a problem with mesh at the time.

“There was no option to choose anything else,” she said.

Afterwards, she found having intercourse with her husband of nearly 40 years excruciating.

“I went back to the doctor three times and he told me I was imagining it,” she said.

“He was quite rude.”

Ms King eventually had a breakdown from her pain and discovered the class action.

Finding out there were other women in a similar situation was a turning point.

For her, the case has been about having her day in court and holding someone accountable.