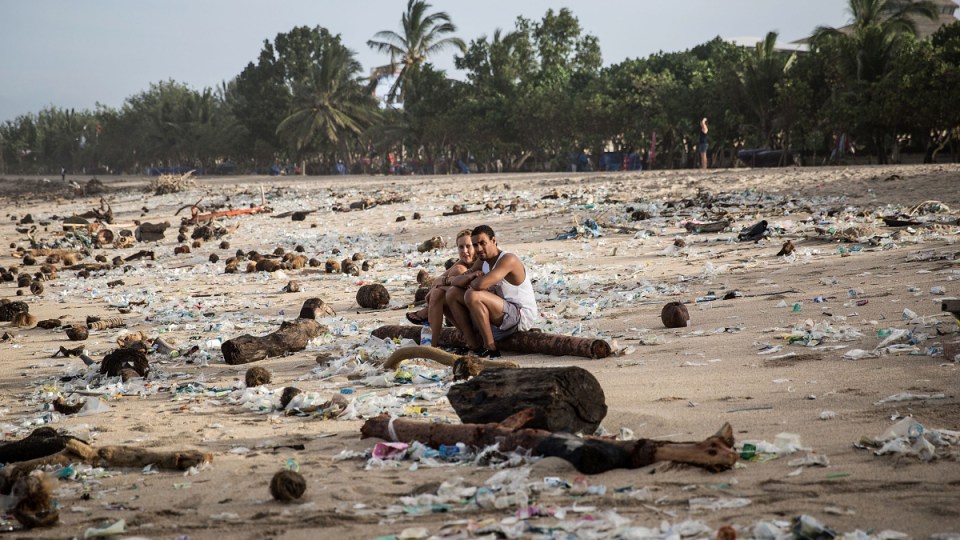 Rubbish and plastic is strewn along Bali's Kuta beach, a favourite among tourists. Photo: Getty

Once-mystical places known only by a handful of intrepid travellers, some of the world’s most serene destination are now social media stars.

Or, more accurately, the backdrop to the selfies of the people who think they’re stars.

And as formerly pristine bucket-list locations become packed with people and discarded plastic, Australians are being urged to look elsewhere for their next holiday spot.

Among the places on this year’s ‘No List’ are some of Australia’s favourite holiday spots.

Every year, more than one million Australians slip into their Bintang singlets, boardies and thongs and hop on a plane to Bali.

Known for its volcanic mountains, stunning beaches, nightlife and yoga retreats, it’s no wonder the island is Indonesia’s most visited.

But that’s exactly why we shouldn’t go there any more.

The island has suffered so much over-tourism in recent years that the government is drafting a tourist tax of about $15 to go toward environmental recovery and the preservation of Balinese culture.

In 2017, the government declared a ‘garbage emergency’ over the amount of plastic and rubbish washing up on shorelines.

More than three million kilograms of waste is left on the island every day, with only 60 per cent of it ending up in landfills, according to the Bali Environment Agency.

Luxury villas and golf resorts are also crippling Bali’s groundwater supply, diverting most of it away from locals and farmers to wealthy tourists staying in expensive hotels.

Good morning, Ubud! ☕️ :::: I’m a huge fan of morning routines. They set the pace for the day! In Bali, my favorite mornings kick off with a good workout, a dip in the pool, and a cup of coffee while I think about my goals & organize my plans for the day! What’s your go-to morning routine? :::: #Balimornings #Ubud #Bali #BeautifulDestinations #TLPicks

The island has taken steps to combat its waste problem by banning single-use plastics, as well as pledging to reduce marine plastic waste by 70 per cent by 2025.

But waste isn’t the only issue plaguing Bali – ignorant tourists have been known to abuse alcohol and disrespect the local culture by visiting Hindu sites wearing nothing but bathers.

The site was originally built in the early 12th century as a symbol of the king’s devotion to the Hindu god Vishnu, but was later converted into a Buddhist temple.

The grand complex features a series of stone towers, statues, galleries, chambers, porches and courtyards protected by a five-kilometre moat.

After standing for more than 900 years, the UNESCO World Heritage Site is starting to cripple under the weight of hordes of tourists.

Steps that were once easy to walk on are now slippery, worn down over time by the relentless footsteps of visitors.

Bas-relief sculptures have also been eroded by the hands of tourists touching them. They might soon be placed behind glass to prevent further damage, and wooden staircases might be constructed to stop tourists from treading on the old stone steps.

Angkor Wat’s tourist agency is so concerned about the future of the temples that it has limited the number of visitors allowed at the top of popular sunset spot Phnom Bakheng Hill to 300.

Drought and tourism are exacerbating a water shortage in the Siem Reap area.

This year, four Olympic-sized swimming pools’ worth of water was drained from Angkor Wat’s moat.

Indonesia’s Komodo Island, home to more than 4000 wild Komodo dragons, is on the edge of closing due to mass tourism.

Authorities had initially planned to close the island for one year from January, but decided against it after the environment minister said the dragons were not under threat by human interference.

The Indonesian government is keeping a close eye on the UNESCO World Heritage Site, where visitors have been known to feed the venomous dragons without permission.

If tourism becomes too much to handle, the government might introduce a tourist tax or membership fee.

It is also considering capping the number of visitors allowed on the island.

Tourist attractions that need to stop

Say goodbye to elephant riding because the harmful practice is on the way out.

Demand for elephant rides in countries such as Thailand has opened up opportunities for corruption and animal cruelty to flourish among locals eager to make a dollar.

While the elephants might look calm when people are riding them, the truth is cruel methods have been used to make them behave that way.

Wild baby elephants are tortured with whips, chains and relentless exercise to completely break their spirits in a process known as “the crush”.

These conditions create stress and exhaustion for the highly intelligent animals.

Many were taken from the wild as babies, separated from their families, abused with sharp hooks, chained up at night and refused good nutrition.

Say bye to Bali: The popular travel destinations you should stop visiting