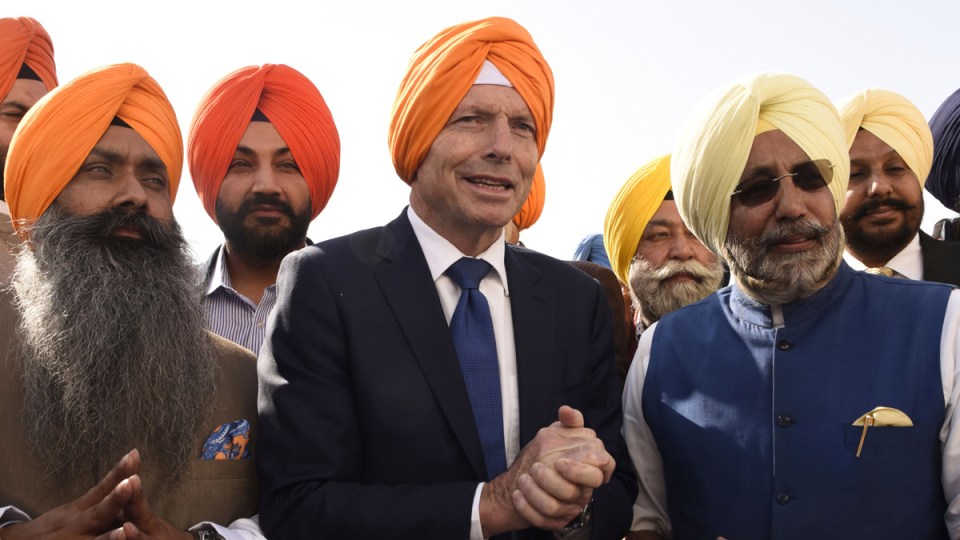 Ten years after he first confessed to being slipped a hemp-laced lassi drink as a young man touring India – which rendered him off “with the fairies for about 12 hours” – Tony Abbott is singing the praises of the subcontinent again.

In a speech to the India Foundation in New Delhi on Monday, the former Liberal prime minister said he wanted to make it his “personal mission” as an ex-PM to deepen ties between Australia and India.

“Many years ago, I was lucky enough to win a scholarship to study overseas,” he said.

“I was tremendously exhilarated at the thought of studying at the world’s oldest English-speaking university and spending time in one of the cradles of Western civilisation – but some instinct said that I shouldn’t travel straight from Australia to England, and fly right over the most significant country on the way; itself a home of civilisation, yet with spiritual links to my own; via much history in common, a shared passion for literature and sport, and a shared commitment to democracy and the rule of law.

“I landed in Mumbai and travelled by train and bus to Udaipur, to Delhi, to Kashmir, and then to Bihar, where I spent two months with Australian Jesuits based in Hazaribagh, Daltonganj and Bokaro Steel City, including time as a teacher’s aide in schools and on missions to the Adivasi hill tribes.

“It was a formative time in my life and left me with a lasting appreciation of India’s great strength and vast potential.”

In a provocative speech, Mr Abbott also warned Australia needed to be careful about putting “too many eggs in the China basket”.

“We might be grateful that India will not be the next China, politically,” he said.

“But why would anyone, especially India’s friends, be so sure that India won’t be the next China, economically? Why should Australian officials think that what one country of a billion people could achieve under the dictatorship of the proletariat is impossible in another that has the blessings of democracy, the rule of law and the English language?

“Unless, of course, they’re closet admirers of a command-market economy, regard the Chinese as somehow superior to everyone else, or – most likely – don’t want to admit that Australia might have put too many eggs into the China basket.

“The often glossed-over reality is that it’s hard for Australia to be a meaningful strategic partner to a country that thinks it can bully its neighbours on the basis of confected territorial claims; that it refuses to submit to arbitration, and tries to resolve unilaterally in its favour.

Mr Abbott said it was hard to see relations with China rising much above the level of a “cold peace” any time soon.

“In Washington, the long interlude of cautious engagement with China seems well and truly over and to have been replaced by a bipartisan policy of careful ‘constrainment’,” he said.

“Again, this is where India comes in. My instinct is that, 50 years hence, India will be much more prosperous and no less democratic; every bit as strong as China, in fact, but far less overbearing.

“I hope that Australia will be a key partner in India’s rise. A world with two democratic superpowers, not just one, will be more free, more open, more prosperous and ultimately fairer to everyone – because that’s the way countries are (even superpowers) when they have to take all their citizens seriously.”

Mr Abbott said the Adani mine was also an opportunity to deepen ties.

“I’m deeply sorry that the now-finally-underway Adani mine in Queensland has faced so much activist sabotage, given the jobs it’s promised to Australians and the reliable and affordable power it’s promised to tens of millions of Indians,” he said.

“But with more of our officials invested in a stronger economic partnership, even one as yet still falling short of a formal free trade deal, there should be more mines like Adani to power India’s future prosperity.”

“Even now, though, Australian officialdom seems unnecessarily cautious about the potential of the Australia-India relationship.”