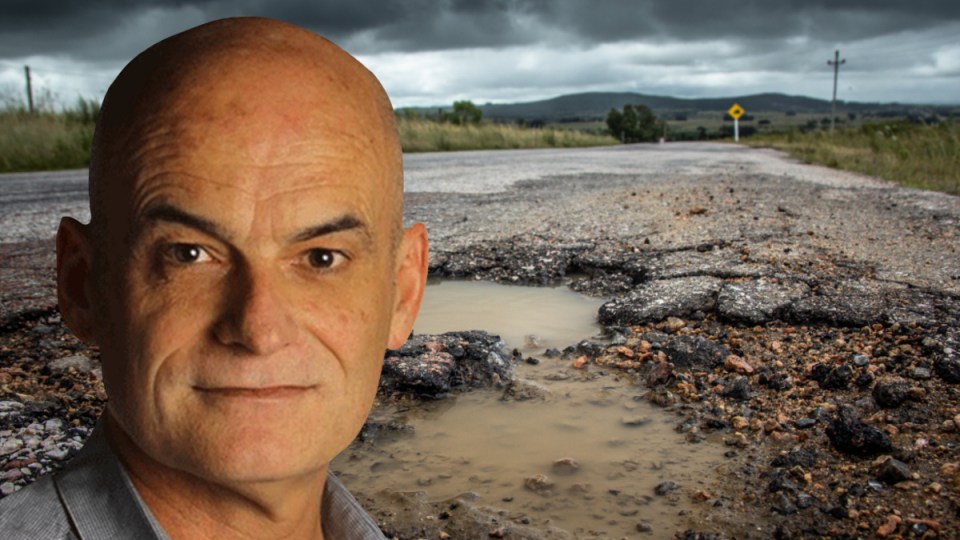 So there I was, driving down one of the busier stretches of bitumen in my neck of the woods, dodging potholes that grow larger by the day, swerving to avoid piles of uncollected rubbish, steering through large puddles of water because the drains have been clogged for months and giving a wide berth to an unregistered dog weaving its way through the traffic, when I was suddenly distracted by a new roadside sign.

Couldn’t miss it, actually. It was one of those big-screen digital displays that often warn you to slow down because of serious problems ahead.

But this was a sign from my local council carrying a much more important community message.

This council, it read, “SAYS NO TO DOMESTIC VIOLENCE”.

It was at that moment that I had a rare epiphany. It’s time to get rid of local government.

We pay rates to our local councils so they can fix the potholes, collect the rubbish, clean the drains and catch unregistered dogs roaming the streets.

We don’t pay them rates so they can act like a Miss Universe contestant whose ambition in life is to foster world peace while humming a couple of bars of Kum-Bah-Yah.

No one disputes the sad fact that Australia is surely the most over-governed country in the world.

Not only that, but we are increasingly governed by collectives of virtue-signallers – people who have the need to loudly proclaim their moral values and preach them incessantly until everyone else understands just how morally superior they are.

And so we have a succession of federal and state governments spending hundreds of millions of our dollars every year on advertising crusades – sorry, “public safety awareness campaigns” – imploring us to drink wisely, eat healthily, walk regularly and drive safely.

Sure, you can argue some of those campaigns might have raised awareness about important issues.

Now I think about it, I’m certainly seeing fewer fat people driving drunk on the wrong side of the road while eating salt-laden hamburgers and washing them down with full-strength Coke.

Of course domestic violence is an enormous problem facing this country.

No one disputes its hideous impact on victims, or that we need a united approach to stamping it out that will involve an offensive on the cultural, gender and psychological fronts.

A lame sign on the side of a road already cluttered with too many hoardings isn’t just simplistic.

It demeans a topic that demands depth and courage, not flippancy.

But then, that is the standard we have come to expect from many of our local councillors.

All of you surely know by now that this is also the time of the year when the nation plays its annual game of “Which inner-city council of hand-wringing virtue signallers will try and ban/shift/rename Australia Day?”

In Melbourne, the City of Port Phillip has passed a motion to mark Australia Day with a “morning of mourning” before going ahead with an Indigenous welcome and citizenship ceremonies.

In Sydney, the Inner West Council has voted to scrap its Australia Day celebrations, including planned fireworks and a “Citizen of the Year” presentation.

Again, Australia Day is a fraught issue for many indigenous and non-indigenous Australians who quite justifiably resent its presence as a day of national celebration.

It’s a view that all of us should take into consideration.

But it’s not the sort of topic with which our thousands of trumped-up, power-lusting local government representatives should be concerning themselves.

The timing and tone of Australia Day – and even more importantly, a greater appreciation of the generational trauma experienced by the First People of this country since settlement – is a national issue that should be debated and recognised by all Australians.

Potholes. Bins. Footpaths. Those are the priorities for our councillors across the more than 500 – yes, 500 – “cities” and “shires” that make up our third tier of government.

When they finally achieve some skill in that area – and there is no sign yet of any proficiency gains despite more than a century of Federation – then perhaps our councillors could bestow their incredible insights and powers of reasoning on a subject quite close to the hearts of all ratepayers and concerned citizens.

Their task? To examine the three bloated layers of government in this country.

To tally up the billions of dollars it costs us because of all the duplication and bureaucratic waste.

To understand that a great nation is the sum of its people, not those who govern them.

Given their confidence in their intellectual powers and ability to reason, it shouldn’t take them long to conclude that the best motion they could ever pass would be to vote themselves out of existence.

And that, surely, would be a declaration worthy of any roadside sign.

Garry Linnell: The warning signs that local government has to go