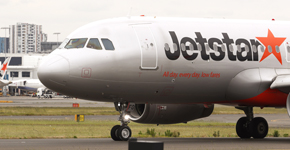 Jetstar pilots are threatening to walk off the job at Christmas time, potentially leaving thousands of travellers stranded at the busiest time of the year.

Pilots working for the budget airline say they are fed up with their salaries, working conditions and with rostering practices they say leave them exhausted.

A breakdown in negotiations over a new enterprise agreement was the final straw that prompted the Australian Federation of Air Pilots to apply to the Fair Work Commission to hold a vote among Jetstar pilots on taking industrial action.

Proposed actions could include pilots refusing to work any longer than their rostered hours – or stopping work altogether for up to 24 hours.

The New Daily understands Jetstar had offered to continue giving its pilots 3 per cent annual wage increases, but the union’s proposal would drive a 15 cent increase in pilot costs – well beyond what the airline was prepared to offer.

AFAP executive director Simon Lutton said Jetstar pilots had been “left with no choice” but to consider taking protected industrial action that could affect the peak Christmas holiday travel period.

“Jetstar pilots are the lowest-paid jet airline pilots employed by the four major carriers operating in Australia and they are tired of not being valued as highly as their peers at other airlines” Mr Lutton said.

“Jetstar pilots are paid significantly less than their counterparts at Tigerair, Virgin and Qantas.”

Records show Jetstar pilots who flew up to 75 hours a month in the past financial year were paid:

A Jetstar spokesperson told The New Daily it was “very disappointing” the pilots’ union had sought a vote on industrial action given the airline had been discussing a new enterprise agreement since January.

“There are many complex areas to discuss and working through the AFAP’s numerous claims and their many modifications takes time,” he said.

“We remain committed to reaching an agreement for a new EBA to support the great work our people do every day, but not at any cost.”

The low-cost airline operates routes to all Australian capital cities, as well as many international and domestic holiday destinations.