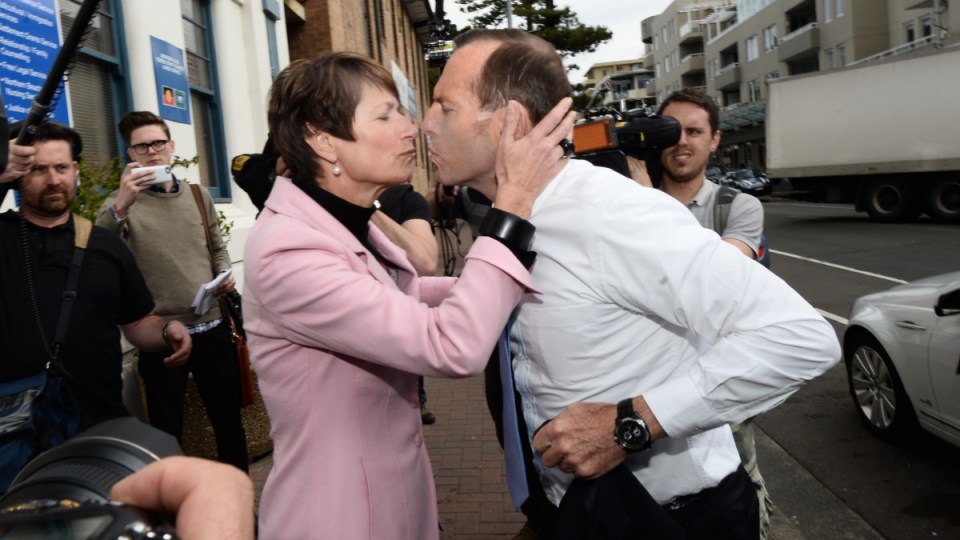 The biggest names in Australian politics have hailed Tony Abbott as a warrior and “servant of our nation” at a gala dinner in the former prime minister’s honour.

But as the ousted member for Warringah basked in the adulation of conservative VIPs such as John Howard and Scott Morrison, there was one noticeable absence – other than nemesis Malcolm Turnbull.

Mr Abbott’s wife Margie, usually by his side, did not attend the event and MC Alan Jones explained why, revealing she had recently undergone a lumpectomy to remove breast tissue.

The radio host added she was “recovering well” in hospital.

Mrs Abbott was a supporter of breast cancer organisations during the couple’s time at Kirribilli House and in 2014 revealed her grandmother had died from the disease, emphasising the importance of regular mammograms.

Mr Abbott said his wife would not be held back.

“All of you, I think are quite rightly anxious but I just wanted you to know that within two days of being diagnosed, she walked 100 miles,” Mr Abbott said.

“She is one tough woman and she will get through this.”

“What a night. I keep thinking: what if I had actually won?,” Mr Abbott joked after taking to the stage.

Mr Morrison opened his speech with “how good is Tony Abbott?”, before telling the crowd: “Don’t be too quiet tonight, quiet Australians”.

Mr Abbott said he and Malcolm Turnbull owed Mr Morrison a “tremendous debt” after his election victory which saved the federal government with his “near miraculous” win in May.

“Had we lost this election, this government would have been judged an embarrassing failure,” Mr Abbott said.

“So I might have started it – but frankly Scott, you have saved it.

He paid tribute to his border protection work and the “warmth” he brought to issues such as Indigenous policy.

“Tony and I didn’t always agree on some issues, but you always knew that Tony’s heart was in what he espoused and what he believed in,” Mr Howard said.

The former prime minister told the crowd that fundamentally, they were honouring “a servant of our nation” who “has lived his life for others”.

He said in his time as prime minister, Mr Abbott laid the foundation for the government, scrapped the carbon and mining taxes, and, in “one of his finest moments”, brought back the Australians killed in the downing of MH17.

Mr Dutton, meanwhile, said Mr Abbott was “one of the most intelligent people in the life of our nation”.

Why Margie was missing from Tony Abbott’s big night