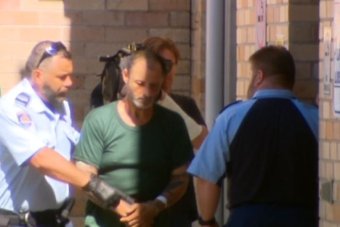 A Sydney mechanic who rescued a young girl being raped by a convicted sex offender has told a court the man deserves “a life of pain, darkness and misery” for his crime.

Anthony Sampieri, 55, was on parole when he choked and sexually assaulted the seven-year-old in a locked toilet cubicle at a dance studio in Kogarah last November.

Diesel mechanic Nick Gilio intervened and as he rescued the girl, he was stabbed several times by Sampieri with a scalpel.

Mr Gilio today read a victim impact statement to the District Court at Darlinghurst, saying he still has flashbacks to the evening despite 10 months of counselling.

Mr Gilio said he was constantly “on edge”, checking windows and doors of his home, and worried about other children being vulnerable.

Staring down Sampieri, Mr Gilio said the trauma inflicted that evening made him feel like “a huge part of me died” and he had changed from an optimistic and active man to a frightened, pessimistic one.

“I hope your incarceration leads you to a life of pain, darkness and misery,” he said.

“There is no forgiveness or rehabilitation for what you have done.

“For the consequences of your actions, you must suffer.”

Mr Gilio also contended with physical pain as he carried out his job as a diesel mechanic, he added.

Judge praises mechanic for his actions

Outside court, Mr Gilio called for a life sentence to be handed down.

“Always being mindful that there is a little girl who’s suffering probably a little bit more than all of us,” he said.

“We need to keep that in mind and we need to get some justice.”

Mr Gilio said he thought any other father would have intervened in the same way.

“We should be looking out for not only our children, but all members of our community,” he said.

“It was an incredible act of bravery on your part to come to the rescue of this child,” he said.

Sampieri, who pleaded guilty to the crime in June, hung his head throughout the hearing.

He has also pleaded guilty to seven charges relating to 94 obscene phone calls to women in the lead-up to the rape, between August and November 2018.

A police officer who interviewed Sampieri one month before the attack is also facing charges over allegations he neglected his duties.

Senior Constable Andrew Bruce will return to court on November 18.

Sampieri would have been in custody if he had been charged over the obscene phone calls, according to Police Commissioner Mick Fuller.

Sampieri will next face court on December 9.