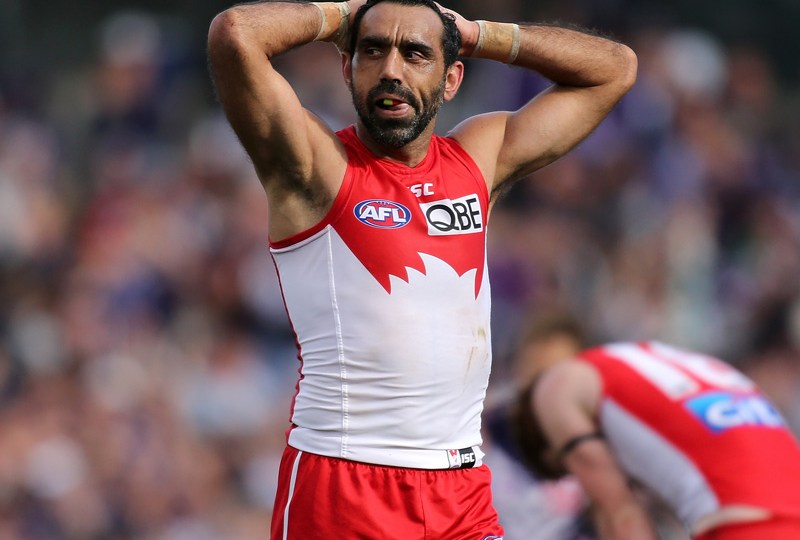 Adam Goodes was hounded from the game. Photo: Getty

The director of the documentary depicting the booing scandal that ended the career of indigenous AFL legend Adam Goodes wants to sit down with Prime Minister Scott Morrison.

Ian Darling was inspired to make the film after watching Goodes get relentlessly booed in the 2014 AFL grand final between Sydney and Hawthorn.

The Australian of the Year and Swans icon polarised crowds after taking a stand against racism and was effectively booed into retirement.

The documentary has received critical acclaim and is being shown in schools across Australia, but Darling says he has heard from just one politician, Labor MP Linda Burney.

Every AFL club has seen The Final Quarter, which was publicly broadcast in July.

Darling has called on the Prime Minister to include it in the national curriculum.

“It takes a long time to put something on the curriculum so what we’ve done with philanthropic funding is we’ve made it available for every school and sporting club,” Mr Darling said.

“But we do want to have a conversation with the prime minister and the opposition leader and I think every politician will get something from it.”

Darling said everybody from AFL boss Gill McLachlan to students in year five had come away from the film with a deeper understanding of what transpired.

“Literally every coach, everyone who is close to the game never really understood what it was,” he said.

“With the benefit of time and hindsight we can go back and actually ask the questions: Why did it happen? Am I part of the problem and how can I be part of the solution?

“I think from the Prime Minister down, those are conversations that every Australian needs to have.”

The film only uses archival footage but was made with Mr Goodes’ blessing.

He approved the documentary after seeing it by himself but told Darling he could never watch it again.

Darling said the most heartwarming responses had been from teachers and students.

“It’s giving kids a language about how to identify not only their own behaviour but what racism is,” he said.

“What we’re trying to do is just enable everyone to understand that we are all capable of racism.

“We all have an unconscious bias just having been brought up in Australia, it’s there.”

Darling said it was well within people’s grasp to address casual racism.

“If that stops it’s a giant leap ahead in terms of our ability to control racism in this country,” he said.

“That’s why I think the power will be in this next generation in the schools.”