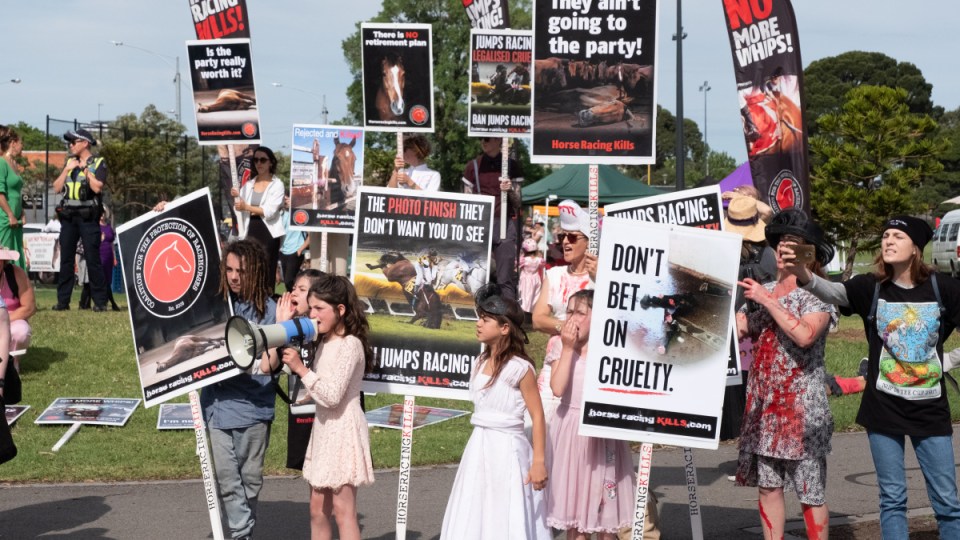 Championed as “the race that stops a nation”, the Melbourne Cup has this year ignited fierce debate between animal rights activists and long-time racegoers.

Despite the threat of disruption from protestors, the event went ahead as planned on Tuesday – but there was no denying a noticeable shift in the attitudes of some punters.

Figures released on Tuesday night showed attendance at the Cup had dipped for the fourth year in a row, with 81,408 racegoers through the gates at Flemington. Last year’s rain-affected event attracted 83,471 people to the track.

The controversy didn’t detract from the fun for some high-profile guests, including Nadia Bartel who said the event was even better than past years, and Kerri-Anne Kennerley who urged the media not to make out the whole racing industry was behind the “cruel” treatment of horses.

On Tuesday, crowds of protestors carrying signs that read ‘Horse racing kills’ shouted “Say Nup to the Cup” to those arriving at Flemington Racecourse.

Animal rights protesters outside Flemington this morning as punters head into the racecourse. “Open your mind, make a difference,” one woman is saying to the parked cars #MelbourneCup2019 @GuardianAus pic.twitter.com/cQOuclkHlL

While scenes at the track were mild, it seems the flaring debate has turned ugly in some offices. In one example revealed on Tuesday, a wine shop owner in Melbourne’s inner north was left shaken on Cup eve after a customer spat in his face when he offered her a part in his Melbourne Cup sweep.

Concerns over the welfare of animals in sport is nothing new, but until recently the community was kept in the dark about the extent of the grim reality of the fate of horses used in the Australian racing industry. It’s been revealed that huge numbers of retired thoroughbreds are being abused, sent to slaughterhouses and turned into dog food.

So far this year, 122 racehorses have been killed from racetrack injuries, according to Coalition for the Protection of Racehorses.

Last year, Irish horse The Cliffsofmoher was euthanised on the track after breaking its shoulder during the Melbourne Cup race.

This year, Rostropovich – the racehorse who finished last in the Melbourne Cup – sustained a suspected cracked pelvis.

Racing Victoria Stewards advise that Rostropovich was inspected by RV veterinarians following the running of the Melbourne Cup and was found to be lame. pic.twitter.com/PTN7VTHdQH

The controversy didn’t turn off high-profile Spring Racing devotees like fashion blogger Nadia Bartel, who said the event was “better this year”.

“The marquees are beautiful, people are dressed up and excited,” Ms Bartel told The New Daily at Flemington Racecourse.

Bruce Keebaugh, director of The Big Group catering company that provides food service to a dozen marquees at the Cup, agreed with Ms Bartel.

“No offence but I feel the media is 12 months behind,” Mr Keebaugh said.

“This is the biggest year we’ve ever had.”

“My experience over 35 years is the people who love racing love their horses,” Mrs Kennerley told The New Daily.

“There will always be randoms… and they will be cruel. They are just cruel people. (It is) a very small minority and it does not reflect on the people who do the right thing.”

Beyond the swanky Birdcage marquees, attitudes amongst the general public showed signs of changing.

Melbourne Cup racegoer Lauren Symons said she and her friends had discussed “where the horses end up at the end of the day”, but said the event was “more of a social thing for us”.

Visiting from Montreal in Canada, Isabelle Girard and Luc Tanguay said the first time they had heard about racehorses abuse was when Taylor Swift cancelled her Cup performance earlier this year.

“We were talking about it on our way in, but we don’t know,” Ms Girard told The New Daily.

– “But where do you draw the line?” Ms Tanguay said.

Sydney man Steve, who did not want his surname to be published, said the Melbourne Cup was “a bit like Australia Day – it’s tacky”.

“It’s gotten so out of hand,” Steve said.

“The double standard is off the charts – we’ve got bars and clubs shut down in New South Wales for that kind of behaviour but you go to the races and every man and his dog is on it and there aren’t even any sniffer dogs.”

Will the Melbourne Cup ever be shut down?

The tip is no – at least not if the event keeps raking in huge amounts of money.

The combined four days over the 2018 carnival produced a record $447.6 million in gross economic benefit to the state, up almost 20 per cent since 2014. 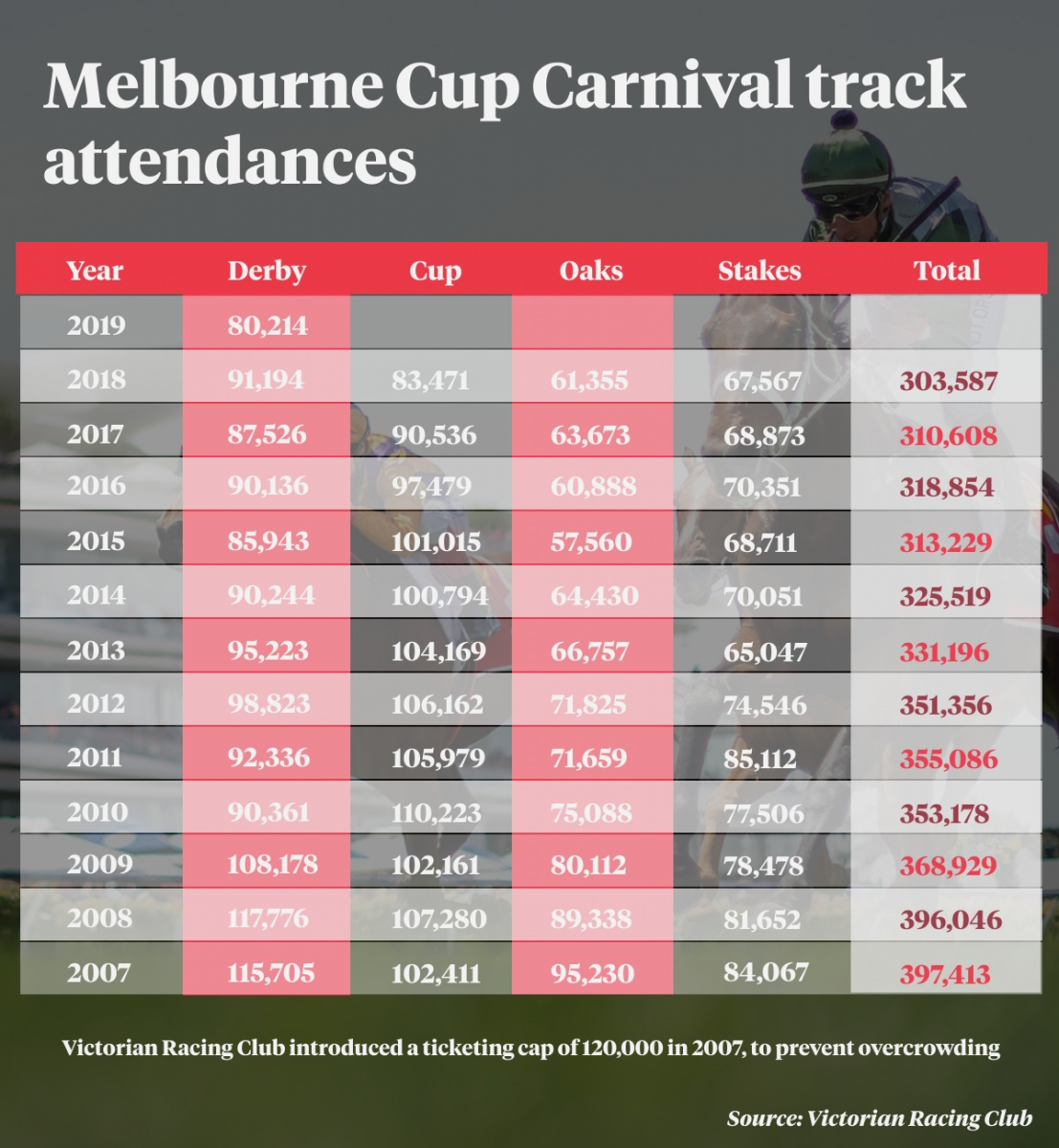 Major industries that employ tens of thousands of people, such as tourism, retail, fashion, hospitality and accommodation, make millions of dollars off the Melbourne Cup Carnival every year.

Last year, racegoers spent $62.9 million on retail in Victoria, up from 10.4 per cent the previous year.

During last year’s carnival, Australian gamblers – some of the biggest on earth –  lost $45.26 million by placing bets on horses.

Nup to the Cup: Is this the race that divides the nation?