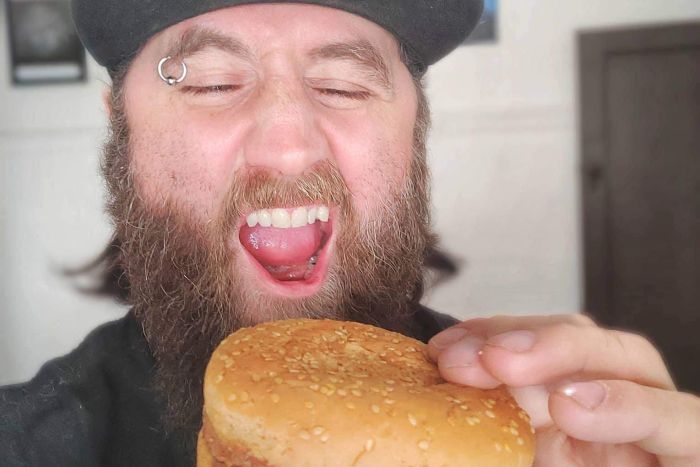 Casey Dean with the infamous burger he purchased when he was 14. Photo: Casey Dean

A decade-old McDonald’s cheeseburger in Iceland gained worldwide attention over the weekend, but an Australian quarter pounder is about to turn 25.

A cheeseburger — showcased under glass as “the last McDonald’s cheeseburger sold in Iceland” — became an internet sensation as it celebrated its 10th birthday on Friday.

Thousands of online users have followed its live stream slow decay, while tourists regularly pose for selfies with the burger and its side of fries that are on display like a work of art inside a glass case at Snotra House hostel in Iceland.

But Australian’s Casey Dean and Eduard Nits say their quarter pounder is about to hit a quarter of a century.

“I think they’ll have a hard time catching our burger, but good luck to them,” Mr Dean said when asked about his ancient burger’s Icelandic baby brother.

In 1995, the two friends bought burgers at their local McDonald’s store in Adelaide.

Fast food was a rare treat for the then-14-year-olds, so Mr Dean said they bought “a ridiculous amount of McDonald’s because we could”.

With one burger left, a friend visiting from interstate said, “Hold onto it for me until I come back”. 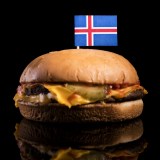 “He never came back so we still have the burger,” Mr Dean, the burger’s current custodian, told the ABC.

What started as a personal joke, and something to “gross out” their friends, gained worldwide fame in 2015 after the pair discovered the burger, which had been living in the back of Mr Nits’s sister’s shed, still looked exactly the same on its twentieth birthday.

“It’s as hard as a rock,” said Mr Dean, adding that it has never smelt at all.

“It still looks the same but it’s just like a brick. You could knock someone out with it.”

Now known as the “senior burger”, the not-so-happy meal has its own Facebook page titled Can This 20 Year Old Burger Get More Likes Than Kanye West? and a song titled Free the Burger written about it.

It once had its own website and a Tinder profile, but the pair said they had to shut those down because managing the responses and fan mail was turning a joke into a full-time job.

The American chain closed its only three branches in Iceland during the subarctic island’s financial crisis in 2009, making it one of the only Western countries without a McDonald’s.

Just before the restaurant’s closure, Hjortur Smarason bought a cheeseburger meal for conservation.

“I decided to buy a last meal for its historical value since McDonald’s were closing down,” said Mr Smarason, who works as a communications manager.

“I had heard that McDonald’s never decomposed so I just wanted to see if it was true or not.”

He first kept the meal in his garage but then lent it to the National Museum of Iceland, after which it was moved to a hotel in the capital Reykjavik for a while.

“People from around the world … come here just to visit the burger,” said Sigurdur Gylfason, the owner of the establishment.

Addressing common claims that its burgers appeared immune to decay, McDonald’s said in 2013 that “in the right environment, our burgers, like most other foods, could decompose,” adding that “specifically moisture” was necessary.

With sufficient desiccation, they were “unlikely to grow mould or bacteria or decompose”, the fast-food franchise said.

Bjorn Adalbjornsson, a senior lecturer at the University of Iceland’s faculty of food science, said without moisture, “food will simply dry out”.

“There is nothing insidious about the content of McDonald’s food here,” he told the ABC.

“It is simply a matter of low moisture and high salt content of the food.”

Dr Crowe said food has been preserved in this way for thousands of years, citing dried fruit as a classic example.

“There are many better food choices for their nutrition than fast-food burgers and fries, but there is nothing to be alarmed about such food standing the test of time and staying well-preserved.”

According to the McDonald’s website, today’s quarter pounders contain 29.2 grams of fat, 7.9 grams of sugar and 1,080 milligrams of sodium.

After the burger was initially locked in a cardboard box to stop their mothers trying to throw it out, Mr Dean described its next 10 years of “special storage”.

“It was in a box in a garbage bag full of clothes just chucked out the back of the shed,” he said adding that “even the rats didn’t see it as food”.

Mr Dean added that he no longer eats McDonald’s burgers.

In February, the senior burger will turn 25.

“Our quarter pounder will be quarter of a century,” Mr Dean said. “It still feels like yesterday — they grow up so fast.”

“We’ll probably get it a little hat and take it to Maccas for a children’s party.”

Since launching the Facebook page, Mr Dean and Mr Nits said fans have been sending “fanart”, burger museums have been trying to buy it and media requests have been coming in from across the globe.

“I’m pretty sure the burger is the most expensive thing in my house,” Mr Dean said.

“We were talking about getting it insured. If JLo can insure her buns, we should probably do the same.”

The last interview request they received was from Russia One state television network.

It started with an email that simply said: “We want to know about burger”, but Mr Dean said the interview ended up the “crowning piece” of a somewhat anti-American documentary — his interview dubbed over in Russian with an added anti-American edge to the translation.

Shortly after, while flying to the US, Mr Dean was “drilled” by security agents at LA airport about his “Russian contacts”.

“I was thinking, ‘Why are they asking me about Russia?’ And then it clicked.”

In addition to its use in Russian propaganda, the pair say the burger has also played a role as an anti-fast food educational tool by Mr Nits’s mother, a school teacher.

Mr Dean — a musician, musical director and part-time Uber driver — still uses it to scare his young passengers out of late-night Maccas runs.

He estimates about a 60 per cent success rate.

Iceland celebrates 10-year-old McDonald’s burger, but Australia’s own is about to turn 25