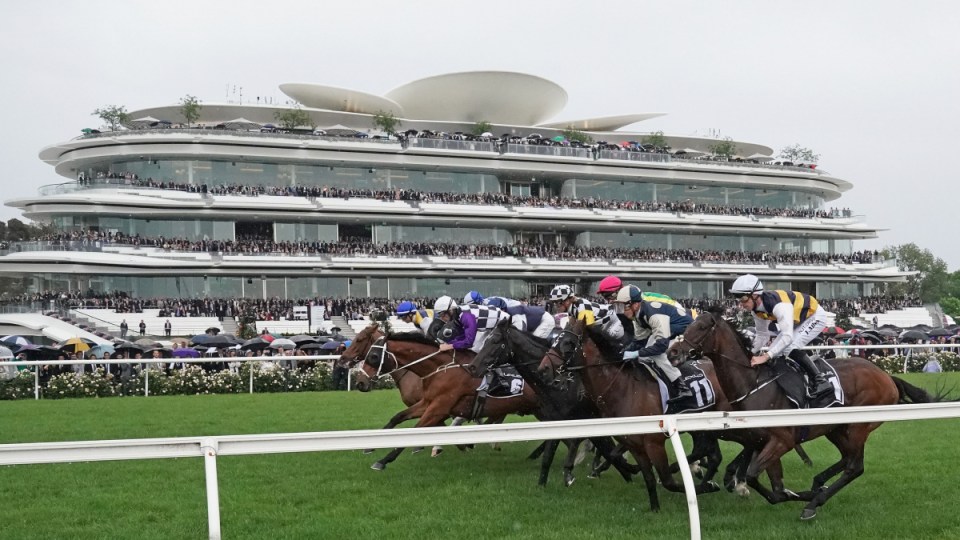 As forecast, a cold front, thunderstorms and rain swept across Victoria on Saturday as the Spring Racing Carnival kicked off with Derby Day at Flemington.

Crowds in previous years have hovered around 90,000, with a record Derby Day crowd of 129,089 in 2006 when the Graeme Rogerson-trained Efficient won in a blistering finishing to secure an place in that year’s Melbourne Cup (Efficient pulled out of the cup lineup before the race that year with a knee injury).

Victoria Racing Club chairman Amanda Elliott said at the carnival’s launch on Monday a drop in crowds at Flemington Racecourse this year would not be a surprise after revelations of animal cruelty within the industry.

However, on Saturday, the diminished crowds at Flemington were well and truly behind closed doors and windows and marquees because of the rain, preferring to watch the four group ones, two group twos and three group threes to make up the nine-race card on television sets.

It is unlikely this year’s crowd will exceed the expected 100,000 attendees to watch the Derby, first run in 1855, as Flemington’s main grandstands were half-full throughout the day.

The $2 million feature race at 3.45pm was won by veteran jockey Damian Oliver on board the Anthony Freeman-trained Warning.

Flemington’s exclusive Birdcage enclosure became a refuge for A-listers including former foreign minister Julie Bishop as 10 millimetres of rain dumped on Flemington racecourse from 9am on Saturday.

Mining magnate Gina Rinehart was also expected to return to the races after a well-documented stumble in 2016, appearing on the guest list for champagne house Mumm and Lexus, though the rain may have kept her away.

The weather bureau predicts more rain is on its way, with thunderstorms likely across parts of the state throughout Saturday afternoon.

In the 24 hours to 9am, 22.4mm of rain has fallen in McNeils Bridge in the state’s northeast.

Thunderstorm forecast for the remainder of Saturday. Thunderstorms possible in the indicated area, with concerns for potential heavy rainfall in the east and the slight risk of damaging wind gusts in the northeast. https://t.co/NuaWXuy0Nq pic.twitter.com/n0l0cVi0SI

Away from the shelter, where the most coveted accessories were the humble umbrella and plastic raincoat, celebrities chose looks inspired by old Hollywood glamour.

Full skirts, boater hats, netted veils and bows were popular choices among the ladies while men wore striped and checked suits in shades of grey.

Ms Bishop was on-trend in a black and white boater hat, pussy-bow shirt by Husk and polka dot pants from Torrance, all from Myer.

The fashion lover will practice a different kind of diplomacy at the judge’s table of the Fashions on the Field competition, where she said she will be looking out for elegant looks keeping to the race day’s dress code.

“I’ll be looking for people who may bend the rules a little but no colour. That’s non-negotiable, it has to be black or white,” Ms Bishop told AAP.

“It’s remarkable what you can do within that palette.”

Celebrity stylist Lana Wilkinson says she hasn’t seen a look she didn’t like.

“That’s the beauty of embracing classic silhouettes and accessories, it looks so elegant and timeless,” she said.

The marquee is the first of its kind to be designed with social media influencers in mind.

Its 3.6 metre high white walls were designed not to clash with guests outfits, while gold trims on the bar and furniture reflect natural light – no filter needed.

There’s even floor length mirror for outfit selfies and a floral throne.

It comes as Lexus ambassador Megan Gale joins a list of celebrities shunning the event amid well-publicised animal cruelty revelations.

A small group of anti-horse racing protesters are gathered outside the racecourse holding signs which read ‘no more whips and ‘there is no retirement plan’ and ‘is the party really worth it?’.