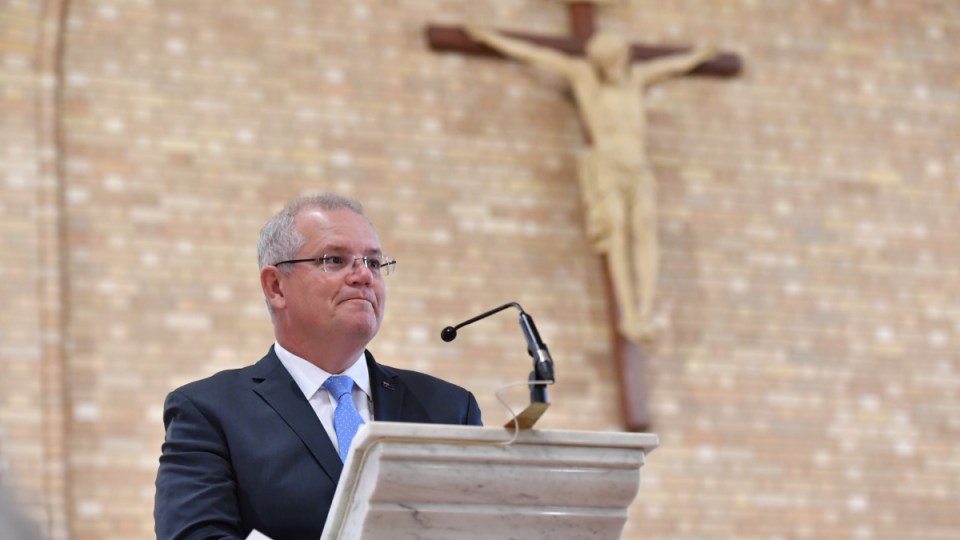 Standing in Parliament last October, Scott Morrison was visibly moved as he delivered the nation’s formal apology to the survivors of institutional child abuse.

“Ritual sexual abuse”? This was not a phrase used by the Royal Commission into Institutional Responses to Child Sexual Abuse — yet it had made its way into the Prime Minister’s historic address.

Tim Stewart is a 51-year-old father, Cronulla Sharks supporter, one-time operator of an online health food venture called Fruit Loop, a former bankrupt who came out of insolvency in 2015 … and long-time friend of Mr Morrison.

He is also a prominent promoter of the US-based far-right “QAnon” conspiracy movement that believes there is a secret “deep state” plot against President Donald Trump and a cabal of Satan-worshiping paedophiles who rule the world and control politicians and the media.

The FBI lists theories promoted by QAnon as a domestic terrorist threat in the US.

The two women were bridesmaids at each others’ weddings and, since August, Mr Stewart’s wife has been employed by the Department of Prime Minister and Cabinet on the recommendation of the prime minister’s office, working at the PM’s Sydney residence, Kirribilli House.

In the days before Mr Morrison’s apology speech, Mr Stewart claimed to have influenced the PM to make a reference to “ritual” abuse.

In the hours before the address, he sent a text to a colleague: “I think Scott is going to do it!!”.

Mr Stewart and key supporters specifically wanted Mr Morrison to use the word “ritual” because it introduced the idea of secret ceremonies with Satan’s involvement, which aligns with QAnon’s theory of global threats.

Mr Morrison’s use of the word “ritual” – instead of “systematic” or “repeated”, which are factually accurate – was picked up by an international blogger who specialises in exposing religion-based conspiracy theories, but otherwise largely unremarked.

For the Stewarts, though, it was a triumph.

The Stewarts’ 22-year-old son, Jesse – also an enthusiastic promoter of the QAnon conspiracy – tweeted: “You know #theGreatAwakening is in full swing when the Australian Prime Minister @ScottMorrisonMP mentions #RitualAbuse,” a tweet read.

And Mr Stewart’s wife has publicly signalled her support for “The Awakening”, a key QAnon concept. 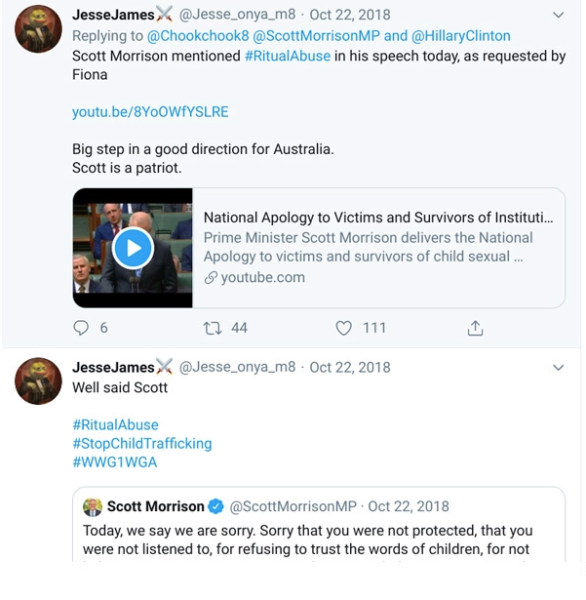 Stewart and the PM

Mr Stewart has denied he influences the PM on policy. Yet that is the opposite of what he has told at least one close confidant.

Eliahi Priest has published his encrypted text exchanges with Mr Stewart, in which there are more than 50 mentions of “Scott”.

He has signed a statutory declaration that claims Mr Stewart told him he had passed on “several” letters to Mr Morrison via Mr Stewart’s wife.

Mr Stewart is on the record telling Mr Priest of a “massive connection with Scott tonight”.

“We are moving fast,” he texted. “Scott is awakening.”

“This is going straight to Scott,” Mr Stewart responds.

‘This is going straight to Scott’: The conspiracy theorist claiming to influence Scott Morrison