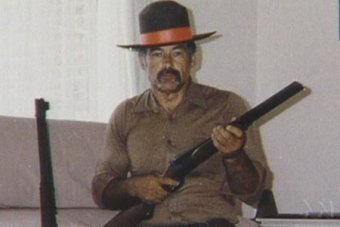 Backpacker murderer Ivan Milat told detectives he wouldn't reveal any information about his crimes even if they 'put a blowtorch' to his ears or eyes.

Maintaining his innocence until his dying days, serial killer Ivan Milat told detectives he couldn’t reveal any information about his crimes even if they “put a blowtorch” to his eyes.

The backpacker murderer died in Long Bay jail’s hospital on Sunday morning after being diagnosed with oesophageal and stomach cancer in May.

Detectives interviewed Milat eight times in jail and hospital in the weeks before he died, the Nine Network reported on Monday.

“You could put a blowtorch to me ears or eyes or whatever and … I can’t help ya,” Milat told detectives.

He insisted there was no evidence against him.

When detectives spoke of grief for his victims, he said, “I don’t care … that’s it”.

Whether detectives believe him was “immaterial” to him, he said.

“I know in my heart, in front of God or whatever, I’m quite … you know, happy with what when I say this,” Milat said.

Milat was sentenced in 1996 to seven consecutive life sentences for murdering seven backpackers whose bodies were found in makeshift graves in the Belanglo State Forest in the 1990s.

He is suspected of many more murders, including the killings of at least three people whose bodies were found in three other forests between 1971 and 1991.

But he told the detectives he could not tell them anything about the deaths of three women in the Newcastle area.

Days before his death Milat penned a letter insisting the NSW government should pay for his funeral.

He wrote a one-page letter on Thursday to his brother Bill and sister-in-law Carol with instructions for it to be sealed until his death.

In the letter, Milat asks for his belongings and legal documents to be handed over to his family, Network Ten reported on Monday.

“Please don’t pay for my funeral services or contribute in any way,” the 74-year-old wrote.

“Corrective Services NSW to fund it all – a pauper’s burial or whatever is suitable.”

Ivan Milat signed off the letter with his name and a small illustration of a figure with a halo above the word “innocent”.

“Corrective Services NSW will under no circumstances be paying for this funeral,” a spokeswoman said.

Milat’s daughter says she is “depressed” even though her father was never there for her, the Daily Telegraph reported on Monday.

Lynise Milat, 54, said the family were in deep mourning for him.

“I am really depressed over the whole thing. Everything about Ivan made me depressed,” Ms Milat told the Daily Telegraph.

“He was my dad … who isn’t sad when they lose their dad?”

“The whole world might be happy that he’s gone but I’m not. I’ve lost my dad. I haven’t been able to go out for years because of him, everyone knows who I am but now I finally can.”

Another of Milat’s brothers said the convicted murderer was evil “right to the last bone”.

Boris Milat is the only family member to speak out against Ivan.

“I am definitely embarrassed to be a Milat,” he told the Nine Network.

“To me, he died a long time ago. He’s nothing but an evil killer.”